NASA to PM Fumio Kishida: 'Come Into Space With Us - Mars Awaits!' 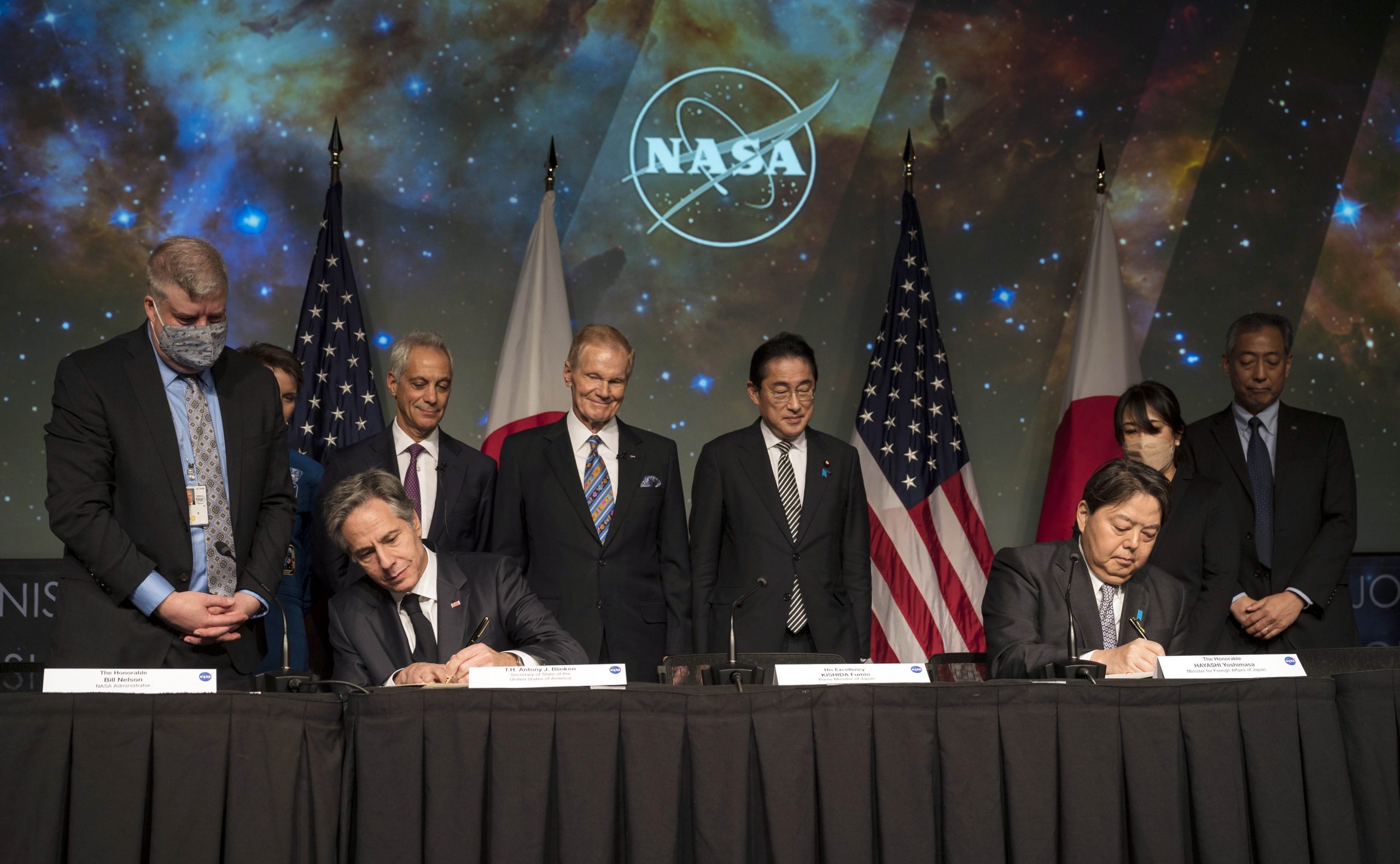 US Secretary of State Antony Blinken and Japan's Minister for Foreign Affairs, Yoshimasa Hayashi, with PM Fumio Kishida looking on, sign an agreement that builds on a long history of collaboration in space exploration between the US and Japan. Friday, January 13, 2023, at the Mary W. Jackson NASA Headquarters building in Washington. (Aubrey Gemignani/NASA via AP)

Somewhere in Japan is a young person who is destined to fly to the Moon. It is likely she is a woman and she will spend about a week exploring the lunar surface with her American colleagues, probably in 2026. This ambitious plan excites NASA's Administrator, Bill Nelson. A charismatic fellow in a flashy necktie, he relished explaining it all to the Japanese Prime Minister, Fumio Kishida and other senior politicians during their recent trip to Washington.

With a big grin on his face, Mr Nelson (who is eighty-years-old) told Mr Kishida that "our entire workforce at NASA is a group of wizards because they make the impossible possible."

He said that NASA's Artemis program intends to land the first woman and first person of color on the Moon. And if that is not enough of a thrill, NASA will "use what we learn on and around the Moon to take the next giant leap: sending the first astronauts to Mars."

I greatly enjoyed watching this performance on TV, as it reminded me of the vintage US science fiction series, Star Trek.

I was a bit too young to enjoy it when it first aired in the 1960s. But later discussions about it at my university helped arouse my curiosity about American foreign policy.

In the show, Captain James T Kirk leads a multinational crew upon the Starship Enterprise. The cast included a Scottish doctor and a half-alien second-in-command, the logic-focused Dr Spock.

Each episode of Star Trek began with the Captain reading his log. This prepared viewers for the adventure ahead. In Washington last week, Secretary of State Antony Blinken gave a speech which sounded just like the words of a starship captain.

"Our nations are both space-faring nations; nations poised to unlock the secrets of the universe," Mr Blinken told his Japanese guests.

"Space unites us," he continued. "In this era of space exploration, every announcement and advancement is not an achievement for just a single country – it is a victory for all of humanity.  And that is how the US chooses to lead in this effort with Japan and others in the 21st century, on Earth and in the heavens."

Mr Blinken then called his Japanese counterpart Yoshimasa Hayashi over to sign an agreement with him. Meanwhile, Prime Minister Kishida and other dignitaries looked on approvingly.

I checked the title of the deal on NASA's website later. It is grandly billed as:

The Framework Agreement Between the Government of Japan and the Government of the United States of America for Cooperation in Space Exploration and Use of Outer Space, Including the Moon and Other Celestial Bodies, For Peaceful Purposes.

Many representatives of the media turned up at NASA to watch the signing ceremony. They included a large contingent of reporters from Japan who had been following Mr Kishida around the world for a week.

NASA recognized this was the grand finale of their tour and wanted to make the event truly spectacular. A female NASA astronaut, Anne McClain, was available to do press interviews alongside the JAXA space veteran, Akihiko Hoshide.

Yet there were two characters missing from this episode. Vice President Kamala Harris and Mr Biden himself. In fact, Ms Harris had taken a somewhat low key breakfast with the Prime Minister Kishida before the NASA press event. During that time they had discussed space and other issues relating to technology.

Mr Biden had hosted Mr Kishida at the White House, where they sat beside a roaring fire. For the benefit of the TV cameras, Mr Biden waved his finger at his guest at the beginning of the meeting. The President mentioned Japan's new defense plans and said:

Let me be crystal clear: The United States is fully, thoroughly, completely committed to the alliance. And, more importantly, to Japan's defense.

Mr Kishida responded rather formally, using remarks that sounded as though they had been carefully prepared. He said that: "Japan and the US are currently facing the most challenging and complex security environment in recent history."

Rather frustratingly from the perspective of the Japanese reporters, there was not a joint press conference involving the two leaders.

I am certain that this was a decision taken by the White House following a horrible clash between the press and the president the previous day. At that time, Mr Biden had been hoping to talk about the economy.

Instead of allowing him to take credit for a dip in the inflation rate, the American reporters bombarded him with questions about classified documents. Just before that time a new cache had been found at his private home in Wilmington, Delaware.

Mr Biden had previously described Donald Trump's alleged mishandling of classified material as "totally irresponsible." This time, he told the reporters the documents were in a garage next to his 1960s Chevrolet Corvette sports car.

"My Corvette is in a locked garage, Okay? So, it's not like they're sitting out on the street," said Mr Biden - as if that distinction made it all Okay.

He promised a further update on the topic soon, "God willing."

A joint press conference with Mr Kishida would have been used by the American media as an opportunity to interrogate the president on the issue.

Press advisors realized this could have potentially left the Japanese prime minister edited out of footage shot on his first official visit to the White House - which would not have been good for diplomacy.

Mr Biden's team were therefore happy to let other people distract media attention from the secret documents scandal. As diversionary tactics go, the promise of a trip to Mars is quite effective.

There is a very clear connection in the minds of the senior Americans in the Biden administration between glamorous space missions and the defense of the US and its allies on Planet Earth.

As Antony Blinken put it following his discussions with Japan's foreign and defense ministers: "We're working to deepen our cooperation across every realm – land, sea, air, and yes, space, cyber and outer."

The implication is that if a Japanese target is attacked from space, the Americans would respond to act to meet the common danger.

The United States and Japan both rely on space technology for a range of civil and military functions. It is therefore natural that they should want to protect each other's satellites from enemy action and maintain sophisticated spy networks in space.

All this fits neatly with the National Security Strategy, which was announced by Japan on December 16, 2022, last year. It places strong emphasis on integrated deterrence and close cooperation with the US.

I cannot help feeling, though, that the project is not quite as collaborative as the fantasy world of the USS Enterprise in Star Trek.

Mr Kishida said after meeting Mr Biden that "we were able to deepen our personal trust toward each other."

However, was he not rather alarmed that the President seemed to have carelessly forgotten about the top secret intelligence briefings, left lying in his garage, next to his beloved 1967 Corvette Stingray?

If this was a science fiction series, Starfleet Command would have quickly stepped in to hold the Captain accountable for such a misdemeanor.