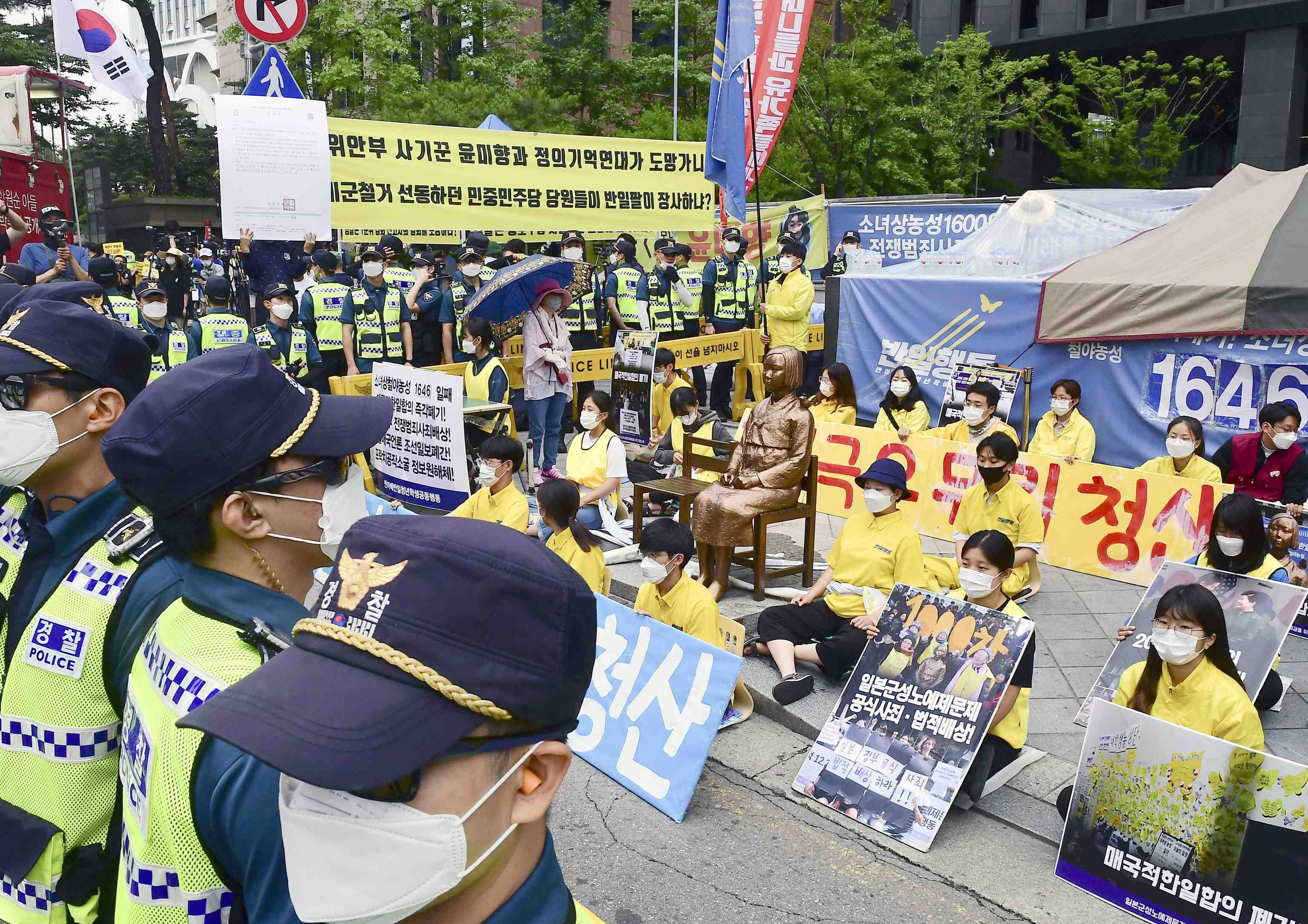 The relationship between South Korea and Japan is rife with misunderstandings. In 1910, after 10 years as a protectorate of Japan, Korea was formally annexed by Japan with the signing of the Japan-Korea Annexation Treaty. This relationship continued to the end of WWII.

Many Westerners, including Americans and Europeans, have been led to believe that this was accomplished by military invasion and that Koreans were subjected to brutal treatment and exploitation. While there are ample primary source documentations to refute these allegations, few make any effort in learning the truth.

With that in mind, the following objective observations of the situation then existing in Korea by an irrefutable American source may be helpful in clarifying the situation.

The source is the voluminous book Freedom Betrayed: Herbert Hoover’s Secret History of the Second World War and its Aftermath by Herbert Hoover (U.S. president 1929-1933), edited by George H. Nash (Hoover Institution Press, 2011). On pages 737-738, it provides a brief description of the situation in Korea when Japan assumed control in 1910.

It also describes what had been accomplished in Korea by the Japanese when he again visited Korea at the end of WWII:

I first visited Korea in 1910 to advise some Japanese industrialists on engineering matters. The Korean people at that time were in the most disheartening condition that I had witnessed in any part of Asia. There was little law and order. The masses were under-fed, under-clothed, under-housed, and under-equipped. There was no sanitation, and filth and squalor enveloped the whole countryside. The road was hardly passable, and there were scant communication or educational facilities. Scarcely a tree broke the distant landscape. Thieves and bandits seemed to be unrestrained.

Hoover again visited Korea in 1946, soon after the end of WWII:

During the thirty-five years of Japanese control, the life of the Korean people was revolutionized. Beginning with this most unpromising human material, the Japanese established order, built harbors, railways, roads and communications, good public buildings, and greatly improved housing. They established sanitation and taught better methods of agriculture. They built immense fertilizer factories in North Korea, which lifted the people’s supplies to reasonable levels. They reforested the bleak hills. They established a general system of education and development of skills. Even the dusty, drab and filthy clothing had been replaced with clean bright colors.

Another observation is given by University of Chicago professor Alleyne Ireland in The New Korea (E.P. Dutton & Co., 1926), which gives a detailed description of his visit to Korea during the annexation period. Some areas of improvement being made were:

The general consensus of opinion in Korea in 1922 was that Governor Saito…had accomplished notable reforms, that in the matter of education he had administered very generously to the cultural ambitions of the people, and in regard to their political ambitions he had shown himself eager to foster local self-government and to infuse a spirit of friendliness and cooperation into the personal relations of the Japanese and Koreans.

Professor Atul Kohli of Princeton University, in State Directed Development Political Power and Industrialization in the Global Periphery (Cambridge University Press, 2004), in the section on Korea, states that the average lifespan of Koreans during Japanese annexation rose from 23 years to 45, population doubled, and industrial output increased tenfold.

From the time of annexation, Koreans were accepted into the Japanese Military Academy, and during WWII many Koreans were serving as officers in the Imperial Japanese Army, commanding regular Japanese troops. A total of nine Koreans were general officers, six of them were lieutenant generals and three were major generals. This fact alone should make it obvious Korea was not a brutalized colony, it was a part of Japan. No army in the world has members from the colonies serving as general officers commanding regular troops of the colonizing nation.


Origins of Hate in Korean Society

If this is the reality, then why are the Japanese so hated by the Korean people? The answer probably lies in the then-existing class system of Korean society.

The royal family aside, at the top were the Yangban, the aristocrats. They constituted about 10% of society, were highly educated, and paid no taxes. And they ruled over the people. Next in the hierarchy were the Middle People, then the Common People, followed by the Vulgar Commoners, the Untouchables, and then Slaves.

With the annexation, the Korean royalty was accepted as members of Japan’s royal family. However, Japan eliminated the caste system and the Yangban ruling class lost their privileged status. This dominant group of Koreans had good reason to hate the Japanese.

This article is not an attempt to justify the Japanese annexation nor to minimize the humiliation of foreign domination. It is to acquaint readers with primary source information that depict the realities that existed on the Korean Peninsula. While the Japanese were very strict in their control of communist and anti-government activities, there is no reliable evidence of brutality or exploitation. Also, there are no primary source documentations, police reports, or witness statements about women being abducted into sexual slavery by the Japanese military, the so-called comfort women.

After WWII, a democratic form of government was established in South Korea under Syngman Rhea. Since its inception, the government of South Korea has promoted an anti-Japan position, which it has maintained to the present. Instead of accepting history for what it is, Koreans have fabricated their own version of history to perpetrate victimhood, resentment, and generate hate for Japan. They have been very successful in promoting this view of Japan, not only with Koreans but this Korean version is also believed by most Westerners.

That said, while the true history of the annexation may not have been as depicted by Koreans, Japan is not entirely without blame.

The imposition of Japanese rule over Korea, even if by mutual agreement between the two governments, was wrong and immoral. However, to be fair to Japan, a friendly Korea was considered a strategic necessity and, with the bankrupt and miserable condition Korea was in at the time, there is little doubt that without Japan, Korea would have come under the domination of China, Russia, or some European country, and posed a threat to Japan.

In the 1965 Agreement between the two nations, both Korea and Japan agreed all issues were settled and Japan provided generous assistance funds to Korea. Although the agreement settled all issues between Japan and Korea and made possible the rapid economic recovery of South Korea, it failed to curb the anti-Japan sentiment of the Korean people.

In 2015, Japan and Korea entered into a second agreement specifically settling the comfort women issue. In spite of these agreements, legal proceedings have continued in South Korea over the comfort women issue and WWII mobilization of Korean workers. To South Koreans, international agreements executed by the president of the country are subservient to the judgement of local courts.

In the past few years, there has been a dramatic change taking place in Japan. Prior to the presidency of Park Geun-hye (2013-2017), there was immense popularity of all things Korean in Japan. In Korean neighborhoods of Japan’s cities, there were guides welcoming and directing Japanese visitors to places of entertainment and dining. Korean TV programs were highly popular in almost every Japanese home. This popularity abruptly ceased with the renewed anti-Japan vitriol on the international scene by President Park. Yet, even then, it did not result in any anti-Korean hate movement.

Koreans in general, unlike the stoic and unemotional Japanese, are very sensitive and also embody a culture of resentment. In the past, their strong anti-Japan stance did not seem to affect the Japanese.

The WWII generation of Japanese must have felt a special kinship with Koreans. However, to many Japanese of today, the nation of South Korea is just another country, not a nation of people once considered as one with the Japanese.

The Japanese government has also changed. The passive, apologetic foreign policy of Japan is a thing of the past. As a reaction to Korean insults, there is a rising groundswell of anti-Korean sentiment in Japan. This is beginning to have an economic impact on imports of Korean goods. Although there is no organized boycott and some Korean items remain popular, in general Korean name brands are having a difficult time in the Japanese marketplace.

Only South Korea can stop this widening gulf between the two nations. To Japan, Korea is not just another country. They have a special relationship and the history of the two nations is intertwined since time immemorial. Japan’s royal family have connections there. Korea was the source and bridge of much imported Japanese culture and knowledge.

The Japanese should make extra effort to understand the tragic history of the Korean people and not react with hate. The Korean government does not represent all Koreans. While South Korea is a democracy, it is a democratic dictatorship where one is not allowed to voice opinions not in agreement with the popular viewpoint. South Koreans who do not hate Japan risk their well-being if found out.

It is important for Japan to know that all Koreans do not hate Japan. Let us pray for the day when the two nations can relate to each other in true friendship and mutual trust.

Find other articles by the author, including those related to the relationship and history between Japan and South Korea at this link.