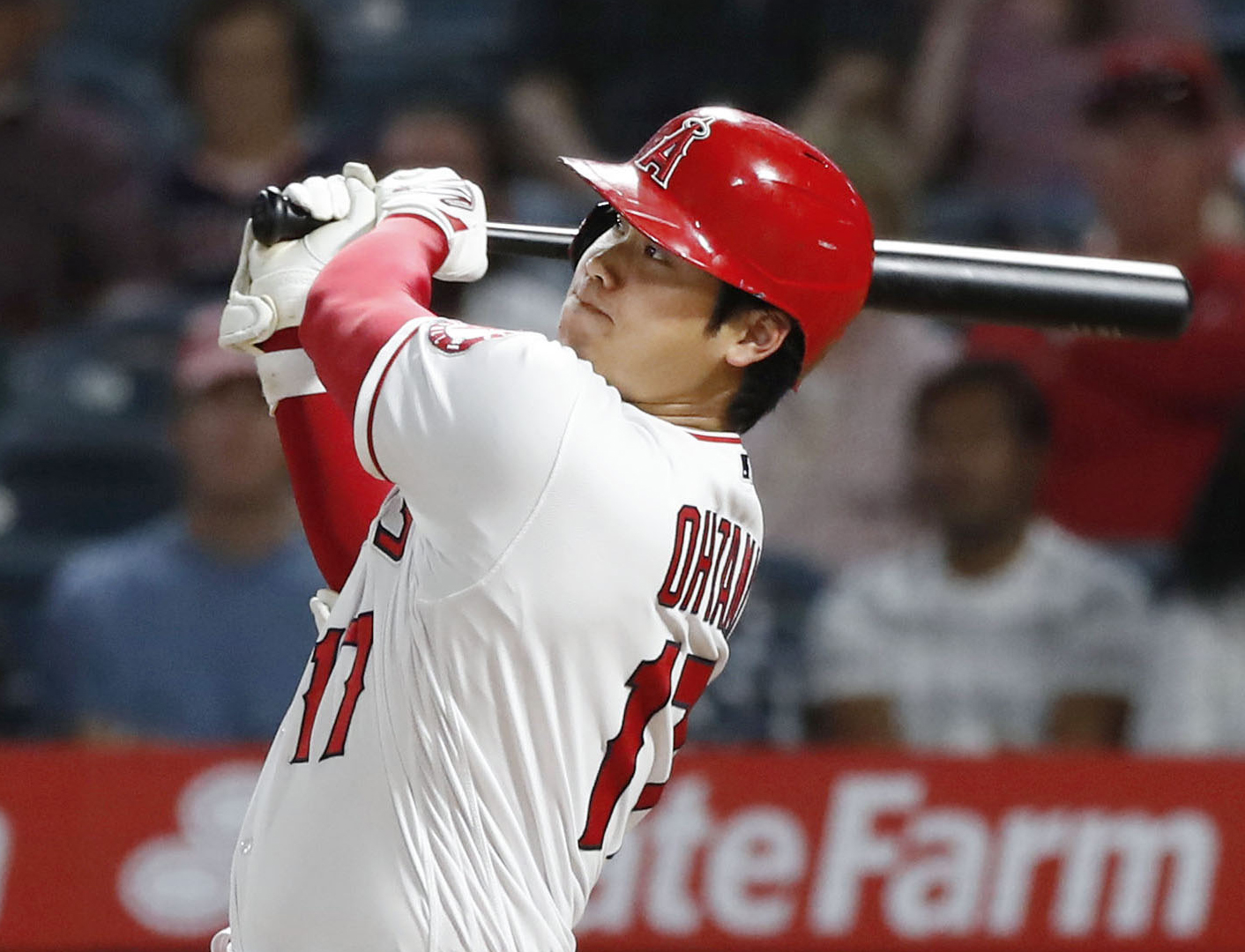 When the Los Angeles Angels signed Shohei Ohtani in December 2017, they knew what they were getting: a dynamic two-way star.

Four seasons into his Major League Baseball career, Ohtani has scratched the surface of his tremendous potential. He’s become a true international superstar, a must-watch athlete, a fan favorite at every ballpark he plays in.

Healthy and penciled into the lineup on a daily basis for the first time for an entire MLB season, Ohtani wowed baseball fans and delivered daily highlights in an era of 24/7 news coverage augmented by social media. (For more on Japan’s other MLB players, see below.)

Ohtani, 27, finished one victory shy of becoming the first MLB player since a Boston Red Sox standout named Babe Ruth in 1918 to have 10 or more wins and at least 10 home runs in the same season. The Bambino slugged 11 homers and went 13-7 as a pitcher in 1918, his next-to-last season as a regular pitcher.

He was No. 2 among AL players in extra-base hits (80), and trailed only Vladimir Guerrero Jr. of the Toronto Blue Jays and Kansas City Royals star Salvador Perez in home runs (48 apiece). He led the AL in triples, was No. 2 in slugging percentage (.592) and third in walks (96, which included an AL-most 20 intentional walks). He also struck out 186 times, which was fourth among AL players. He stole 26 bases and was tied for the league lead for the most times caught stealing (10). And he had an outside shot at becoming MLB’s first 50-30 player.

Armed with an electrifying fastball and a devastating split-fingered fastball, Ohtani went 9-2 with a 3.18 in 23 starts for the Angels (77-85), who finished fourth in the AL West for the fourth straight year.

In Ohtani’s final start of 2021, he had 10 strikeouts and no walks in seven innings against the Seattle Mariners on September 26. He allowed five hits and one run, a game-tying solo shot to Jarred Kelenic in the seventh, and the Mariners won 5-1.

“He was really good and he’s been like that,” Angels manager Joe Maddon was quoted as saying by MLB.com. “He’s been so consistent and he’s pitched like an absolute ace. He had really good stuff and finished strong. He can throw a strike when he wants to. He’s becoming that guy, and he’s just getting better.”

It all added up to a headline-grabbing season for the native of Oshu, Iwate Prefecture, known throughout the baseball world as “Shotime.”

In the MLB All-Star Game, on July 13 at Coors Field in Denver, Ohtani served as the AL starting pitcher and was hitless in two at-bats as the starting designated hitter, with MLB amending the game’s rules to give him a chance to handle both tasks. The uniqueness of the double duty assignment added a palpable buzz to the game, a day after he demonstrated his power-hitting prowess in the Home Run Derby.

Ohtani, whose two-year contract expires after the 2022 season, made $3 million USD this season. He told reporters in late September that he’s frustrated that the Angels haven’t been a playoff contender during his four years with the team.

“I really like the team, I love the fans and the atmosphere as a team,” Ohtani said at the time. “But more than that, I want to win. That’s the biggest thing for me. I’ll leave it at that.”

Ohtani is scheduled to earn $5.5 million next season, and he’s keeping an open mind to signing a contract extension.

“Of course I’ll be very open to negotiation. I mean the team is supporting me for these whole four years and I’m really appreciative of that,” Ohtani said on Sunday, September 3, the final day of the regular season, through an interpreter, according to The Associated Press.

“Whether or not there’s any contract extensions I just want to, like I said earlier, be ready and be ready for next season.”

While Ohtani far surpassed Hideki Matsui’s home-run record for Japanese MLB players (31 in 2004 for the New York Yankees) and made a spirited run at the home-run crown, his compatriots experienced lots of ups and downs in the big leagues this year.

In addition, the Blue Jays cut veteran reliever Shun Yamaguchi, who pitched for them in 2020 (2-4 in 17 games, 8.06 ERA) in February. He signed with the San Francisco Giants and posted an 0-3 record with a 6.17 ERA for the Sacramento River Cats, the Giants’ Triple-A affiliate, before returning to Japan to play for the Central League’s Yomiuri Giants.

Boston reliever Hirokazu Sawamura, who recently spent two weeks in isolation after testing positive for the coronavirus amidst a COVID-19 outbreak on the team, was the lone Japanese player to advance to postseason play. The Red Sox and Yankees (with identical 90-72 records) met in the AL Wild Card Game on Tuesday, October 5. The Red Sox advanced to the AL Division Series with a 6-2 victory over the Yankees.

Sawamura had a dependable season for the Red Sox, going 5-1 with a 3.06 ERA in 55 appearances covering 53 innings. He picked up his fifth victory on September 19 as the Red Sox made a late-season push to secure a playoff berth.

Looking at the collective performances of Arihara, Darvish, Kikuchi and Maeda, there was a unifying thread: falling short of expectations.

Arihara, for instance, underwent shoulder surgery in May to deal with an aneurysm. He missed nearly three months of the season, then made three starts in September. In the final start of his MLB rookie season on September 15, the 29-year-old was tagged for eight hits and six runs in four innings against the Houston Astros.

It started out on a high note for Darvish, who improved to 7-2 on June 21 after a two-hit, one-run, 11-strikeout, six-inning outing against the rival Dodgers.

It ended with a noticeable dip in performance. He allowed four or more runs in nine starts over the final three months of the season and won just one more time, on September 8 against the Angels.

Kikuchi, the Mariners’ lone All-Star Game representative, though he didn’t play, won six of his first nine decisions to open the season, then lost six of his final seven decisions to close out his third MLB campaign.

There’s speculation that Kikuchi, 7-9 in 29 starts with a 4.41 ERA in 157 innings, will be moved to the bullpen next season. But there’s no guarantee he’ll be back with Seattle, which has to decide whether to pick up the four-year, $66 million USD option on his contract.

Maeda, like Darvish, a Cy Young Award runner-up in 2020, underwent right elbow surgery on September 1. He’ll likely miss most of the 2022 season. The 33-year-old, who is under contract with the Twins through 2023, was 6-5 with a 4.66 ERA in 21 starts before injuring his elbow. Maeda’s pitching control was noteworthy, giving up 32 walks in 106⅓ innings while striking out 113.

Twins president of baseball operations Derek Falvey spoke about the team’s outlook concerning Maeda’s recovery from surgery in a press briefing on September 1.”

“Obviously [with] these things you have to see how the rehab goes,” Falvey said, according to a twincities.com article. “If everything goes according to plan, I’m hopeful that he’s pitching [at] some point next year. But we won’t know that now for a number of months.”

The bottom line: It was a disappointing season for Japanese pitchers in MLB.

Japanese Batters Deal with Obstacles, Too

Cincinnati Reds outfielder Shogo Akiyama sustained a hamstring injury in spring training and didn’t make his season debut until May 7.

He received playing time at all three outfield positions and as a pinch hitter, appearing in 88 games.

A .301 career hitter during nine seasons with NPB’s Saitama Seibu Lions, Akiyama has fallen short of expectations at the plate in his first two MLB seasons, including a .245 average in 2020. He’s signed for one more season with the Reds.

By the time the regular season wrapped up, Tsutsugo had appeared in a combined 81 games for the three clubs, exactly half a season’s total.

What began with a dreadful offensive performance for the Rays (.167 in 26 games) and hardly enough time to get adjusted to his surroundings with the Dodgers (12 games, .120 average) turned into a positive finish with the Pirates.

Tsutsugo, who played first base, third base and outfield in 2021, batted .268 in 43 games for Pittsburgh and had all of his extra-base hits this year with his third team. The totals: eight doubles, one triple and eight homers.

In the final analysis, there were more than a few highlights for Japanese players not named Shohei Ohtani this season, a smattering of stellar performances.

But the spotlight mostly belonged to Ohtani, and rightfully so. His mesmerizing blend of power and speed, pitching acumen and ever-present enthusiasm are unique and riveting to behold.

From start to finish, the 2021 season represented Ohtani’s full complement of skills.