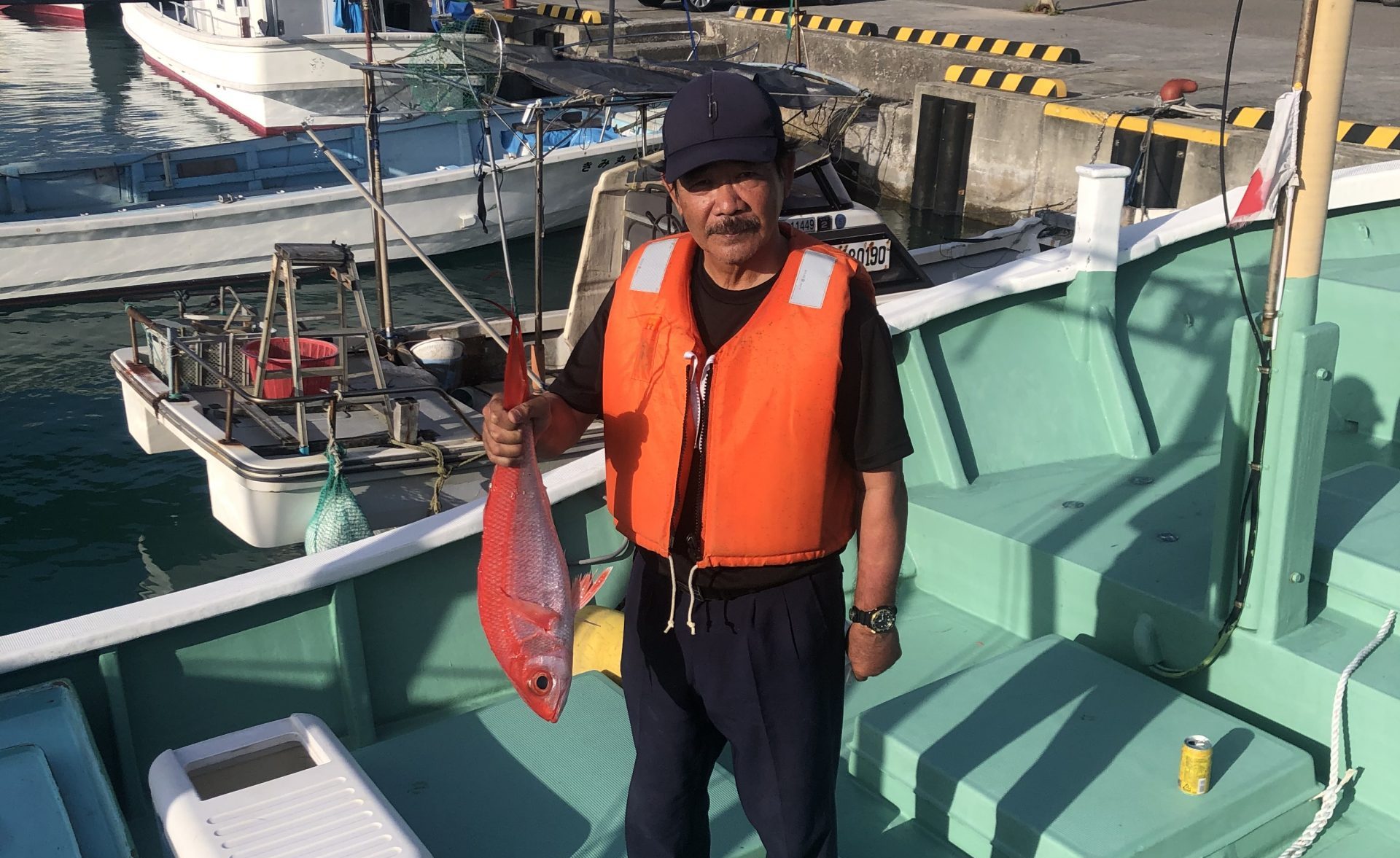 Okinawa fisherman Hitoshi Nakama, who plies the waters around Ishigaki City's Senkaku Islands for his livelihood, on his boat, "Tsurumaru."

The 71-year-old man is a member of the Ishigaki City Council in the prefecture of Okinawa, a position he has held for seven consecutive terms since he was first elected in 1994.

Mr. Nakama’s trusty boat, the Tsurumaru, carries him and a helper or two from Ishigaki out onto the Pacific Ocean, where they drop lines into the water, looking for the seafood that graces tables in Japan. (“Tsuru” means “crane,” the long-necked bird, in Japanese, and is also a play on the word for “to fish”).

The work is fraught with peril. The Tsurumaru’s deck is kept tidy, but Mr. Nakama stands at the stern and baits big hooks as the boat inches ahead — a challenge even for a veteran. The potential for injury is ever-present.

And then there are the violent storms that rise up on the horizon, tossing the tiny Tsurumaru to and fro. Reading the skies and currents, keeping an eye on the radar and an ear open for warnings on the marine-band radio are essential to staying one step ahead of the weather.

When the sky darkens and the waves stir in anger, the crew is reminded that the Tsurumaru is their only lifeline. “Every time I go out, something or other on the boat breaks down,” Mr. Nakama remarked on his Twitter page on August 17, 2021. Keeping the Tsurumaru in oceangoing condition is a full-time job in itself. If the engine fails while the Tsurumaru is bobbing on water that can be several miles deep, storm-driven Pacific swells could easily swallow her and her skeleton crew down to the bottom.


A New Kind of Danger

Hitoshi Nakama has been a fisherman for 27 years, facing down ocean and marine life while navigating local politics on the side. Now, arguably, is the most dangerous time of all.

When Mr. Nakama leaves port and heads for his usual fishing grounds — the Senkaku Islands (part of Ishigaki City, Okinawa Prefecture) — he is often shadowed, not by sharks, but by another kind of predator: the Chinese Coast Guard.

In a YouTube video, which Mr. Nakama posted in February of 2021, Chinese Coast Guard vessels can be seen prowling around the Senkakus and shadowing Mr. Nakama as he fishes in Japanese waters. The Chinese ships harass Mr. Nakama as he works, stalking him deep into Japanese territory — nine nautical miles on the day the footage was filmed.

“These can’t be thought of as Japanese-controlled waters anymore,” a voice from the Tsurumaru crew exclaims.

In a telephone interview with JAPAN Forward, Mr. Nakama explained what was clearly visible in his YouTube videos. “The Chinese ships are armed,” he told me. “The patrol vessels have cannons mounted on the decks.”

Mr. Nakama referred to the October 2020 amendments to the Chinese National Defense Law, which reorganized the so-called Chinese Coast Guard into, essentially, a flotilla under the control of the People’s Liberation Army. But one doesn’t need to be a legal specialist to see what is happening. In Mr. Nakama’s videos, Chinese vessels are plainly trying to intimidate Japanese fishermen like himself from fishing in Japanese waters.

Nearly every day, month after month, the Chinese have been sending ships to the Senkakus. The onslaught is relentless.

It appears that Japan is growing increasingly alarmed by the Chinese incursions into Japanese waters, and is taking steps to counter Chinese aggression. For example, Japan has been conducting sea trials of a new, Reimei-class patrol vessel named the Asazuki. This large Japan Coast Guard ship is believed to be destined for patrols around the Senkakus to meet the Chinese threat.

And as JAPAN Forward and The Sankei Shimbun reported in June 2021, a new project by former defense minister Fumio Kyuma and the Congressional National Security Research Group would soon begin broadcasting footage of the situation around the Senkakus.

At the local level, too, Japan is rising to meet the challenge of the new realities in the western Pacific. In August, Ishigaki City revealed new stone signposts for each of the Senkaku Islands. Ishigaki City is now awaiting permission from the central government in Tokyo to place the signposts on the respective islands.

This effort to reinforce the fact that the Senkakus are an indelible part of Japan parallels a change in 2020 to the Senkaku Islands official address, reflecting the islands’ historical incorporation into Japan.

In an interview with the Sankei Shimbun in August 2021, however, Mr. Nakama lamented Tokyo’s slow response: “If the Japanese government had taken appropriate measures [when the trouble first started], we would not be in the situation we find ourselves in today.”

China remains defiant. In February 2021, another new Chinese law, passed by the 13th National People’s Congress of the People’s Republic of China (PRC), permitted the Chinese Coast Guard to use armed force when patrolling what China has unilaterally deemed to be its jurisdictional waters.

These “jurisdictional waters” are far from clearly defined. China has ongoing jurisdictional disputes with many of its neighboring countries, including Indonesia, Taiwan (a nation-state which Beijing baselessly claims in its entirety), the Philippines, Malaysia, and Vietnam. China has been building artificial islands as well, destroying local ecosystems and encroaching deep into the territory of its neighbors.

China has so far been unable to convince international governing bodies that its claims on other countries’ territory are legitimate. For example, in 2016 the PRC lost a case brought before the Permanent Court of Arbitration by the Philippines over the imaginary “nine-dash line” which China claims grants it sovereignty over roughly half of the South China Sea.

It would appear that China — which rejected the Permanent Court of Arbitration’s ruling in favor of the Philippines — has abandoned the pretense of compliance with international law and is attempting to create its own “rule of law” in Asia by sheer bluster and glare. Under the new raft of Chinese laws, the Chinese Coast Guard would be allowed to use force to settle jurisdictional disputes.


A Livelihood at Risk

Governments and pundits often speak of the Senkakus in strategic terms, as part of a much bigger geopolitical great game afoot alongside the rise of Communist China.

But for Mr. Nakama, defending the Senkakus is also about protecting the livelihood of Japanese fishermen. In an interview with Okinawa-based journalist Masako Ganaha, Mr. Nakama described his plan to trademark Senkaku fish to help defend Japanese fishermen’s jobs. Mr. Nakama’s plight speaks for countless other fishermen in Japan whose lives, and families, depend on ongoing access to the sea.

As China’s quasi-military incursions into Japanese waters have become more frequent, sustained, and brazen, Chinese fishermen have been looting Japan’s fishing grounds in droves. The Sankei Shimbun notes that Japanese fishermen are increasingly avoiding the Senkakus due to the Chinese threat, while Chinese fishing boats have been appearing around the Senkakus more and more often.

Mr. Nakama hit on a plan to broadcast live from the Tsurumaru to show the world what is really going on around the Senkakus. He launched a crowdfunding campaign in April of 2021 and quickly received more than ￥32 million JPY (nearly $300,000 USD) to help purchase the equipment he needs to set up the broadcasts.

“I want to develop this so that everyone gets involved in defending the Senkakus,” Mr. Nakama told JAPAN Forward.

Mr. Nakama has landed on the Senkakus 16 times, and fished in their vicinity for nearly three decades. The islands are not just territory to him, they’re part of his hometown, a familiar destination as he carries on the ancient Japanese tradition of earning a living from the sea.

My last telephone interview with Mr. Nakama was short. “I’ve got to go,” he told me. “I’m headed back out to the Senkakus tomorrow and I have to get ready.”

Hitoshi Nakama is still fishing. For now. He knows the Chinese will be there pointing their guns at him. But he still gets on the good ship Tsurumaru and sets a course for the Senkakus.