Just three days after the city council of San Francisco in California, the United States, allowed a statue depicting South Korean war comfort women be displayed at a park, Mayor Hirofumi Yoshimura of Osaka, Japan, made clear what his city wanted from its sister city. 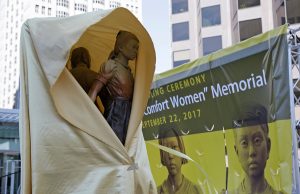 “If the city of San Francisco accepts the donated comfort women statue, then the sister city agreement will be dissolved,” he said in a press conference on September 25.

The figure in San Francisco is unlike the model of a single girl that South Korean organizations have erected in other countries. This one features three women holding hands and forming a circle, with their backs to each other. It bears an inscription approved by the city council, clearly calling the comfort women “sex slaves”—in contrast with how the Japanese government would characterize them.

Osaka Mayor Yoshimura wrote this open letter on September 29 to make the city’s position on the issue clear:

City and County of San Francisco

On behalf of the citizens of Osaka, I would like to express my sincere gratitude for your continued support towards the sister city exchanges between our cities. It is unfortunate that you will not be able to come, but I look forward to giving a heartfelt welcome to the San Francisco delegation visiting Osaka in October.

Referring back to previously sent letters dated February 1st and March 29th, 2017, allow me to reiterate that there is disagreement among historians regarding historical facts such as the number of “comfort women,” the degree to which the former Japanese Army was involved, and the extent of the wartime harm. I am gravely concerned that by regarding uncertain and one-sided claims as historical facts and inscribing them onto the plaque would not be squarely facing the past, but rather a criticism of Japan.

Although the Comfort Women Memorial and plaque is currently established on private property, I have been informed that there are plans for it to become a public property. This should be a historic year to commemorate the 60th anniversary of our sister city affiliation. I am deeply worried that an action of this kind will not only lead to a disruption in the communities of your city, but it could also negatively affect the sister city exchanges as well.

For the steadfast sister city relations that have prospered over many years, I earnestly wish that it will continue even further. However, if the Comfort Women Memorial and plaque were to be located upon public property as an expression of the will of the City and County of San Francisco, not only would it be extremely regrettable, but the City of Osaka must then rethink the sister city relationship.

In August of last year, I was able to meet with you in person, and with the foundation of the friendship we have created, I can honestly convey to you about these concerns that I bear. Hoping for our cities’ bright future, I once again strongly urge you to treat this issue with careful consideration in order to prevent the Comfort Women Memorial and plaque from being situated on public property.

Just as my previous letter, please accept this in the form of an open letter to widely reach the citizens of both cities so that they can understand my views.

Comfort Woman Statues: A War Against the US, Not Japan