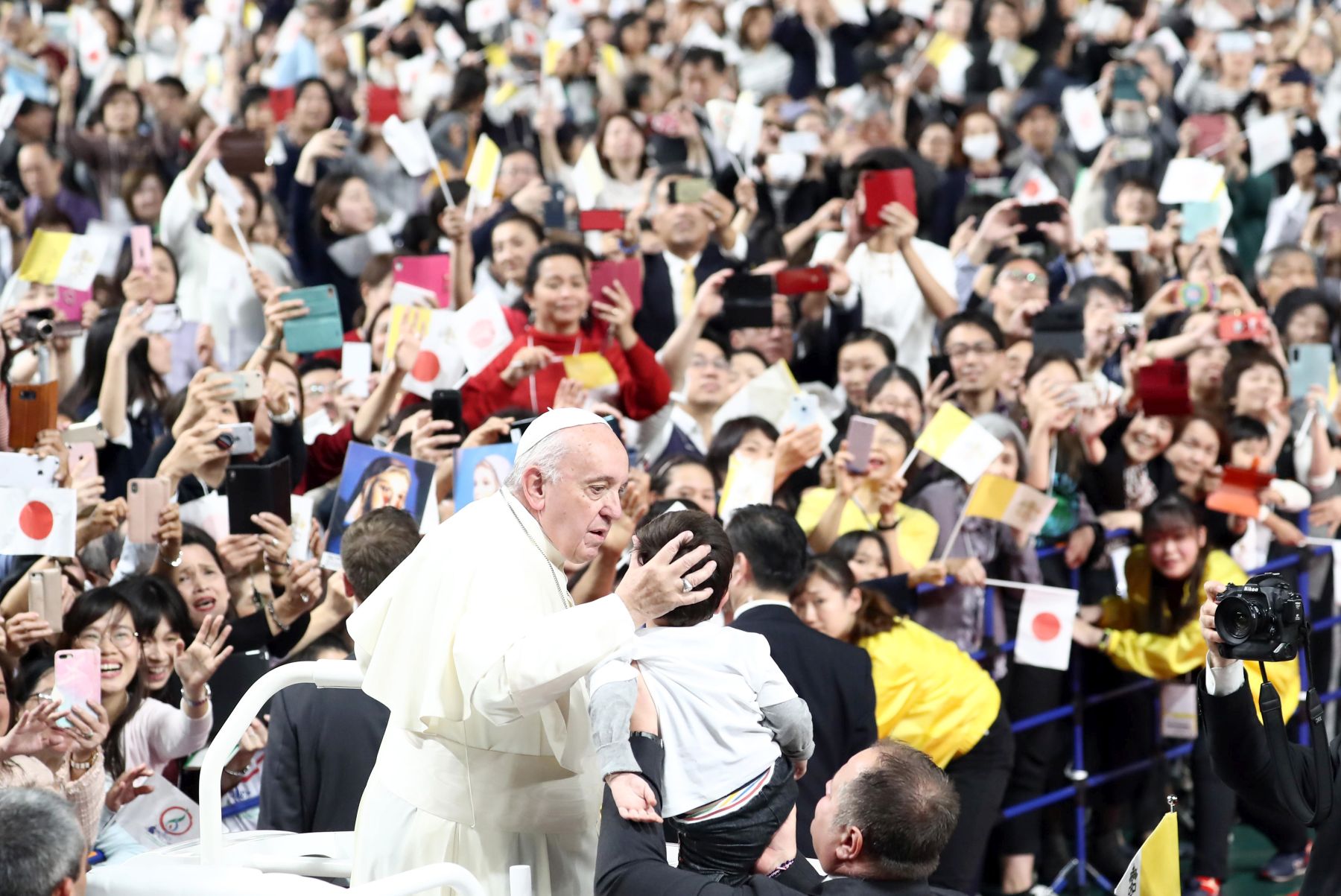 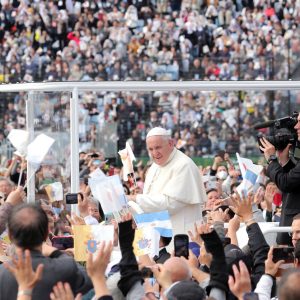 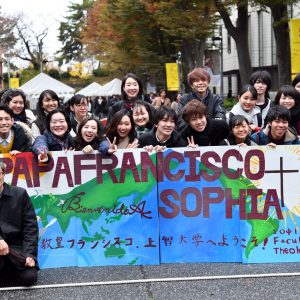 When Pope Francis administered Mass to an adoring crowd at Tokyo Dome on November 25, the diversity of the congregation present was remarkable. Many people interviewed by national broadcaster NHK were of different nationalities.

The Mass itself was multilingual, reflecting the changing times. It compared starkly to the Mass which took place in 1981 under Pope John Paul II.

Earlier in the day the 82-year-old pontiff had talked with 900 young people between 18 and 35 years old, listening to their problems, such as bullying and discrimination. One young man who spoke out was Leonardo Cachuela, who moved from the Philippines to Japan when he was in elementary school.

Both these episodes brought home the questions: How truly diverse is the Catholic community in Japan? And what curiosities can we draw from them, in view of Pope’s Francis recent visit?

Asian Catholic communities are very rich in their witness, holiness, and history: Philippines, Vietnam, Korea, Taiwan, Macao, Hong Kong, China, Borneo, etc. In spite of the difference of mentalities, languages, races, we belong to the unique and the same mystical body of Jesus Christ, believing the same faith.

Ordinary Catholics in Tokyo give you a sense that there have been changes in the community, and not just in terms of its increasing diversity.

Neil Day, an Irishman active in the Catholic community in Tokyo, made an interesting point about the social fabric of the church in Japan is keeping up with the times. Technology and social networks in particular are helping make small communities aware of the greater Catholic network, he said:

Having local and national awareness events both online and physical can be ways to engage more and more people in sharing the joy of the Gospel and evangelization.

A Closer Look at the Numbers

Reportage on the Pope’s visit often pointed out how less than 1% of the Japanese are Catholic. Professor Kevin Doak, interim chair of the Department of East Languages and Cultures of the Jesuit institution, Georgetown University in Washington, DC, begged to differ. He told us:

Many of us who have studied Japanese Catholicism for a long time believe the real number of Catholics in Japan is much larger than 0.5% of the population. Maybe even as high as 10%.

When asked why the official numbers are so different, he quoted several reasons, some practical like conservative bureaucratic estimates.

Despite the undercount, it seems that at the same time there has been a decline in recent years in the catholic community. This has been caused by pervasive world trends, like how rising affluence has negatively affected religious earnestness. Other reasons were deeper and cultural, such as the change in liturgy and practice of the faith in Japan, which has changed people’s perception of the religion.

Dr. Doak argued, for example, that the Mass performed in Japanese and not in Latin has lead people to think of Catholicism as less transcendent. As he put it, why try to join a foreign religion which is trying to be Japanese? One might as well become shintoist. He elaborated:

The Church in Japan actually grew during the 1920s and 1950s when the liturgy was the old traditional Latin Mass. It has declined since these new, informal “Japanese” rituals were introduced in the last several decades.

To summarize, the published numbers alone might be deceptive. To put it in perspective, Dr. Doak compared Japan’s experience with the United Kingdom, where Catholics also suffered heavy persecution in the 1600s:

Most of us, if we know about the Catholic Community in Japan at all, might have heard of them from the popular novel Silence by Shusaku Endo.

The story became all the more famous after Martin Scorcese made a film based on it, bringing to the big screen the story of Kakure Christians, referring to Christians who were forced to go underground when the authorities banned Catholic practices.

It became clear when the persecution finally ended in 1873, that about 50,000 Catholics had survived the long, underground period as Kakure.

But there is a twist, as Professor Doak explained. Only about half of that number reunited with the Catholic Church in Japan:

The remainder set up their own practices and claimed to be following a unique syncretic blend of Catholicism and Japanese traditional religion. They were accurately known as “Hanare” (separated or schismatics), since there was no longer any reason to be “Hidden.”

However, Professor Doak was clear that, these days, Kakure shouldn’t be considered a current pervasive phenomenon:

As they exist today, they should be considered as a form of Protestant Christianity, if not a form of religious syncretism. There really are not many of them left, and they are not of much relevance to an effort to understand Catholicism in Japan today.

But does it make any sense to compare Catholicism in such diverse countries as those found in Asia? China has its history with Communism. In South Korea, the Catholic community has ties with Nationalism, and so on.

Professor Jayeel Serrano Cornelio, director of the Development Studies Program at the Ateneo de Manila University, and an expert on Christianity and Society, pointed out that the Catholic population in Asia is still only 11% of the 1.3 billion believers worldwide.

He said the Holy See might be aware of the rising trend in Asia, where the biggest Catholic communities are in Southeast Asia, in Vietnam, the Philippines, Timor, and Leste. He explained:

It is a significant minority in many ways. Around Asia, Catholics have organized themselves around important issues, such as conflict, democracy, and human rights. Also, one of the strengths of the Catholic Church is that it has strong parishes in local communities, most of the time formed by people who belong to the same ethnicity (cf India, Indonesia). The Pope's visit to Asia is then an encouraging moment for minorities who struggle for recognition.

His comments help put the numbers in perspective. For example, the Catholic community in Africa is the only one that is growing, apart from the one in Asia. Professor Cornelio added:

I think it is very clear by now that Pope Francis is the Pope of the Global South. The appointments he has made in the curia are an indication of this. The frequent visits to Asia are another example. The Pope recognizes that the Catholic Church is vibrant in this part of the world and there is so much that it could do to improve people's lives, by being with them in times of conflict, disaster, and other catastrophes.

This Papal visit provided a good opportunity to shed light on a Catholic community far removed from the Vatican in Rome. As Japan resident Neil Day articulately summarized:

I would hope [the Papal visit] will open the eyes of people throughout the world to the rich and inspiring history of Christianity in Japan, highlighting the fact that Christianity in Japan has a surprisingly large number of martyrs and saints, despite one of the most brutal persecutions ever…. The visit can be a door to inspire the Christian world, which is facing so much persecution, and for the Church which has been the center of so many scandals in recent times.

Welcome, Your Holiness, We Share Your Values in Japan

Pope’s Visit to Japan: Unstated Hopes for the Church in Asia