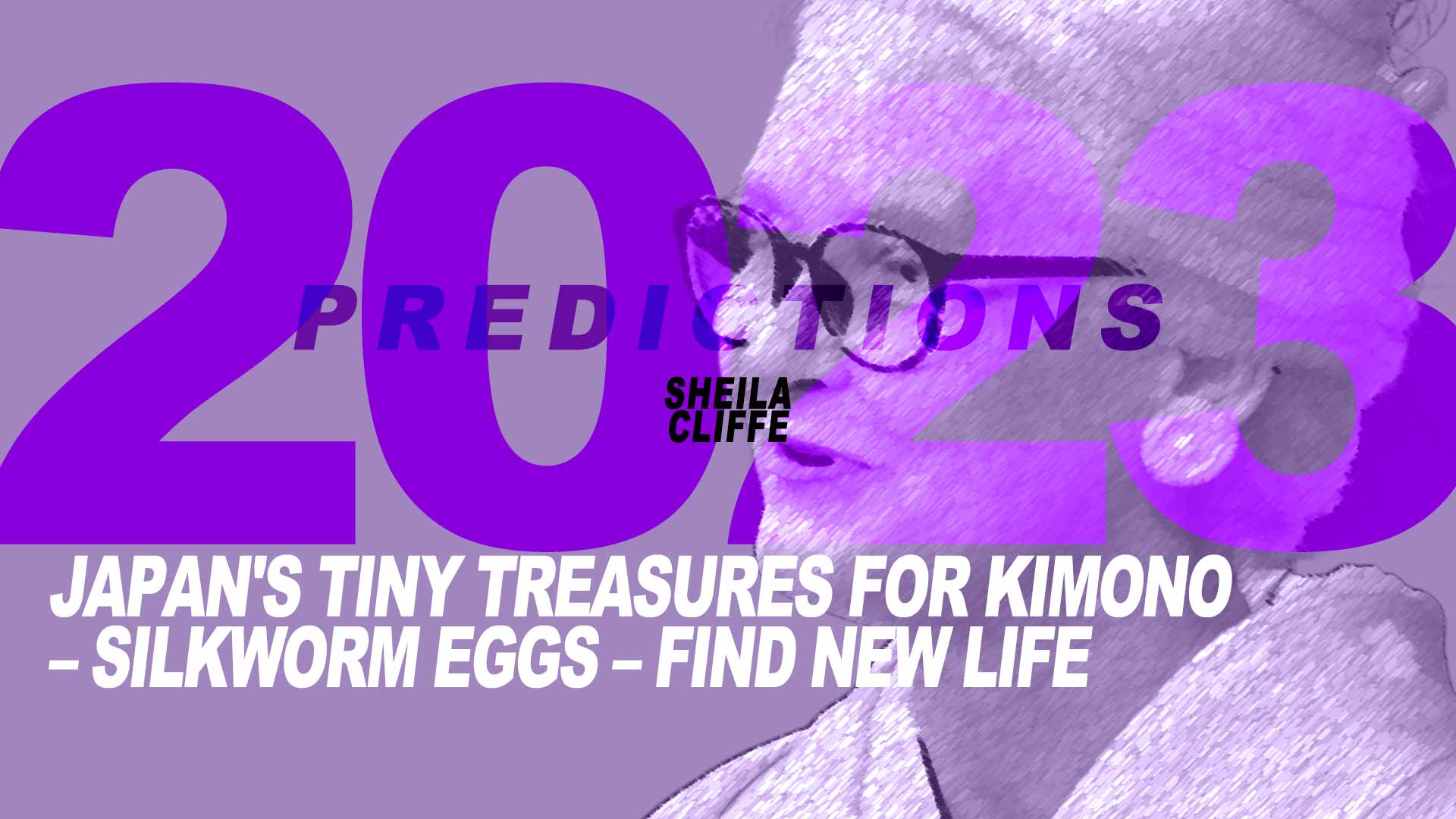 Eggs are perhaps a good topic when we are in the coldest part of the winter, and hoping that spring will be just around the corner. This set of predictions is indirectly related to kimono because of the importance of silk to Japan. Not only for making kimono, but silk is also the main export product that funded Japan's industrial revolution from the Meiji period.

The Tomioka Silk Mill, the first modernized, large scale silk reeling mill in Japan, opened in Tomioka town in 1872. Today it is a UNESCO World Heritage Site and becoming well known. But there are other important related sites that are less well known yet have interesting stories.

Both towns are on the south side of the Tone river which leads to Tokyo. From there, the river was the safest and most convenient way to transport goods to Edo and Yokohama.

Secrets of the Houses of Shimamura

Shimamura was and still is an agricultural area. It is marked by a rather unique architectural feature on the old farm houses. They have long roofs that have a kind of long low lid on the top, which usually has open windows all along it. Such houses can be seen in the surrounding areas too, leading to the Akagi mountain region.

At the end of the Edo period the Tajima family in Shimamura were heavily involved in the production of silkworm eggs. This was a serious business and Yahei Tajima (1822-1898) was so intently focused on this venture that he published books on the best way to produce good quality eggs.

Seiryo iku, "Clean and Cool Nurturing," was a significant contribution to the knowledge of how to farm silkworms. And so was its sequel. Tajima made the discovery that silkworms have a better survival rate if they have good ventilation. And so Tajima Yahei's house, built in 1863, had a special roof with a lid, called koshi-yane, put on it.

Mulberry trees grew well in the surrounding areas, and farmers fed the silk worms on the leaves and farmed them in their attics. His house became the prototype. Meanwhile, surrounding silkworm farmers followed suit.

Teaching an Empress About Silkworms

In 1871 Eiichi Shibusawa, whose family were involved in silk farming, was informed by the Empress Shoken, wife of the Emperor Meiji, that she would like to raise silk to help promote the industry that was so important to Japan. As Shibusawa was so busy he asked Buhei Tajima, from another branch of the same Tajima family, to organize it for the Empress.

Buhei organized to send four women to Tokyo, to teach and help the Empress raise silkworms. Yahei Tajimai's daughter, Sono, had married into the Iijima family in Fukaya.

There are only two honjin left standing in Saitama, the other one being in Okegawa. Sono traveled from Fukaya, leaving behind her 3-year-old daughter. With her, three other women went from Shimamura, two of whom were Tajima family members.

They traveled with a guard and guide to Tokyo and stayed for 6 weeks to teach the Empress Shoken and her ladies how to care for the worms. At the end of the assignment they visited a famous restaurant, Yaozen. It was for elite guests, and a treat before their return journey.

We were told the story by Noriko Iijima, the great granddaughter of Sono. She showed us the diary that Sono had written of her stay with the Empress.

Three of the women had written diaries about their stay. Yahei Tajima thought education was important and had opened a juku or seminar. Sono had attended it in her youth, so she knew how to write well. The tradition that was started then continues to this day.

During the second half of the 19th century, pebrine disease, which is caused by silkworms eating parasitic fly eggs on mulberry leaves, was destroying the silk industry in Europe. By 1865 the industry was ruined. In fact, it did not recover until Louis Pasteur found a solution.

As a result, there was a great demand for quality eggs to grow silkworms. They were used to produce silk threads for fashionable dresses, underwear, and even stockings.

The export of silkworm eggs from Japan began around 1859, but was not officially recognized until 1864.

The residents of Shimamura realized that single farmers did not have a lot of control over what happened to their products after they left the village. Moreover, there were over 100 families involved in the production who were actually competing with each other. So Tajima started the Shimamura Group company.

This company handled its own quality control. The Shimamura Group became known as a reliable company in an age when quality control was difficult. For example, it is known that some unscrupulous individuals sold sesame seeds as silk eggs as the business was so lucrative.

In 1869 the business peaked with one sheet of eggs being sold for enough to feed someone rice for a whole year.

In the late 19th century, the eggs from Shimamura went mainly to Italy. Some, however, were also sold to buyers in other European countries.

During that time, Yahei Tajima went to Brescia near Milan to meet Pompeo Mazzocchi. The latter was an Italian trader who made numerous trips to Japan to buy the eggs. Brescia was known for its silk production and silk was an important part of the Brescia economy.

Tajima left Yokohama on November 28, 1880. The journey took him 40 days. When he arrived, he learned about European techniques, and especially about the use of microscopes for checking silkworm health.

Not only that, he became a Christian and built a church in Shimamura.

On the same November 28 date ー but in 2001 ー Yahei Tajima's descendant Yataro also went to Brescia. His purpose was to meet with the descendants of the Mazzocchi family for a symposium and exhibition of silk costumes.

It is truly amazing that these tiny eggs could have such a huge influence on the economy and modernization of Japan. They were truly treasures created by the dedicated research of the farmers in Gunma prefecture. And as we pay attention to natural products and SDGs, I predict their significance will find renewed attention in 2023.