Princess Ayako of Takamado to Marry at Meiji Shrine in October 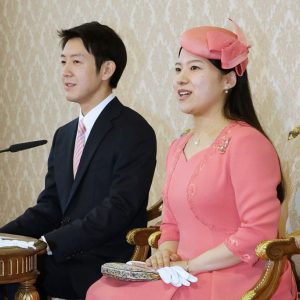 The engagement of Princess Ayako of Takamado to Kei Moriya, a 32-year-old commoner working for the major Japanese shipping firm Nippon Yusen K.K (NYK Line), was formally announced on Monday, July 2, by the Imperial Household Agency.

Their wedding ceremony is scheduled for October 29 at Tokyo’s Meiji Jingu Shrine, according to the agency.

Princess Ayako is the second princess of the imperial family to become engaged in the last two years. Her engagement follows that of Princess Mako, 26, the first daughter of Prince Akishino and Princess Kiko. Prince Akishino is Crown Prince Naruhito’s younger brother.

Princess Ayako first met Mr. Moriya through an introduction by her mother, Princess Hisako, in December 2017. She has associated with her future husband since then, the agency said.

The 27-year-old princess is the third and youngest daughter of Prince Takamado, who passed away in 2002, and Princess Hisako.

She entered Josai International University in Togane, Chiba Prefecture, in 2009 after graduating from Gakushuin Girls’ Junior & Senior High School. The princess completed a master’s degree in social work at Josai University in 2016 and is currently working as a research fellow at the university’s Faculty of Social Work Studies.

Under the Imperial House Law, marriages of female members of the imperial family do not require approval by the Imperial Council. Their engagements become official in a traditional court ceremony called “Nosai no Gi” (the ceremony of exchanging betrothal gifts).

Subsequently, there will take place a string of other imperial ceremonies before their official wedding in October. These include the ceremony to report the marriage to the “Three Shrines in the Imperial Court”—Kashikodoro, Korei-den and Shinden in the Imperial Palace—where the souls of successive emperors and other imperial members are enshrined, as well as the gods of heaven and earth.

In 2014, Princess Noriko, the second daughter of Prince Takamado and Princess Hisako, married Kunimaro Senge, the eldest son of the chief priest of Izumo Taisha, a major Shinto shrine in Shimane Prefecture, and relinquished her royal status.

The marriage of Princess Ayako scheduled for October and the relinquishment of her imperial status will certainly accelerate the shrinkage of the royal line. With the April 30, 2019, abdication of the Emperor drawing near, imperial family members’ participation in public duties and activities is stretching thin. Which public activities should be supported and how to share the burden among remaining imperial family members has become an increasingly weighty concern.

The planned marriages of Princess Ayako and Princess Mako and their departure from the royalty will reduce the number of imperial family members to 17: four males, 12 females, and the Emperor.

Princess Ayako is now the honorary president of two organizations, positions handed over from her mother, Princess Hisako. She also attends functions of groups relating to social welfare for the disabled, one of her areas of interest.

Princess Ayako must now decide whether to continue the honorary positions after her marriage, a process that will happen “through consultations with the organizations,” according to the Imperial Household Agency.

Prince Akishino, who will become the imperial heir after the Emperor’s abdication and his brother’s ascension to the throne, said in November 2017 during a news conference on his birthday that he had “no idea about who should take over” his current public duties when his position changes.

He added, “It will be appropriate to have the scope and tasks [of public duties] assigned in an adequate way to each” of the royal family members.

A senior official of the agency noted, “Given the shrinking number of Imperial family members, there is a need for fundamentally reviewing what is desirable among royal family members’ duties as a whole.”

Referring to the issue of the shrinking royal line, Chief Cabinet Secretary Yoshihide Suga, pointed out in a June 26 news conference, “It is an important task that must be addressed without delay.”

The chief government spokesman, however, stopped short of addressing the advisability of legislation to allow a princess married to a commoner to “retain her royal status and create her own branch of the imperial family,” as called for in a resolution attached to the special law passed in 2017 for allowing the Emperor to abdicate.

Suga only added warily, “The matter should be dealt with through sufficient analyses, deliberations, and a process of careful procedures.”