Pullout from Afghanistan Gives the U.S. a Free Hand to Rebalance to Asia 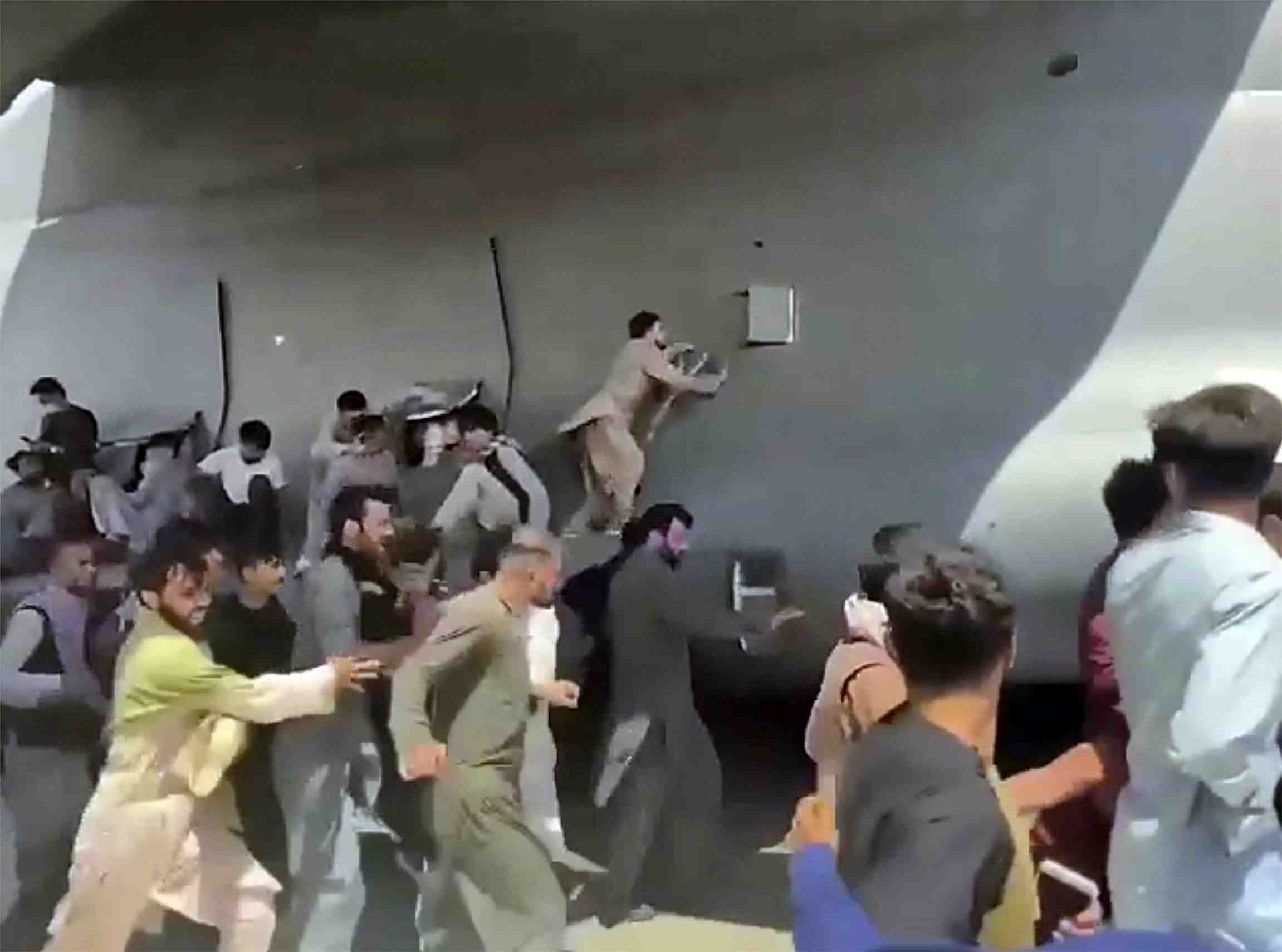 Monday, Aug.16. 2021. Thousands of Afghans have rushed onto the tarmac at the airport, some so desperate to escape the Taliban capture of their country that they held onto the American military jet as it took off and plunged to death. (Verified UGC via AP)

Nothing could have been more humiliating to Americans than the scene of that giant United States Air Force transport aircraft taking off from the Kabul international airport in Afghanistan. The pain and frustration have quickly turned into fury at the decision by the Biden administration to press on with the evacuation.

China’s foreign ministry held a press conference, where it sought to pour salt on the American wounds. Drawing from headlines in the U.S. media, Beijing called it a new “Saigon moment.” The previous day, the official Xinhua News Agency had tweeted “HISTORY REPEATS ITSELF” along with photos from the fall of Saigon during the Vietnam War.

The goal of this Chinese propaganda was to ridicule the U.S. withdrawal from Kabul as a “harbinger of the future fate awaiting Taiwan,” suggesting the United States would surely similarly abandon Taipei.

Nonetheless, those Chinese strategists who view the situation more realistically may have been looking in a very different direction. Even as the Islamic fundamentalist Taliban forces were grabbing power in Kabul, a force of 25,000 U.S. Marines, along with the U.S. Navy, was carrying out a military training exercise in East Asia, based on a scenario for retaking islands in the western Pacific.

Besides the U.S. troops, contingents from Japan, the United Kingdom, and Australia participated in this exercise. According to one U.S. newspaper, this was the largest such joint military exercise since the end of the Cold War. Commenting on the shift to dealing with China, the paper noted, “It (the military exercise) demonstrated just how much the attention of the U.S. military has shifted since the war in Afghanistan started 20 years ago.”

In other words, the United States’ chaotic decision to withdraw from Afghanistan was part of a shift in strategic priorities from the Middle East to the Indo-Pacific region.

To understand how the postwar global order has become so shaken up, we need to look back two decades to the September 11, 2001, terror attacks that touched the central nerve of the U.S. system. The world changed overnight when two hijacked aircraft were flown into the World Trade Center buildings in Manhattan. The administration of then-President George W. Bush was forced to direct its energies into a “War on Terror” in the Middle East.

Reportedly in the fall of 2001, the Chinese embassy in Pakistan, a neighbor of Afghanistan, invited resident military attachés from nations other than Japan and the United States to sound out their views on what direction the U.S. military was likely to take. Specifically, they were interested in issues from the long-term perspective, namely:(1) how long the U.S. military would stay in Afghanistan; (2) how many casualties it would suffer; and (3) how much U.S. national power would be depleted in the process.

Chinese strategists calculated that if the U.S. became bogged down in a long war in Afghanistan, that would work to Beijing’s advantage. After all, invasions by Great Britain in the 19th century and the Soviet Union in the 20th century had ended in defeat, earning Afghanistan the nickname “graveyard of empires.” In particular, in light of how the Soviet invasion of Afghanistan had triggered the demise of the Soviet Communist Party, an extended stay in Afghanistan for the U.S. military hardly seemed a wise policy.

Prior to its involvement in the asymmetrical war in Afghanistan, the Bush administration had designated China as a “strategic competitor” of the United States, as it had the former Soviet Union, and would do “whatever it takes” to defend Taiwan.

By that time, China had already moved to exploit the post-Vietnam War power vacuum to advance into the South China Sea and rob the Philippines of Mischief Reef.

However, 9/11 caused thinking in the Bush administration to undergo a sea change. It subsequently shifted the focus of its attack from Afghanistan to Iraq, a development that even China had not anticipated.

It should be noted that Chinese President Jiang Zemin took advantage of this and, in November 2011, declared to the 16th Chinese Communist Party Congress that, “the 20-year period until 2020 offers us a strategic opportunity.” As a result, during that period when U.S. forces were preoccupied in areas outside the Indo-Pacific, China steadily pushed forward with its military expansion.

The Biden administration’s plan for withdrawal from Afghanistan was clearly linked to the 20th anniversary of the 9/11 attacks. However, it also marks 10 years since the Barack Obama administration announced its “Asia-Pacific Rebalance” policy to counter China.

In his 2011 speech to the Australia Parliament, President Obama vowed to withdraw from Iraq and Afghanistan and instead build up the U.S. presence in Asia. Nevertheless, the U.S. found that it could not so easily get out of Afghanistan and the Middle East. As former U.S. Undersecretary of Defense Michele Flournoy recently lamented, “Washington did not deliver on its promised ‘pivot’ to Asia.”

Finally, under the Trump administration, Washington shifted back from the War on Terror to “great power competition” with China. But that was only after the struggle with terror had cost many lives and trillions of US dollars.

P. Michael McKinley, a U.S. career foreign service diplomat who served as ambassador to Afghanistan (2015-2016) and senior advisor to Secretary of State Mike Pompeo (2018-2019), says the failure of the two-decade War on Terror resulted from miscalculations by successive administrations and Afghan leaders’ failure to govern on behalf of their nation’s people.

A December 2020 Department of Defense report to Congress noted that, although the Afghan government claimed it had 300,000 men under arms, it was not known how many of these were “ghost soldiers” meant to inflate the numbers.

In an article appearing in Foreign Affairs, McKinley writes that he is pessimistic that even were the United States to postpone its withdrawal for years, it would only cost more lives of U.S. servicemen and diplomats, as well as tens of billions of dollars in war expenditures per year.

In the immediate wake of the collapse of the Afghan defense forces, President Biden told a news conference, “American troops cannot and should not be fighting a war and dying in a war that Afghan forces are not willing to fight for themselves.”

As a result, he was subjected to withering criticism for “fleeing his responsibility.” However, the simple fact remains that foreign forces cannot save a country that lacks the will to defend itself.

The starting point for the U.S. involvement in Afghanistan was the mission of eliminating the al-Qaeda terrorists who had gained sanctuary there. Biden said that al-Qaeda was gone from Afghanistan and the threat of terrorist attacks had been reduced. The failure came in attempting nation building in Afghanistan, which had not been the objective of the intervention in the first place.

However, it cannot be denied that the Trump administration and the Biden administration both negotiated with the Taliban by clearly indicating when the withdrawal would take place, which ended up being nothing more than an “agreement” in name only. In the end, it is power that determines everything.

If the United States is to restore any loss of prestige resulting from the withdrawal, the only way it can recover is by taking concrete steps toward its “return to Asia.” It must focus its diplomatic and military assets on the “Asian front” in order to strategically deter China.

As always, China was quick to exploit a power vacuum, with Foreign Minister Wang Yi inviting one of the cofounders of the Taliban to Tianjin for talks to explore the potential benefits Beijing could enjoy from cooperation with the Taliban.

China has been thrown off balance by the Biden administration’s determination to return to Asia, while remaining wary of the historical ties between the Taliban and Uyghur militants (China’s Xinjiang region), and it feels compelled to act.

Will China be the next world power to venture into the “graveyard of empires”?

What Beijing most detests is the thought of a successful containment strategy against it by the United States and its allies and regional partners. The U.S. withdrawal from Afghanistan at long last has given President Biden a free hand to carry out a rebalance to Asia.


(Find access to The Sankei Shimbun column in Japanese at this link.)