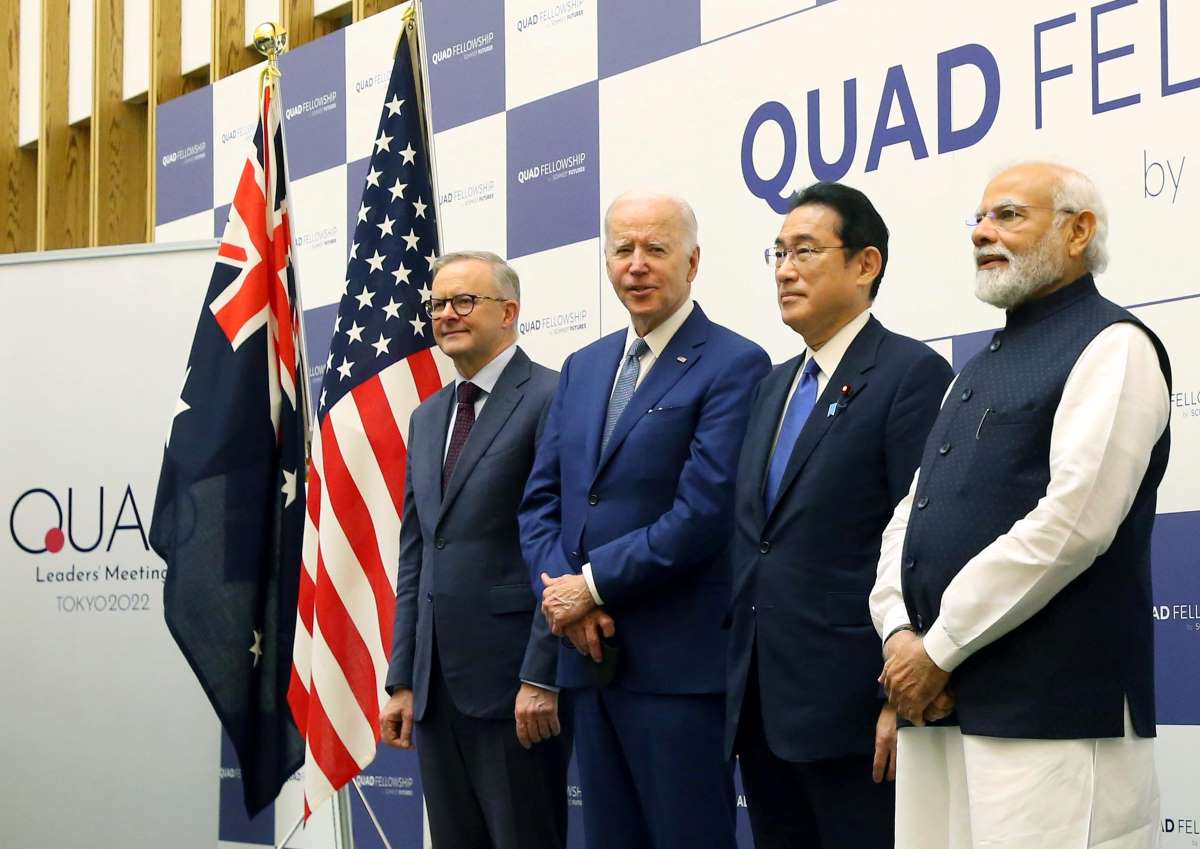 Family photo of the Quad leaders, from left: PM of Australia Anthony Albanese, US President Joe Biden, PM of Japan Fumio Kishida and PM of India Narendra Modi. At the Prime Minister's Office (Japan) on May 24, 2022 (Photo by Yasuhiro Yajima).

On May 24, the leaders of Japan, Australia, the United States and India met in Tokyo for the Quadrilateral Security Dialogue, or Quad.

This is the second in-person leaders meeting, following the summit in Washington DC in September 2021. In addition, two online leaders meetings have taken place since 2019.

The frequency the leaders have met in recent years underscores the leaders' resolve in showing their stand on the Indo-Pacific, in an implicit will to fight back the influence of China.

The four leaders agreed on protecting the international rule of law and condemning “unilateral use of violence in any territory”, including a surprisingly strong (if nonspecific) statement against violence, the likes of which are seen in the war in Ukraine.

Collaboration in various sectors was also agreed upon, including in the health and energy security, space information and climate change sectors.

Their meeting comes just a day after US President Joe Biden unveiled the Indo-Pacific Economic Framework (IPEF) in Tokyo on May 23. The new framework is set to include 13 countries: the Quad members, along with New Zealand, Cambodia, Vietnam and Indonesia, among others. Together, these countries account for approximately 40 percent of the world's GDP.

Commenting on the IPEF’s importance in an afternoon press conference, Japanese Prime Minister Fumio Kishida stressed the significance of having the participation of both the United States and India, something which wasn’t true for either economy-related agreements such as the Trans-Pacific Partnership (TPP).

It was telling that all four leaders were there at all. US President Biden had been facing a tough period domestically, and Antony Albanese had traveled to Japan directly after winning the election to become Prime Minister of Australia on May 22.

Albanese's attendance so soon after the election campaign even garnered a joke in Joe Biden's opening remarks when he said, "If you fall asleep, I will understand."

Albanese for his part, in his first international assignment since taking office, took the opportunity to say that "Australia has just changed government, but its commitment to the Quad has not changed, and will not change.

“Our cooperation is built on the values that we share: a commitment to representative democracy, the rule of law, and the right to live in peace,” Albanese emphasized.

Notably, the Australian leader in his opening remarks pushed an environmental agenda, pledging the country’s aim to obtain 43 percent carbon neutrality by 2030 and to reach carbon zero by 2050.

Unified in the Indo-Pacific

“On issues including the war in Ukraine, we agreed on the importance of protecting the rule of law and the integrity of a country's territory, as well as condemning the unilateral use of force in any territory, including the Indo-Pacific,” said the leader of the host country.

The statement by the four countries in particular included the pledge to maintain “freedom of navigation and overflight, to meet challenges to the maritime rules-based order, including in the East and South China Seas.”

This is a message directly to China, which has been conducting regular incursions into foreign waters, alarming Japan and other countries.

In response to North Korea’s frequent launch of nuclear intercontinental ballistic missiles (ICBMs), the countries also agreed on “commitment to the complete denuclearization of the Korean Peninsula.” Other regions of Asia also garnered their attention, as the leaders expressed their serious concern about the situation in Myanmar.

The joint statement identifies areas of collaboration, including $500  million USD in infrastructure to be spent over the next five years. COVID-19 vaccines, cybersecurity, space information sharing, and climate change were addressed, the latter seeing the launch of the  “Quad Climate Change Adaptation and Mitigation Package (Q-CHAMP).

In the sector of maritime defense, there was a discussion about the Indo-Pacific Partnership for Maritime Domain Awareness (IPMDA), which has been designed to facilitate the coordination and response of regional partners to humanitarian and natural disasters, and combat illegal fishing.

Other areas for attention by all four countries include health, technology, and the announcement of the Quad fellowship. The fellowship, a new concept, would bring 100 students from Quad countries to the United States to pursue graduate degrees in Science, Technology, Engineering and Mathematics (STEM) subjects.

Commenting on the discussions among four leaders in the press conference, Kishida said: “We have managed to send a strong message from Tokyo to the world by the fact that now, more than ever, a free and open Indo-Pacific is important to the leaders of all four countries. And I think it has a renewed importance.”

The US, Japan and Australia all mentioned Russia’s war in Ukraine in their opening remarks to the summit, as a way of expressing the urgent need for Indo-Pacific ties.

“We are navigating a dark hour in our shared history,” said Biden in his opening remarks, calling Russia’s war “brutal, unprovoked”, triggering “a humanitarian catastrophe.”

Australia’s prime minister echoed the same worries in a veiled reference as he said: “As the Indo-Pacific is reshaped, the Quad is needed now more than ever to meet the challenges and threats of a less certain world.

Yet, as much as Kishida stressed the important words of unity, there was an elephant in the room in the sense that the joint statement contained no clear condemnation of Russia’s invasion of Ukraine.

India has decades of economic and military ties with Russia. It’s estimated that about 50 percent of military aid to India comes from Russia.

India was also the only of the four countries in the Quad to abstain from the United Nations General Assembly resolution on March 3,  which condemned Russia’s invasion of Ukraine.

And in fact, Prime Minister Modi didn’t mention Ukraine at all in his opening remarks. Instead, he stressed the importance of a free and open Indo-Pacific as a “force for good.”

That ambivalence carried over into the leaders’ joint statement with regards to China, Russia’s ally and an important Indian economic partner. China is never mentioned explicitly in the joint statement, with the exception of the wording,“East and South China Seas.”

Kishida brushed over the differences in opinion among countries, however, remarking in the press conference:

“Among these four countries, of course there are slight differences in the positions of each country. Even with those differences we reached an agreement on certain points. And we managed to send a message from Tokyo to the world, and I think that has an important meaning.”

The leaders agreed to have their next in person meeting in Australia in 2023, where they have pledged to continue discussions to achieve a free and open Indo-Pacific.