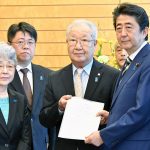 Japanese Prime Minister Shinzo Abe has repeatedly said that he would meet with Kim one-on-one to resolve the issue.

International relations involving the abduction issue thus moved fast this past year. While it is regrettable that no specific development has been made to rescue the abductees, North Korea has been cornered to the extent that there exists some hunger deaths under tough international sanctions, and domestic discontent with the Kim regime among cadres and people.

Supported by Prime Minister Abe and National Security Adviser John Bolton, who accurately understand that any dictatorship does not make a concession unless it is pressured, President Trump — while saying that he likes Kim — has continued to enhance economic sanctions on North Korea. Moreover, he has threatened to take a physical action unless Kim decides to dismantle nuclear missiles.

Since September 2018, the Kim regime has found that the U.S. would not ease sanctions. Instead of cooperating, he has reiterated political propaganda urging people to overcome the current economic crisis with self-help and self-sufficiency efforts. This is according to North Korean internal documents given by North Korean defector and human rights activist Kim Seong Min. Min spoke at an international seminar organized jointly by the Association of the Families of Victims Kidnapped by North Korea and its private and parliamentary supporting groups.

The human rights activist quoted a North Korean citizen as telling an informant in the North: “Under Kim Il Sung, Kim Jong Il, and Kim Jong Un, they have touted self-help and self-sufficiency for more than half a century. Any more self-sufficiency efforts would mean that we would have to enter forests again, strip the bark off pine trees, and dig up weeds, and eat them.”

The Only Chance for All Abductees to Return to Japan

The Trump administration has imposed not only direct sanctions on North Korea but also secondary sanctions to exclude foreign financial institutions dealing with North Korea from the dollar settlement network. This effectively prevents China and South Korea from supporting North Korea.

Therefore, we can take advantage of time. As time passes, the Kim regime will be plagued with serious social unrest or massive starvation. The regime will have no choice but to decide to dismantle nuclear missiles and obtain massive aid worth as much as ¥ 1 trillion (about $ 9 billion) from Japan.

To receive such Japanese aid, Pyongyang will have to resolve the abduction problem. It is destined to do so.

Like his father Kim Jong Il, Kim Jong Un could issue a fake report that the abductees have died. In a bid to resolve the problem with such a report, the United Front Department of the Workers’ Party of Korea blatantly cooperated in 2018 with a Japanese group seeking such resolution.

We are reaching a crucial stage in which Japan-North Korea relations finally move forward with the progress of the U.S.-North Korea nuclear negotiations. This will be the only chance to win the younger Kim’s decision to return all of the Japanese abductees back home.

(A version of this article was first published by the Japan Institute for National Fundamentals, Speaking Out #563, on December 17, 2018.)