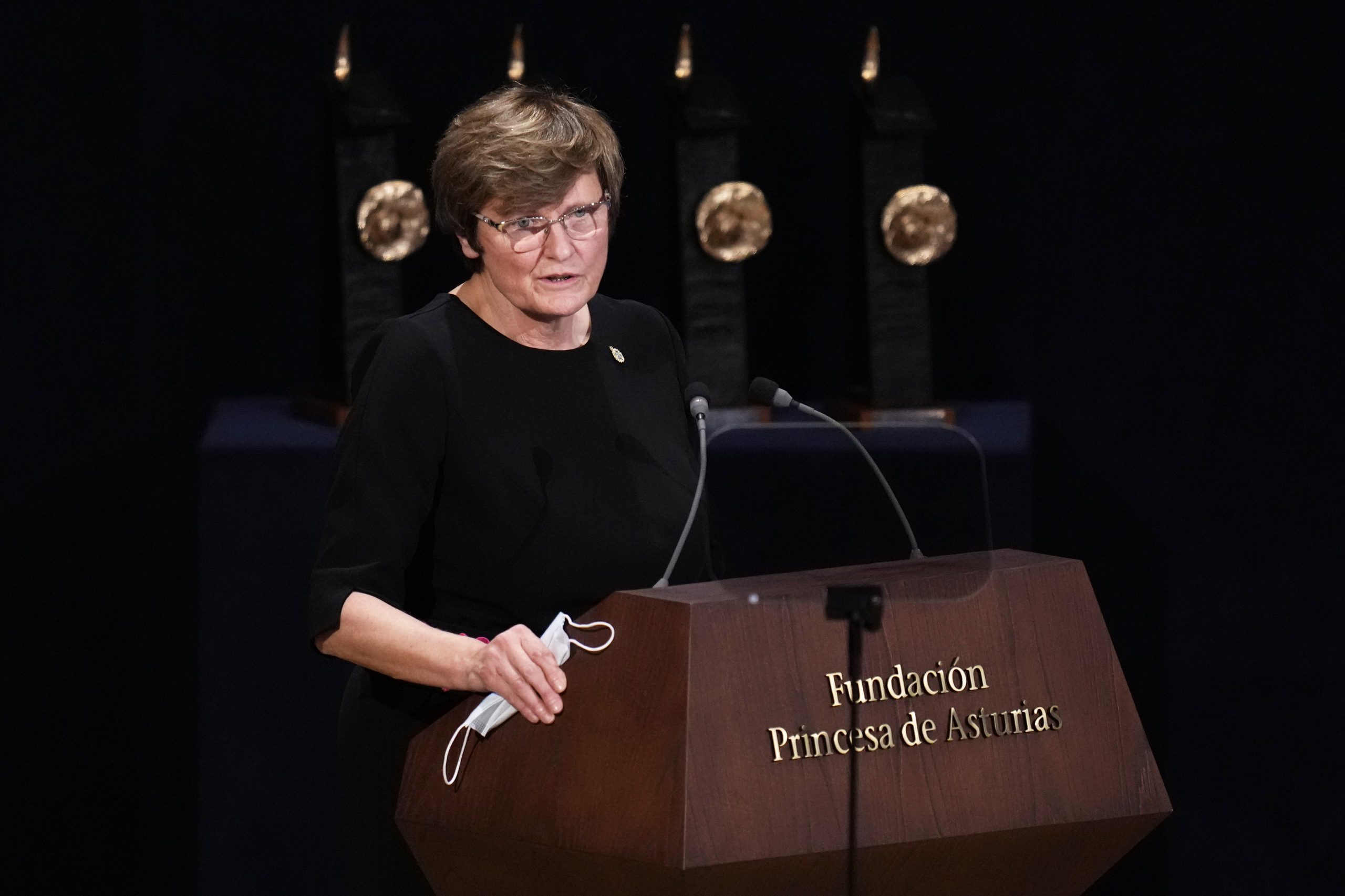 Katalin Kariko speaks after receiving, together with six other scientists, the Princess of Asturias Award for Technical and Scientific Research 2021 from Spain's Princess of Asturias Leonor, at a ceremony in Oviedo, northern Spain, Friday October 22, 2021. (AP Photo/Manu Fernandez)

Second in a series

“No one called me when I published the paper, but I believed messenger RNA (mRNA) would be an excellent medical treatment.”

These were the words of Katalin Kariko, a specially-appointed professor at the University of Pennsylvania, on April 15 in Tokyo. She was attending a press conference of the winners of the Japan Prize, which is given to scientists who have made significant contributions to society.

Kariko was the creator of the mRNA vaccine, which was first put into use during the COVID-19 pandemic and quickly became the global vaccine of choice.

The vaccine is made of mRNA that contains the genetic information that the virus uses to spread, and it creates those viral proteins inside the body. By doing this, antibodies are induced and immunity is built.

Compared to other forms of vaccines, it is easier to artificially synthesize and is possible to mass-produce in a short period of time. It has also shown that it has an effect on reducing symptoms as well.

In other words, both companies can be considered as part of the technologically proficient “Generation Z.” Dr. Kariko is also a senior vice president at BioNTech.

Research into using mRNA vaccines to treat cancer and heart failure has also been progressing rapidly. The technology is revolutionizing the world of medicine, and Dr. Kariko is a strong candidate for the Nobel Prize.

In center stage are the Generation Z pharmaceutical companies.

Artificially-created mRNA can cause the immune system to produce severe inflammatory effects when they enter the body, which has long been a barrier to clinical use. Kariko and others discovered that minor modifications to the structure could avoid those attacks from the immune system, and published the findings in a paper in 2005. However, little attention was paid to it at the beginning.

The situation changed after the 2010s. The technique of enclosing mRNA in lipid capsules and transporting it to cells was established, and the efficiency significantly improved.

Moderna and BioNTech accelerated their research and development efforts, and the driving force was the support provided by government funding. The underlying principle has been the sense of crisis that “countermeasures against pandemics is providing security itself to the country.”


Science with an Ethical Sense of Duty

Developing vaccines against infectious diseases is said to be unprofitable. Even after large investments, once the disease stops spreading the demand disappears. There is also a risk of not making a profit. For this reason, in addition to the effort of private companies, the support of the government is crucial.

Moderna alone, which grew with the support of the US Department of Defense and others, received $100 million USD (about ￥13 billion JPY) of funding from the United States government between 2013 and 2016. In contrast, the budget allocated by the Japan Agency for Medical Research and Development (AMED) for the entire “Emerging and Re-Emerging Infectious Disease Management Project” for the period of 5 years from 2015 is only ￥4.1 billion to ￥6.6 billion JPY ($30 million to $48 million USD) per year.

“This isn’t a pursuit of profit. We have developed mRNA vaccines driven by an ethical sense of duty,” says Dr. Kariko.

In the mid-2010s, Japan was in fact also developing its own mRNA vaccine. It was a public project that Dr Ken Ishii (currently a professor at the Institute of Medical Science, University of Tokyo), who was then at a national research institute, worked on along with Daiichi Sankyo. Dr Ishii was also a referee for Dr. Kariko’s 2005 paper.

“At the time, Moderna and BioNTech were accumulating large amounts of funding and drawing the most outstanding researchers with high salaries. In comparison, vaccines were considered an ‘old business’ in Japan, and the climate wasn’t conducive to innovation,” he said.

However, the country began to act in 2015, when Dr Ishii made the case for the importance of vaccines in response to the epidemic of Middle East Respiratory Syndrome (MERS) in South Korea.

However, when a budget of ￥400 million JPY ($3 million USD) was requested to cover the costs of preparing for clinical trials, it was reduced to ￥10 million JPY ($73,000 USD). “MERS has settled down, how about you ask private companies?” those in charge answered curtly.

“Daring to invest in new technologies, this courage and bravery has disappeared in Japan,” Dr. Ishii said with frustration.

COVID-19 spread rapidly after the first person was infected in Wuhan Province, China, in December of 2019, and the world has been caught up in a pandemic.

The United States launched “Operation Warp Speed,” and invested about $10 billion USD (about ￥1.3 trillion JPY) into vaccine development. Moderna and other companies received this funding.

The company and BioNtech-Pfizer took advantage of the research accumulated during pre-pandemic times to obtain emergency approval for the vaccine just one year after the outbreak.

In Japan, too, Daiichi Sankyo began developing an mRA vaccine, and completed the plans at the same time as other groups overseas. However, the know-how to actually connect this to a practical application was lacking, and there wasn’t a foundation for putting it out into society.

Ultimately, Japan had to rely on foreign-made vaccines to protect citizens.

“The COVID-19 pandemic caused a paradigm shift of a level that only occurs once every hundred years. Developing systems to train and secure human capital is an urgent task,” said Daiichi Sankyo’s Tooru Tanzawa, the director of the vaccine planning department. He added:

“Using the basics of the industry, we must build a solid foundation so that companies, government, and academia can produce something that can be used throughout the world. Now is the time.”

Will it be possible for Japan to regain its place as an innovator in pharmaceuticals? This series explores the challenges and paths forward through the lens of vaccines.

Next: Mistrust of Vaccines and their Development