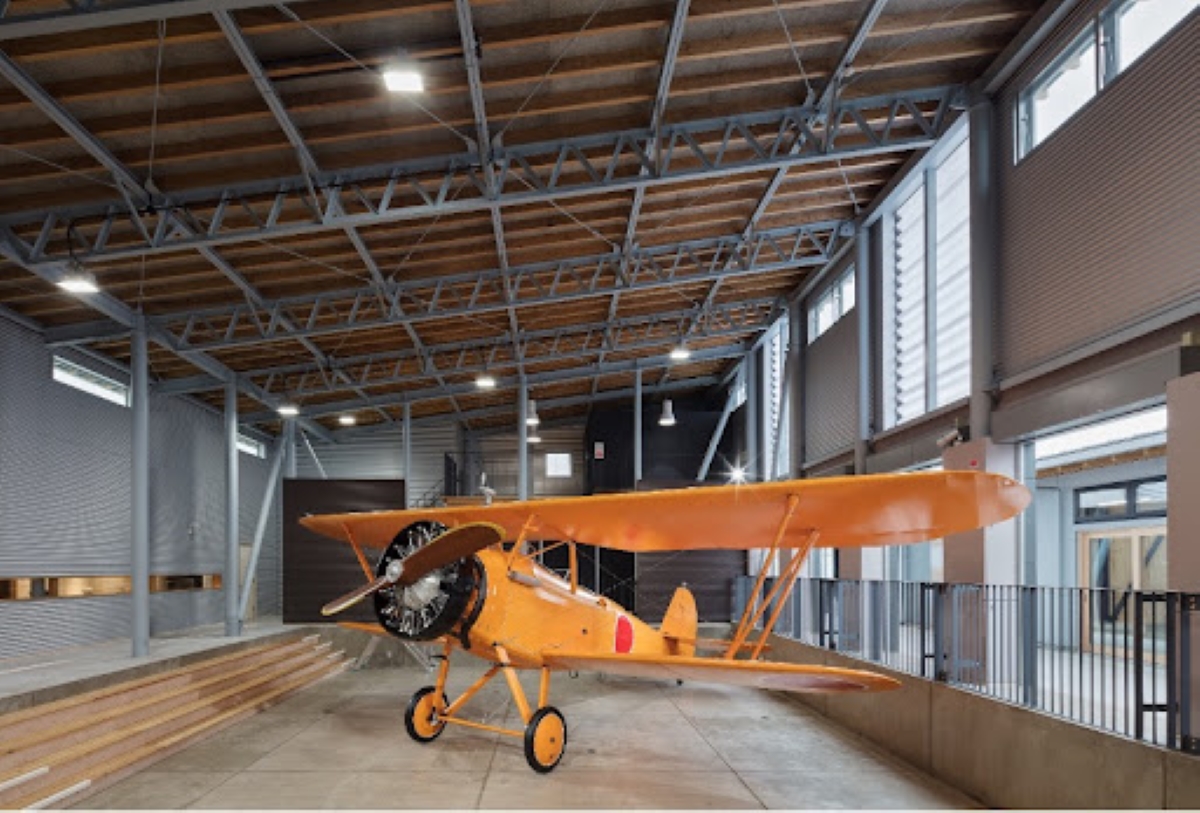 This Japanese war era plane is on exhibit at Himitsu Kichi (Secret Base) Museum. (© Shin'ichi Nakayama)

First part: Save the Asian Monuments: Taking Up the Challenge of Preserving Asia's Material Heritage

Shin'ichi Nakayama and Tony Takahash — partners at the Save the Asian Monuments NGO — were busy surveying Asian historical sites and artifacts. They were also planning out their future activities when the COVID-19 pandemic hit. Takahashi came back to Japan.

It was then, Nakayama tells me, that he and Takahashi decided to make the best of the global travel shutdown and investigate Asian monuments at home.

"My wife passed away in 2018," Nakayama says. "We have no children. I have no one to leave anything to.

"In 2020 I took an early retirement from my teaching position. I mortgaged my house. With my savings and pension I went to every museum in Japan that I could."

Takahashi joined him on many of the trips.

What Nakayama and Takahashi found in Japan was a different kind of peril for material culture than in the Middle East. But it was a peril all the same.

"Japan is well-known for its national treasure (kokuho) and important cultural property (juyo bunkazai) system," Nakayama explains. These government programs recognize, register, and ostensibly provide for the preservation of relics and sites considered central to the history of Japan.

"But the reality is that this system, which exists at various levels from the municipal and prefectural up to the national, is in many ways an in-name-only initiative," Nakayama continues. "Things and places, as well as cultural know-how, get registered. But there is often little done concretely to keep listed items in good shape for future generations."

Nakayama tells me about swordsmiths and sword polishers in Japan. It is not a happy story for many contemporary practitioners of these two cultural arts are virtually synonymous with the archipelago.

"The people who do the work of protecting traditional arts and crafts need to eat," Nakayama says. "But there is often no money in what they do. Lots of people are quitting because they can't find any apprentices (deshi) to take over the trade.

"With no one to teach, the art which a person spent a lifetime learning dies with him or her.

"A friend is a sword polisher," Nakayama continues. "He is having a hard time earning a living. He went to Saudi Arabia to try to sell some of his katana, Japanese swords. It didn't work out.

"Some swordsmiths have committed suicide."

Time is running out. A generation of artisans in Japan is aging with no one to whom to pass along their wisdom and knowledge.

And it isn't only national treasures and important cultural properties that are at risk. Nakayama and Takahashi spent week after week in the car driving from one small Japanese town or village to the next, cataloging the material heritage that is oftentimes virtually unknown to the rest of the world.

What is true for culture is true for the places that house it — museums. In saving the Asian monuments, Nakayama is also working to save the dazzling array of museums in Japan.

"We often hear of the possibility of a massive earthquake and tsunami hitting along the Nankai Trough sometime over the coming decades," Nakayama says.

"If such an event were to occur, then countless museums, temples, shrines, and other cultural sites in Okinawa, on Shikoku and Kyushu, and in southwestern Honshu and beyond would be toppled by violent shaking or swept out to sea by a giant wave.

"The Japanese government is taking measures to move important artifacts to higher ground," Nakayama continues. "But what also needs to be done is to protect the museums across Japan which are in danger of dying out from neglect. There are so many important sites all throughout the archipelago which we must work to keep up.

There are big museums in Japan, history museums, art museums, museums which preserve and showcase Japanese culture. But those places often have the same kinds of exhibitions year in and year out. The same famous paintings and pieces which draw big crowds.

There are many, many other museums here. Small museums which are telling so many other important parts of Japan's, and Asia's, history.

Nakayama tells me about three such museums. I had never heard of any of them. All three, and more, are places bundled with stories and memories, artifacts and historical significance which Nakayama and Takahashi are racing to preserve.

"In Okayama," Nakayama says, his eyes glinting as they do whenever he is speaking about his work, "there's a museum called the Kagamino Kindai Bijutsukan (Kagamino Modern Art Museum). It's the classic small Japanese museum. A man named Takahiro Tsujimoto retired and moved to Okayama from Nara. He opened the museum in an old minkan, a Japanese farmhouse. Mr Tsujimoto runs the museum using his own pension money."

I look up the Kagamino Modern Art Museum and find a cultural treasure nestled in the Okayama hills. There are Taisho and Showa era paintings on display, ceramics, and other treasures. But we've had the pandemic, and a general decline in attendance at small museums across Japan. Nakayama tells me that it is difficult for Mr Tsujimoto to keep the museum open.

I feel a sudden sense of loss imagining what would be lacking were the Kagamino Modern Art Museum to close its doors. I had not known of the museum moments before. But now I agree with Nakayama that it must be protected.

The Nishiki Secret Base Museum, as the location bills itself in English, is an old naval base located, improbably, in the mountains far from the sea. There are guided tours of the underground labyrinth where the former Imperial Japanese Navy prepared for some of the most dangerous and death-defying missions of the war.

Construction of the secret base began in 1943. The base was used right up until Japan's surrender in August of 1945. Many aircraft remained at the base's adjacent landing strip on the surrender date, still waiting to be used in Japan's defense.

The base also produced the pine oil (shokon'yu) which Japanese engineers developed as a substitute for jet fuel in the face of the Allied embargo on petroleum.

It is another fascinating slice of history. Another museum in danger of closing down.

"And then there's the Naoetsu POW camp in Niigata," Nakayama says, naming a third museum he is working to help. "It's the home of Peace Memorial Park now," Nakayama says. "The camp location was difficult to track down after the war, but some former Australian POWs later helped verify the camp site.

Naoetsu tells a new story about POWs. Niigata is a poor prefecture, cold and harsh in the winter. There often isn't enough to eat. Recovering the history of the Naoetsu camp helps show that the Japanese military didn't abuse POWs in Niigata. There simply weren't enough rations available. The conditions were bad for everyone, POW or not.

All three of these museums — in Okayama, Kumamoto, and Niigata — curate irreplaceable pieces of Japanese history and culture. All three, Nakayama says, are struggling just to keep their doors open.

"I recommend all three," Nakayama says. "What I want to tell the people of the world is this: Visit museums! And that includes museums in Japan, of course. Go off the beaten path and discover the richness that Japanese museums have to offer."

Coming next: Save the Asian Monuments: Reopening to the Global Museum World