Situation Report: Looking at Ukraine and its Implications for Japan 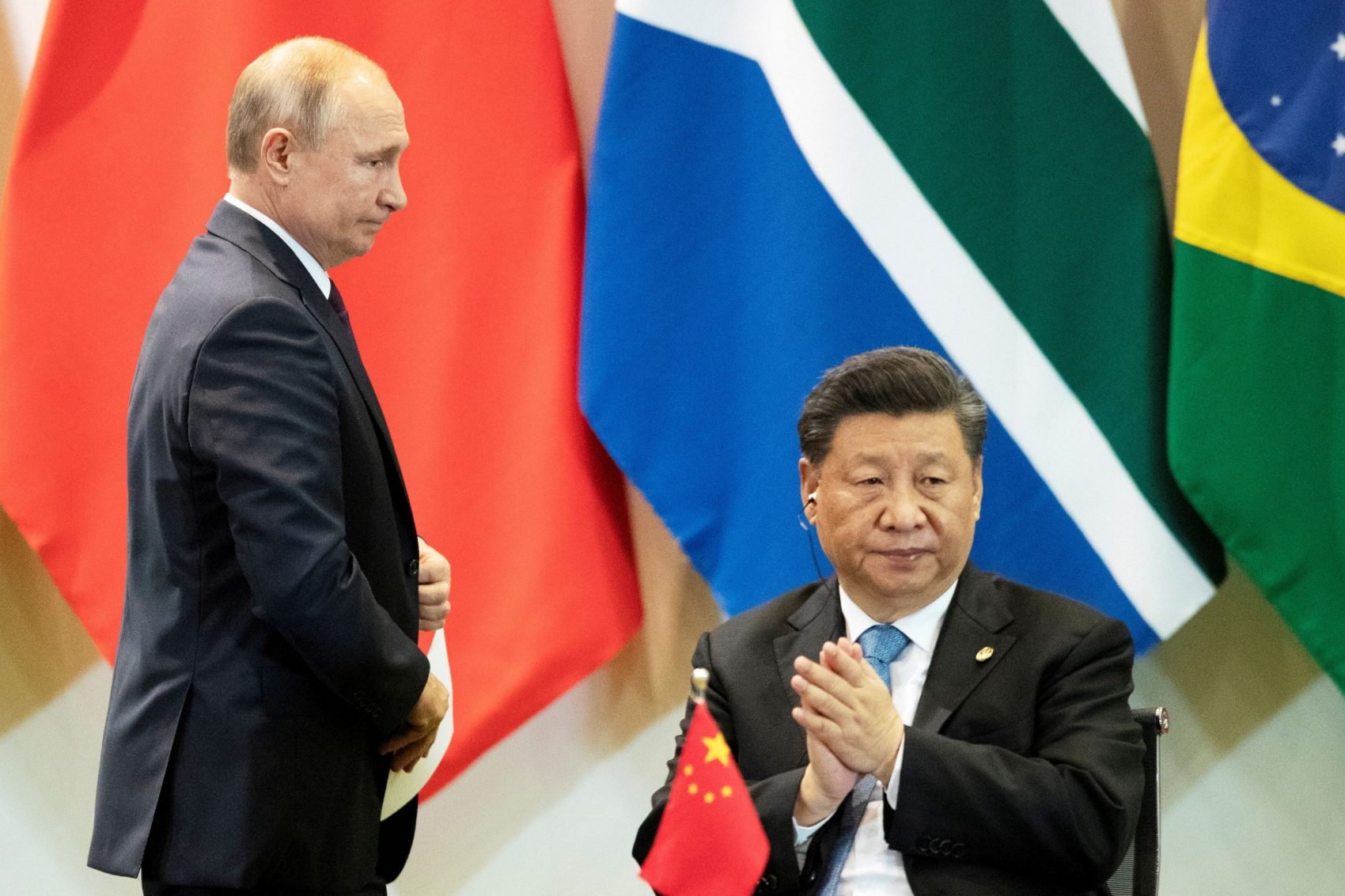 China's President Xi Jinping and Russia's President Vladimir Putin, shown here at a meeting of the New Development Bank during the BRICS emerging economies in Brasilia

Russia is assembling a massive military force, currently reported to be around 130,000 troops, under the pretext of conducting military exercises. These forces are being strategically placed in Belarus, Crimea, and also along the eastern Ukraine border so that it encircles Ukraine from three sides.

As witnessed during Russia’s 2008 invasion of Georgia and 2014 invasion of Crimea – both successes in changing the status quo in favor of Russia – such troop mobilization under the guise of a military exercise has become a modus operandi of Moscow before it launches an invasion. However, unlike previous cases, this time some experts insist that Russian President Vladimir Putin is only bluffing and not seeking to use force.

In other words, they claim that Putin’s display of military might is to gain an upper hand in the ongoing diplomatic negotiations with the United States, as Russia maneuvers to secure significant concessions over Ukraine’s future and the expansion of the North Atlantic Treaty Organization (NATO).


What If They’re Wrong?

But perhaps it would be prudent to consider an alternative possibility, that Putin’s real intentions are to bolster Russia’s national security through the use of force.

The logic behind this course of action is that if Russia can bring Ukraine into its sphere of influence as it did with Belarus, Moscow can extend its buffer zone much further south on its western border, which would help to alleviate its strong sense of insecurity. Moreover, the expansion of Russia would also allow the realization of Putin's ambition to make Russia great again, returning to the glory days of the former Soviet Union.

Both past and present, dictators of powerful nations have always possessed grand aspirations. But as one approaches their 70th birthday, like Putin, establishing a lasting legacy becomes an ever more urgent task.

Furthermore, if Putin’s aim was to merely attain a diplomatic victory through intimidation and coercion, the cost effectiveness of this endeavor becomes increasingly difficult to reconcile as deploying military strength of magnitude incurs a significant financial burden. In essence, if posturing was his primary objective, he could’ve done so with far fewer troops and much less cost.

In addition, the very fact that the statements by Moscow have not only been diplomatic, but also reserved is also worrisome. If Russia had no intent on invading, it’s more likely that their diplomats would have taken a more bellicose and aggressive stance in order to gain a compromise through diplomacy.

This leads to the possibility that Russia is carefully laying the groundwork so that it can justify its military actions once hostilities have commenced.

Putin’s grand strategy may be to present conditions to which the United States could never acquiesce, and then blame the ensuing failure of diplomacy on Washington. The next step then would then be to claim that Russia no longer had any recourse but to use military force in light of the American position.

With the stakes already raised to this height, it is also unlikely that Putin will back down without achieving a significant strategic victory that would boost his prestige. In this way, the possibility that Putin is actually dead serious about invading Ukraine starts to gain traction.

Looking forward, Russia may resort to hybrid warfare which will entail a combination of gray zone military tactics such as cyber attacks and clandestine infiltration with the purpose of creating mayhem and chaos within Ukraine, to “soften” the country. Once the ground freezes and Russian tanks and heavy artillery can move unimpeded, Russia might seize this opportunity to launch a full-scale attack led by insignia-less troops alongside mercenaries, to be followed by Russian regulars.

From Putin’s perspective, sacking Kyiv and installing a pro-Russian government will not only restore Russia's glory, but will lead to a surge in support of his leadership, as fervently nationalistic Russians are intoxicated by victory. Thus, in one stroke, he would have succeeded in establishing a shining legacy as one of Russia’s greatest.

But why did Putin decide to confront the West at this moment? There are several reasons, of which the following are key.

First, the US at present appears extremely vulnerable. It not only is suffering enormously from the pandemic, but is utterly divided over such issues as abortion rights, mask mandates, vaccinations, and even over the understanding of the events that transpired on January 6 of 2021.

Second, Biden is perceived as a meek, weak, and aging president who cannot even corral his own party to pass key legislation.

And third, United States military prowess is no longer to be feared after its humiliating defeat in Afghanistan.

Also, one should not overlook that Biden, in returning to the "Pivot to Asia" policy first pursued by the Obama administration, recognized China as America’s greatest adversary while downplaying the Russian threat.

Surely Putin felt slighted by this, but at the same time it created a splendid opportunity for him as the strategic focus of the United States military gradually shifted to the Indo-Pacific.

With the US military presence in Europe at the lowest levels in decades, and NATO – the nemesis of Russia – becoming increasingly divided and disorganized without a clear raison d`etre, it only makes sense that Putin decided to make a bold move.

If the crisis in Ukraine explodes and Europe becomes drawn into a full-blown conflict, an emboldened China may perceive this as a perfect opportunity to act decisively so that it too can alter the existing status quo in a way that will better reflect its national interests.

This could manifest itself in many forms, but some kind of coercive action toward Taiwan cannot be ruled out. It should be kept in mind that prewar Japan acted much more brazenly after the outbreak of the Second World War in Europe.

As the security of Japan’s southwestern flank is deeply intertwined with the fate of Taiwan, Tokyo would be forced to take some sort of action to counter the Chinese. But with Europe completely absorbed in its own problems, it is unlikely that either the European Union or NATO would have the luxury of providing serious assistance. By the same token, support from the United States, which would be occupied on two fronts, could also be suppressed.

Looking back once again into the history of World War II, the policy that America implemented at the time was one of “Europe first.” In a similar vein, there should be no surprise if Washington chooses to give a higher priority to dealing with Russia than China.

This is why there should be a much greater sense of urgency in Japan to take bold measures that bolster the country's national security, including (but not limited to) possession of a military capability to strike an enemy effectively, alongside a legal framework enabling it to do so.

Despite the recent talk over how the US-Japan alliance will be further strengthened by the promise of greater Japanese financial support, it goes without saying that there is no better way to enhance the alliance than for Japan itself to take the initiative in expanding its defense capabilities.

This will require not only an increasing military expenditure, but also revising Japan’s long-held national security identity from a “security recipient” to one of a “security provider.”

Japan must use the events rapidly unfolding in Europe as a catalyst to once and for all alter its mindset so that it can be fully prepared to defend the nation, first and foremost, in the event of a conflict in which it may very well have to bear the initial brunt.