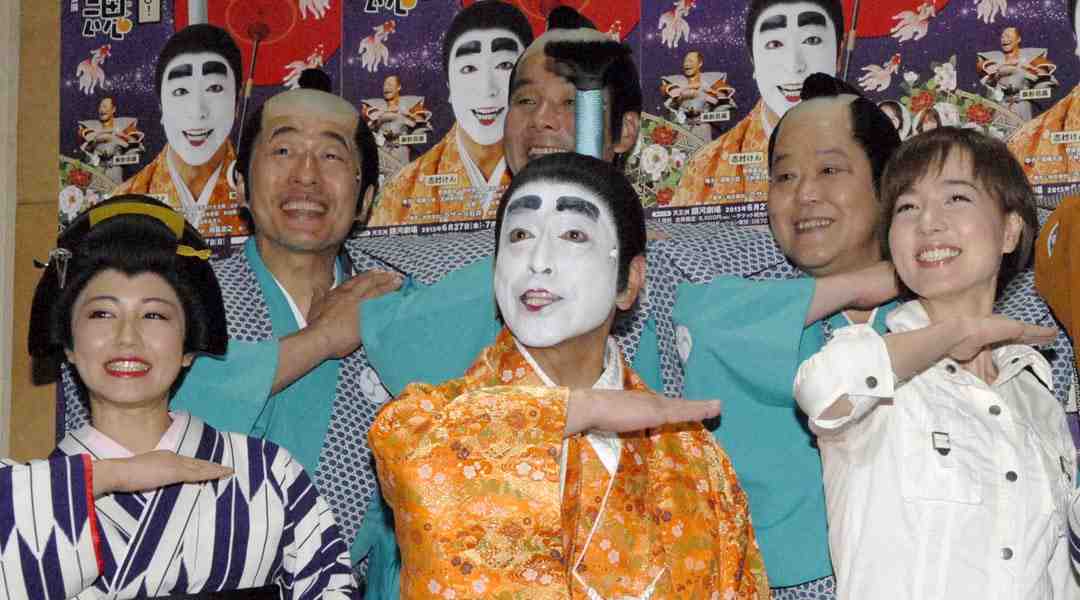 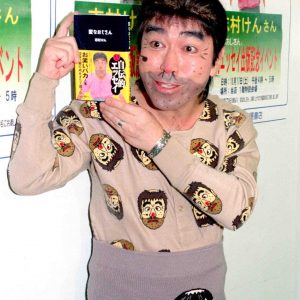 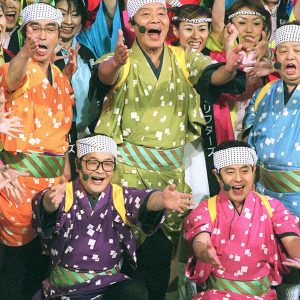 Shimura Ken and his comedy program 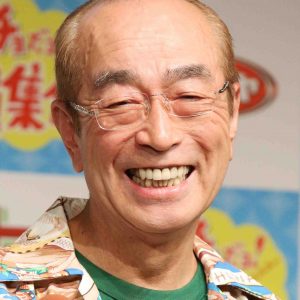 Japan has lost a lot of ground to China these past 20 years. Japan’s roaring economy used to be the world’s second biggest, after her ally, America’s. Now, the Japanese economy is like a kid in a swing that nobody’s pushing. Shallower and shallower the arc, sadder and sadder the kid. The good times have quit rolling and we’ve been in the doldrums for forever. China’s economy overtook Japan’s years ago (helped in large part by the astronomical sums of ODA Japan provided), and Japan has been eating Beijing’s wake ever since.

China sucks up most of the oxygen in the Asian Studies room now, too. When I was an undergrad there were still romantics like myself who wanted to forge a Lafcadio Hearn trail through the maze of Japanese culture. Wabi, sabi, doumo, and douzo. All that is old headband today. The kids these days want Mandarin, served up hot and ready to earn them cash right out of the graduation gate.

Japanese culture? A quaint curiosity again, a bonsai tree on the deck of a Liaoning aircraft carrier. The world has bought into the Chinese caricature, “little Japan” and the “little Japanese people,” busying themselves with arts and crafts while the gunpowder- and paper-inventors next door vie for world domination. If anything, college students nowadays stop over in Narita and have their picture taken with a Hello Kitty geisha girl on the way to Beijing. A nice shot for Instagram, maybe, but nothing to hang a career on.

From currency to cachet, Japan is getting its bento lunch eaten by the Chinese.

Add to the list one more loss. Last week, Shimura Ken died of the Wuhan bug. He was 70 years old.

Most readers have probably never heard of Shimura Ken. If you look him up and find his publicity photo, you likely still won’t have a clue who he is. That’s a shame, because Shimura Ken was one of the funniest people in Japan. I think he was one of the funniest people in the world. He was a comedian who achieved something almost unheard of in the 21st century: he made people laugh with innocence, he opened hearts with joy. He was the Red Skelton of Japan, if those kinds of comparisons will do. And he was the one thing that a communist regime will never be able to duplicate. He brought spontaneous, rippling laughter to a crowd. He made people genuinely smile.

Shimura was most famous in Japan for the character he invented, Bakatono. Indeed, he has achieved the entertainment variety of immortality for this role. The name “Bakatono” is probably impossible to translate into English in a way that retains the inbuilt chuckle of the original, but to render it straight it’s something like “Lord Fool.”

Lord Fool was Shimura’s rendition of the kind of feudal lord, tono-sama, that probably comes to mind if you’ve ever seen James Clavell’s Shogun or any samurai movie ever made. The real feudal lords were serious men, locked in existential struggles with surrounding warlords and always scheming to outflank a rival or undermine a plot. Lord Fool, by contrast, was delightfully baka, foolish. It was in this role that Shimura’s genius shone.

Shimura was a clown of the highest rank, a slapstick talent whom one must put in the same lineup as Charlie Chaplin or another, unsung master of physical comedy, Cary Grant. Lord Fool’s routine was just pure delight.

Face made up in white paint, eyebrows ridiculously greased in, lips puckered in theatrical red, Lord Fool would stride into a room full of retainers and ministers and ladies-in-waiting and proceed, gently, to lampoon every hierarchy in the land. (This is one of the secrets of Japanese comedy, after all: a roiling carnivalesque, a celebration of the kindred nature of the human spirit.) Pratfalls, practical jokes, literally pies in the face and buckets of water over the head — Lord Fool could do anything. He made being silly look so easy. He made stupid gags the highlight of everyone’s workweek. His timing was perfect, his delivery without a hitch.

Do yourself a favor and check out some of Bakatono’s highlight reels. That warmth you feel rising in your heart is the genius of Shimura Ken doing its level best to make you happy, to make you smile. It doesn’t really matter if you understand Japanese or not. It didn’t require any English skills, by the same token, to fall in love with the Little Tramp.

But Shimura could do so much more than send up feudal lords. The variety of his skits is astounding. One of my favorites is when he dresses up as the prototypical high school English teacher — hair awry, suit ill-fitting, tie and vest mismatched — and proceeds to give a lesson in English conversation… to a room full of foreigners. He has each student stand up and practice the sentences in the English textbook until they are able to pronounce English like it’s Japanese. Even the extras start to snicker at the end.

The thing is that the butt of the joke is Shimura. He’s making fun of himself. Think about the heart it takes to open oneself up like that, to invite the world to laugh at one’s follies, one’s imperfections. There isn’t a trace of guile in any of it. It’s a highwire act, but you’d never know it. It’s Shimura, pouring out his comedic gift for the rest of us.

My favorite Shimura show was the one he devoted much of his time to later in his life, Shimura’s Zoo (Shimura Dōbutsuen). The adorable combination of Pan-kun, the overalled chimpanzee, and James, the backpack-carrying bulldog, was the delight of people from infants up to centenarians. There were plenty of other animals, too. Rabbits and sloths, cats and birds, otters and monkeys. Shimura loved them all, and the show helped provide funding for shelters where abandoned critters could be cared for, maybe find a new home.

They killed the funny in China first of all, long, long ago. Dour communists like Jiang Qing organized ultra-serious troupes of bad actors and actresses to put on shrill performances of political plays back in the ’60s and ’70s, when joy had been declared bourgeoisie. There is no laughing in commie-town. There’s nothing to laugh about, first of all, but even if there were, laughing at the wrong thing can get you killed.

No matter how bad things get, there’s laughter in Japan. In fact, the worse things get, the sillier and more intimate people here become. We’re working on our third lost decade, and we’re overshadowed by the gargantuan communist behemoth right across the sea. The world’s attention has moved to China now. I don’t care. I’m staying in Japan. Maybe I’ll be lucky enough to be here when the fifth or sixth lost decade rolls around. There may be mask shortages around the world, but Japan will never run out of holy fools.

There are other comedians here who will pick up Shimura Ken’s motley banner and carry on. You’ll never find his equal in a communist country. You won’t even come close.

Rest in peace, Lord Fool. Thank you for the laughter. We need it now more than ever.