[Speaking Out] Japan Should Support Oppressed Ethnic Minorities in China 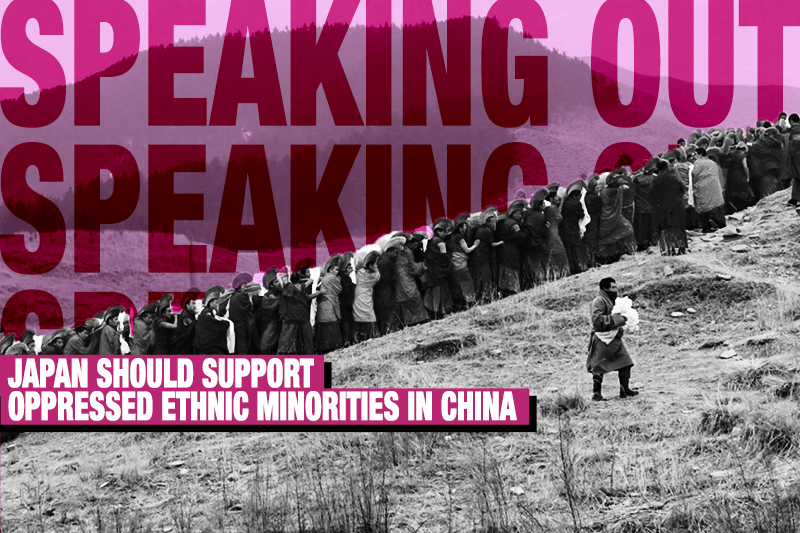 What Japan should seek three-quarters of a century after World War II is to break away from the Yalta systemーa framework for the postwar international order, including the treatment of Japan, based on a secret agreement reached between the United States, the United Kingdom and the Soviet Union at their conference in Yalta on the Crimea Peninsula in February 1945.

The Yalta agreement was a secret pact, and some countries subjected to the system were not represented in the conference. Given that, I would also note that the Yalta system runs counter to international law.

Despite its absence from the Yalta conference, Japan was subjected to the post-war system decided there. It was forced to hand over the four northern islands, which are its inherent territories, to the Soviet Union. This was an unreasonable treatment for a defeated country.

Another country subjected to the Yalta system was Mongolia, which was among the victorious countries. The country is geographically divided by the Gobi Desert into southern and northern parts. Although Mongolia became independent from China’s Qing Dynasty in 1911, early on Northern Mongolia was put into the Russian sphere of influence and Southern Mongolia into the Japanese sphere.

Later, Southern Mongolia became part of Manchukuo and the Mongolia autonomous region (or Mengjiang), and followed the Japanese-type modernization path. Northern Mongolia made nation-building efforts with support from the Soviet Union under the Western model.

The two Mongolias shared the vision of a unified Mongolia and struggled to realize the vision.

An opportunity to do so came in August 1945. Northern Mongolia, or the Mongolian People’s Republic, cooperated with the Soviet Union in penetrating into Southern Mongolia and Manchuria, liberating Mongolians from the Japanese and Chinese rule. A Mongolian government delegation entered Southern Mongolia along with military forces and launched reconstruction efforts, while leading local people.

Then came the revelation of the secret Yalta agreement to divide Mongolians as at present.

Postwar Japan quickly revived itself, becoming an industrial power. Southern Mongolia, for its part, was left as a Chinese colony. It’s people were economically exploited, and its nomadic civilization diminished. Tens of thousands of intellectuals and military officers nurtured under the Japanese rule were cruelly purged for cooperation with Japan.

Seventy five years after its devastating defeat, Japan has now emerged as a Free World leader. Japan should recognize that the time has come, not only to take back the four northern islands lost under the Yalta Agreement, but also to proactively engage with people in its former colonies and sphere of influence.

Colonies should not satisfy themselves with mere independence from their rulers. There are many things to learn through interaction with former colonial masters about how modern nations should be. Taiwan, with which Japan had maintained diplomatic relations over a long time, has become a model nation in Asia. France and Britain have proactively engaged with their former colonies, contributing to the democratization and economic development of those countries.

Mongolians, Tibetans and Uighurs have never seen Japan or Western countries as enemies, but rather pursued their respective goals of self determination and independence from the old empire of China. These goals have not been accomplished yet.

Japan and the world are liable to help these people. It is time for Japan to amend its constitution and contribute to building new international order. It should not miss this opportunity.

(A version of this article was first published by the Japan Institute for National Fundamentals, Speaking Out #709 (Special Contribution) on August 11, 2020.)

Yang Haiying, also known as Akira Ohno, is an author and a professor at Shizuoka University. He is from Southern Mongolia and a naturalized Japanese citizen.