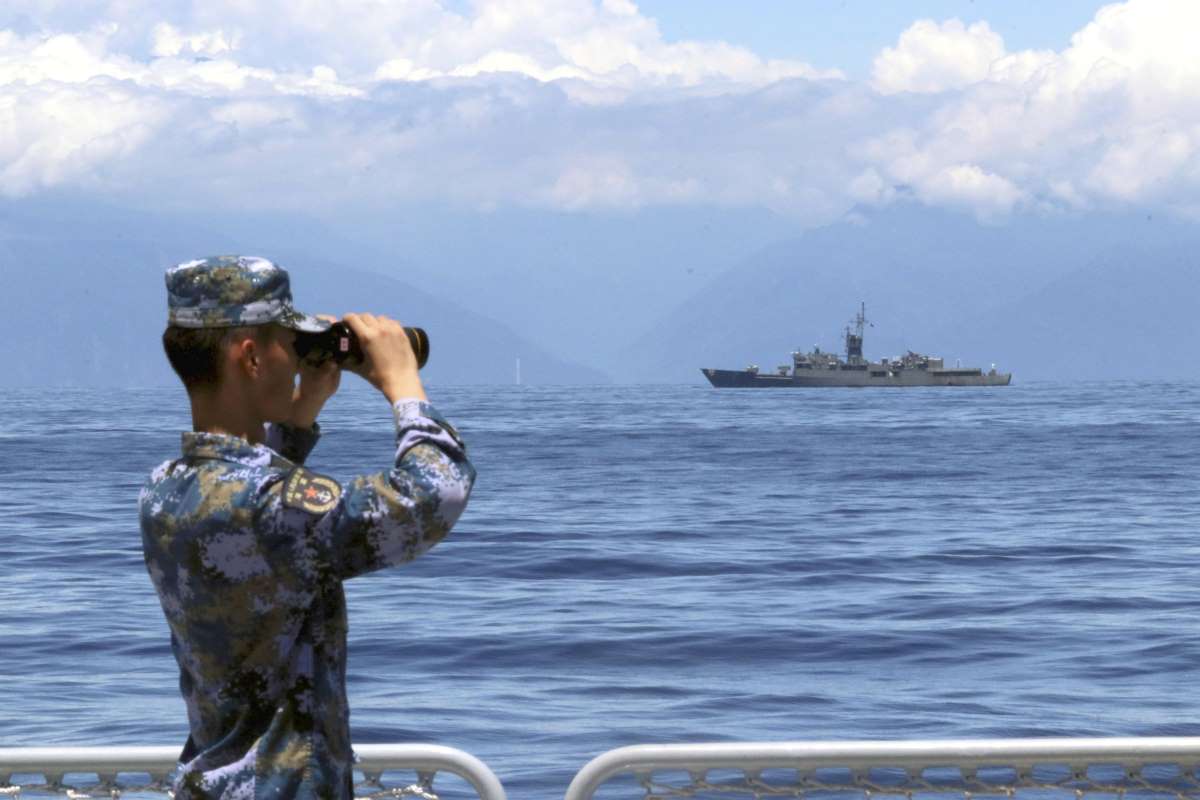 A soldier looks through binoculars during a Chinese People's Liberation Army exercise in the waters surrounding Taiwan on August 5, 2022 (© Xinhua via Kyodo).

The ruling Democratic Progressive Party's big defeat in late November's local elections in Taiwan came at a time when the party's approval rating at 33.5% was higher than 18.6% for the China-friendly opposition Nationalist Party, or Kuomintang. Why did it happen? President Tsai Ing-wen, the ruling party's leader, was criticized for making light of price hikes and other familiar economic problems in election campaigns while focusing on foreign and national security issues to warn against Chinese threats. But this may be only one of the factors behind the defeat. A more influential factor should have been the Chinese Communist Party's information warfare operations under its Three Warfares doctrine covering public opinion and psychological and legal warfare.

1.4 Billion Cyberattacks on Taiwan in a Year

Taiwan faced 1.4 billion cyberattacks apparently from China in the one year between September 2019 and August 2020. This includes the latest presidential election in January 2020. This is according to "China Security Report 2023" by the National Institute for Defense Studies, a think tank for Japan's Ministry of Defense. Naturally, we suspect Beijing could have staged a similar magnitude of information warfare operations this time too.

Additionally, the NIDS report notes that China expanded the Three Warfares strategy adopted officially in 2003. This was to establish the concept of "information dominance" required for air and sea dominance and evolved the concept into "mental/cognitive dominance."

The best way for China may be to lead Taiwanese people to believe that Taiwan's affluence and peace will be secured by its close relationship with China and to hope to achieve its fusion or union with China through support for the Kuomintang. China has learned from Russia's war in Ukraine that military power rather than information operations will be finally decisive. This is why China is striving to build military capabilities strong enough to deter United States intervention while stepping up information warfare operations in Taiwan.

A Taiwan contingency would surely be a Japan contingency. China's domination of Taiwan would shut down sea lanes supporting logistics for Japan. Moreover, it will represent China's first step toward its global domination.

China's breakthrough into Taiwan would be vitally dangerous for Japan.

Chinese President Xi Jinping, who began to serve his third five-year term as CCP general secretary through October's party congress, has advocated such slogans as the "Belt and Road," "Global Security Initiative" and "A Community of Common Destiny for Mankind." He is attempting to replace the postwar regime supporting the free world centering on the United Nations with Sinocentric values and a China-led order. If China is allowed to reverse values in the world, the future for mankind will be immeasurably clouded.

What Japan should do is clear. It is time for Japan to open a new horizon to enhance the mechanism for wide cooperation, information sharing, communications, and concerted actions with Taiwan and the United States. Japan should also proactively conduct information warfare operations to prevent Taiwanese people from feeling distrust in or insecurity about the United States and Japan and from coming apart. Then, Japan should enhance its military capabilities strong enough to earn not only Taiwanese but also American confidence.

(A version of this article was first published by the Japan Institute for National Fundamentals, Speaking Out #992 in Japanese on December 7, 2022.)