Taiwanese Student Rebuts WHO Chief, Strikes A Chord Among Japanese, Other Asians 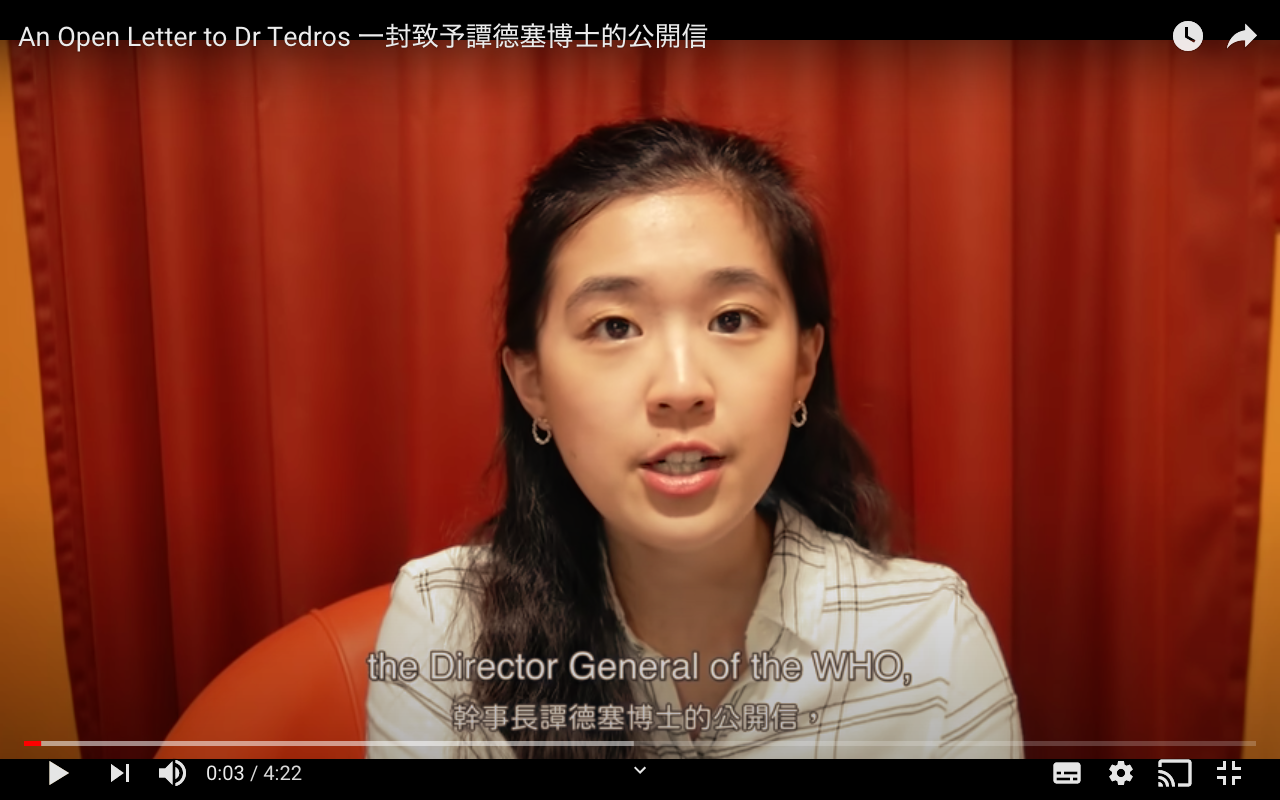 On April 8, Vivi Lin, a Taiwanese student studying infectious diseases in the United Kingdom, caused a stir on social media by publishing an open letter to Tedros Adhanom Ghebreyesus, the director general of the World Health Organization (WHO).

Lin condemned the director general in plain language for his accusations that the Taiwanese government was encouraging racist comments towards his person.

The video has been viewed more than 1.7 million times on YouTube. With subtitles originally in English and Taiwanese, it has included subtitles in Japanese since April 14. And it is striking a chord with people around the world.

How A Taiwanese Student Fought Back

Perhaps it’s a mark of the COVID-19 crisis that has us all cooped inside following the news, but a Taiwanese undergraduate student in the U.K. decided to fight back at the WHO director general’s unsubstantiated accusations.

Speaking to Director General Tedros as a Taiwanese, she expressed her disappointment:

Upon hearing your response in the press conference today, I was utterly shocked and saddened that such misleading allegations could come from a supposedly respected health professional and the head of the world’s most influential international health organization.

As a student who has been working closely with Taiwanese and British medical and health-related NGOs, I can affirm that there has never been any disrespectful comments from our government and our diplomats towards you and the African continent due to race, culture, or skin color.

Lin proceeded to enumerate the efforts that Taiwan had taken in its moves to fight against COVID-19 ー and world diseases in general ー despite being excluded from the World Health Organization.

“With all the aforementioned in mind, how can you, in a few sentences, attempt to smear Taiwan’s reputation with such irresponsible and false accusations?” Lin asked indignantly.

Lin concluded the video by underlining Taiwan’s commitment to progressive values, and “appreciation for diversity.” Finally, she asked Tedros to apologize for what he had said:

I, on behalf of my beloved country and people, am now asking for an apology from you under the current circumstances.

The response to the video has been largely approving, with more than 110,000 likes against 3,570 dislikes.

As of April 16, many foreign voices can be found among the more than 11,000 comments, expressing sympathy with Taiwan’s position. Among the comments were such as: “Taiwan can help, Taiwan is helping,” which received 1,019 likes.

Other comments included those from Japan, with messages such as: “We support you from Japan! Ganbare Taiwan! (Go Taiwan!).”

EDITORIAL | Amid Spread of Coronavirus, WHO Should Stop Blocking Taiwan’s Membership

The Spat Between Taiwan and the WHO

The words sound raw and angry when spoken by an undergraduate student, but the controversy was sparked by comments made at the highest level of the WHO during an April 8 press conference.

In the said press briefing, Tedros Adhanom Ghebreyesus accused Taiwan of being the originator of racist comments towards him that have been continuing unchecked for three months. Without offering evidence, the WHO director general suggested that, as a community, Taiwan directed insults at him, such as “black” or “negro.”

What makes me sad is… When the whole black community was insulted, when Africa was insulted, then I don’t tolerate, then I say people are crossing the line. When it’s personal, even death threats, I didn’t care. When as a community people are starting to insult us, that is enough.

The main point of the press conference was to call on countries to unite on a national and global level to fight COVID-19. But despite the subject matter, the director general felt the need to speak out about the supposed slurs he claimed came from Taiwan. He said these were abetted by the lack of action from the Taiwanese government:

Taiwan, the Foreign Ministry also, they knew about the campaign, they didn’t disassociate themselves, they even started criticizing me in the middle of all that insult and slur, but I didn’t care.

The Taiwanese Foreign Ministry pushed back on April 9, saying it “in no way encouraged” any personal attacks, and condemned “any form of discrimination.”

The President of Taiwan, Tsai Ing-wen, replied that, if anything, Taiwan understood discrimination all too well. She wrote:

For years, we have been excluded from international organizations, and we know better than anyone else what it feels like to be discriminated against and isolated.

The foreigh ministry also pointed out that, in a democratic society, people should be able to tolerate criticism.

And by any means, Taiwanese are not the only ones critical of the WHO and its handling of the COVID-19 crisis. On Change.org, a petition started on February 8 by a Canadian citizen called Osuka Yip has reached nearly one million signatures, as of April 16.

The main criticism is that the WHO badly mishandled the early months of the global emergency. The organization criticized those who called for early travel restrictions, said it thought the virus was not spread by human-to-human contact, and failed to declare a global emergency in time to stop the virus from spreading.