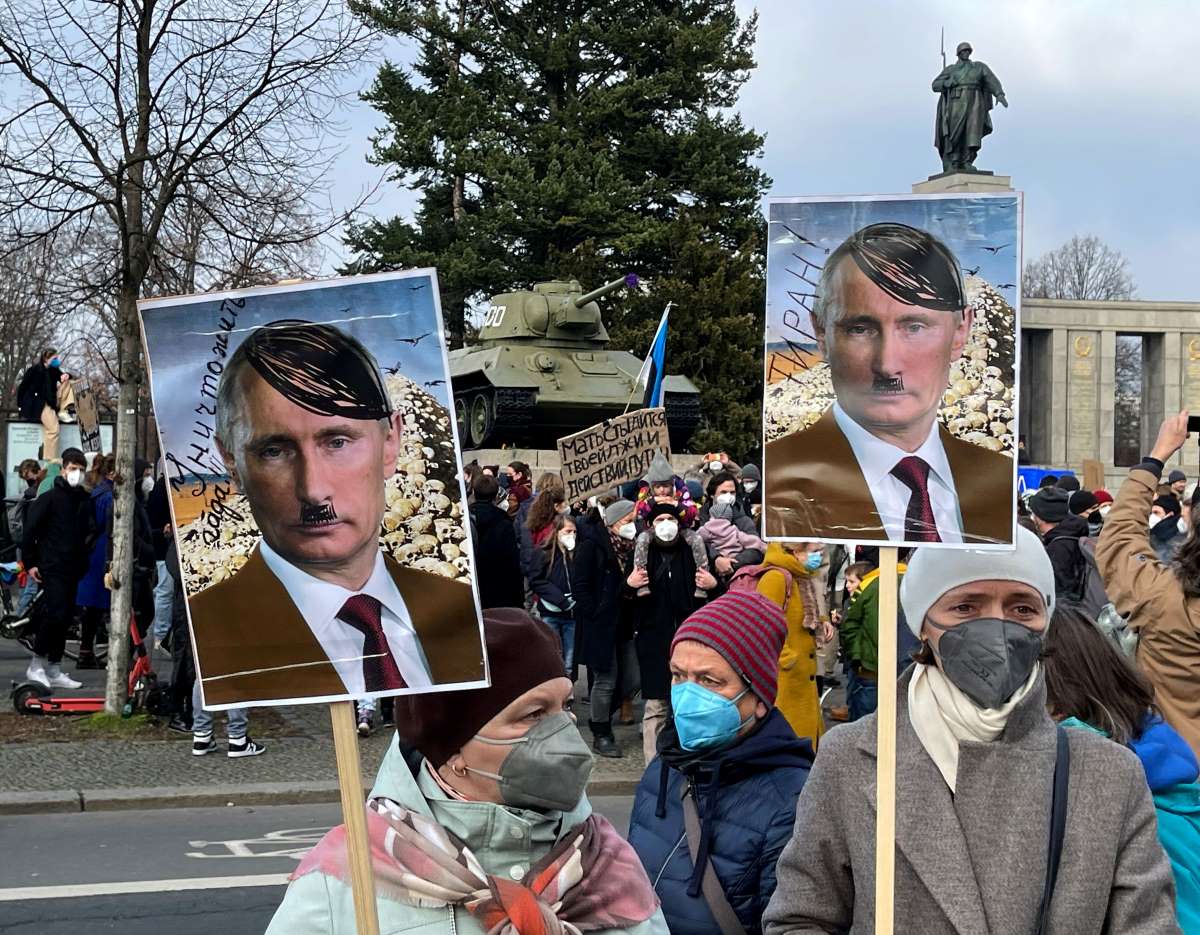 Demonstrators hold images of Russian President Vladimir Putin saying "Tyrant" as they gather during an anti-war protest in front of the Soviet War Memorial at Tiergarten Park, in Berlin, Germany, February 27, 2022. REUTERS/Pawel Kopczynski

Many Japanese people, including politicians, were deeply angered and disappointed by a tweet from the official Twitter account of the Ukrainian government. The tweet included a video that placed Japan’s wartime Emperor Hirohito next to Adolf Hitler as symbols of Nazism and Fascism.

It is no wonder that numerous critical comments were posted on SNS, saying, for example, “I no longer support Ukraine” and “Ukraine has revealed its true self.”

The Japanese government could not remain silent. On April 25, Deputy Chief Cabinet Secretary Yoshihiko Isozaki held a press conference to address the issue. He revealed that Japan had used official channels to demand the video’s removal. “It is utterly inappropriate to treat Emperor Showa (the posthumous name for Emperor Hirohito) in the same category as Hitler,” he said. “It is truly regrettable.”

This author was not shocked by the event, although there was a familiar uneasiness. I had a similar reaction when Ukraine’s President Volodymyr Zelenskyy compared Russian atrocities in its invasion of Ukraine to the Japanese attack on Pearl Harbor in his online speech to the United States Congress on March 16.

Even then I was not startled . I am familiar with the international community’s historical awareness level. In general, the knowledge of Japan is just that shallow.

And a major reason for this abysmal level of historical awareness is the Japanese government’s failure to disseminate accurate information, both in Japan and to the outside world. The government has made little effort to inform the public of the facts through education or public relations.

On the contrary, Tokyo has stayed silent in the face of incorrect  historical views of other countries, or has tried to pass them off with impunity, without taking the steps required to refute them. As a result, wrong views and prejudices have become entrenched.

On April 24, the Ukraine government officially apologized to Japan for the video mishap and removed the emperor’s image from the video. Ukraine’s Ambassador to Japan Sergiy Korsunsky tweeted, “Our deepest apologies for lack of historical awareness on the part of the video creator.” His language is notable because it acknowledged a common error.

Also, it should be noted that on April 25, Masahisa Sato, chairman of the LDP’s Foreign Affairs Division, complained about  the Japanese government’s slow response. “The video in question was up for almost a month, and the Foreign Ministry didn’t even notice. We are losing the information war,” he said.

This shows that the Japanese government is not only deficient in disseminating correct information, but it also fails to check other publicly broadcast information for correctness and accuracy. It is a problem that should be carefully investigated in the future.

Historical Error Revealed by the Video

Juxtaposing Hitler and Emperor Showa in the video shows that Germany and Japan were thought to be alike in the Second World War. The argument that Japan should follow the example of Germany because it is another defeated country has been raised often in the past. This line of thinking equates the wartime actions of the two countries.

However, is that perspective correct? There are decisive differences between Germany and Japan, as detailed by Tomohide Murai, Professor of International Conflict Theory and East Asian Security at Tokyo International University, in an April 19 Seiron column published in The Sankei Shimbun.

After the war, leaders of both countries were tried, sentenced, and executed in military tribunals. Allied officials sought to find crimes against humanity. At Japan’s Tokyo War Crimes Trials, there were charges prosecutors had wanted to bring but could not find a single person to accuse, even though they thoroughly investigated. On the other hand, at the Nuremberg Trials in Germany, 16 high ranking Nazi officials were found guilty.

In the war Japan fought, there was no genocidal plan for ethnic mass murder, such as annihilating the Jewish population in Europe by Nazi Germany. Thus, no Japanese leader was charged with crimes against humanity. Although Japan was an Axis ally of Germany, This point clearly shows the different nature of Hitler’s war and Japan’s war.

The turmoil over the recent Ukraine video was a reminder once more that Japan must do far more to disseminate the correct historical facts to the outside world. Moreover, it should also make sure the facts are incorporated into the education curriculum in Japan.