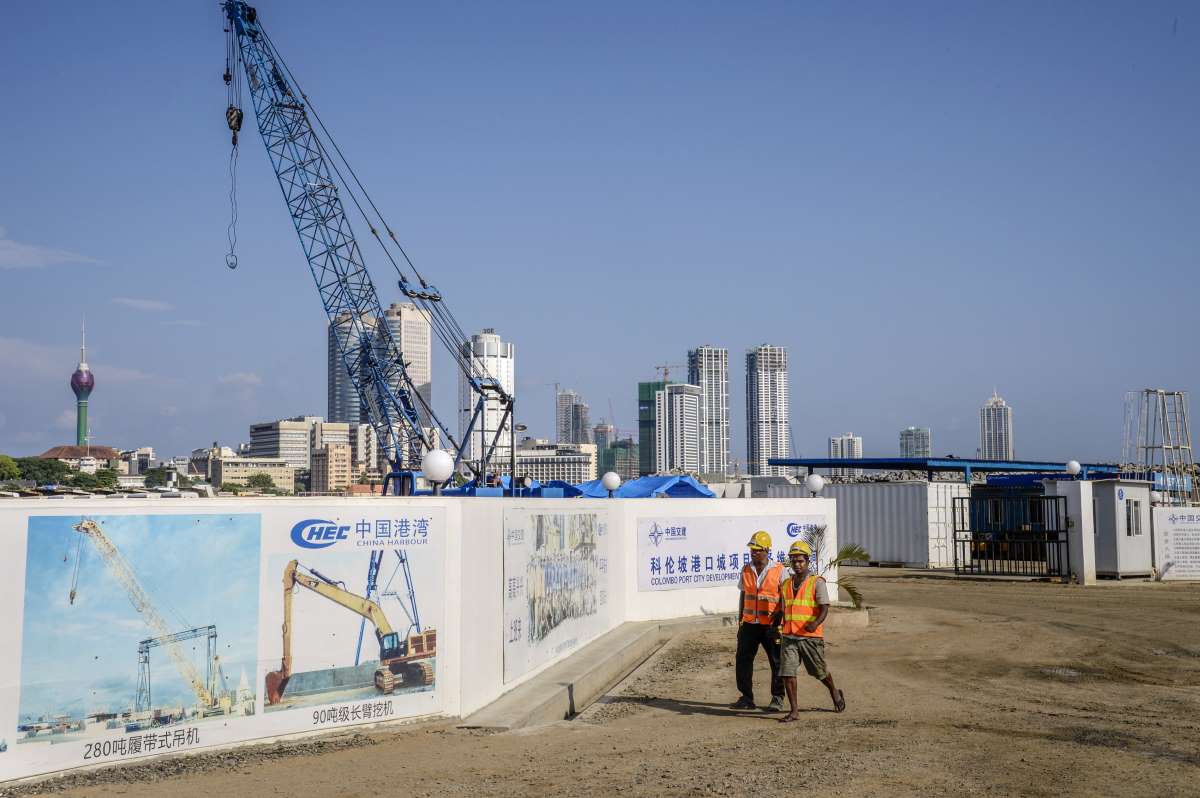 Workers walk inside Port City Colombo in Sri Lanka. The project is part of China's Belt and Road initiative (© Bloomberg)

The Belt and Road Initiative (BRI) announced by Chinese President Xi Jinping in 2013 began as the defining legacy of his rule.

Through it, the Chinese Communist Party (CCP) sought to penetrate its infrastructure-driven strategy into nearly 138 countries and international organizations. Often interpreted as a reminder of its "Middle Kingdom" concept, Beijing's infrastructure blueprint places China at the center of the world over the land and sea links.

China's policy of injecting investments and reaping disproportionate economic and strategic benefits is strikingly reminiscent of mercantilism. It led to a steep rise in Beijing's capacity to hold unprecedented foreign exchange reserves and invest further.

This mercantilist approach can be credited for launching China's rise into an economic dynamo with strategic ambitions well beyond its immediate territory.

But is this phenomenon gradually diminishing, and could it eventually disappear?

Is the Belt and Road Reaching a Dead End?

The BRI began as the launch pad from which China aimed to reshape the Indo-Pacific. This included expanding its totalitarian geographical presence. Domination by connecting the Eurasian landmass with the maritime routes of the Indo-Pacific was part of this strategy.

But it appears to be heading toward the doldrums. The initiative has come under roaring global criticism. Concerns range from debt sustainability, steep overvaluation, lack of investment transparency of BRI-related agreements, and political corruption, to the downright inferior quality of the infrastructure.

For that matter, nearly 35 percent of BRI projects are in direct violation of labor and environmental laws, causing huge public protests.

The so-called "defining project" of Xi Jinping's reign is being received negatively in many regions across the world. Public sentiment is increasingly turning against it. Besides, rising credit risks with exposure to Chinese debt now exceeds 10 percent of the GDP in many low- and middle-income countries.

The Belt and Road in Africa

In the specific case of Africa, China's BRI appears to be losing momentum as debts mount. Initially, Beijing had launched the BRI as a vehicle for its global expansion in ー and via ー Africa. However, it is no longer providing hard cash for projects across the African continent.

A debt-hit Africa is battling post-pandemic disruptions, including major loan defaults. Notably, China's overall BRI investments have fallen by 54% since 2019 to $47 billion USD.

During the 8th Ministerial Forum on China-Africa Cooperation (FOCAC), Xi Jinping offered a slew of incentives, including debt waivers. But he conspicuously omitted to make any big cash inducements for Africa. Instead, Beijing announced a $20 billion reduction in funding.

This scaling back in BRI lending has left many African economies vulnerable at a time of falling currency values, rising interest rates, and critical food and fuel shortages.

In short, these developments cumulatively signal that Chinese funding in Africa is declining, or perhaps, heading toward disappearing altogether.

At present, the fallout of a massive domestic property crisis that battered the Chinese economy is spreading into the deep tissue of its political economy.

China's property crisis began with slumping apartment sales and a rash of debt defaults by developers. Now, it has transformed into a major financial crunch at the local government level.

Xi faces a heap of domestic difficulties as he moves into the third term of his authoritarian rule. This means that he will come down harder by making complicated geopolitical decisions.

Unsurprisingly, Xi's speech at the 20th National Party Congress alluded to renewing China's focus on Asia. With this "turn towards Asia" announcement, Africa and its leadership will find themselves oscillating in a geostrategic space where they could lose their long-held leverage with Beijing.

Xi is also known to have politically invested in Africa by making many priority visits to African nations. He sought to ensure Africa's geopolitical alignment, as the new power games unfold across the Indo-Pacific.

Interestingly, China and Xi Jinping have taken note of the steadily rising backlash and negativity against the BRI in the past decade.

This can be gauged from the fact that Xi has not mentioned "BRI" in any of his 2022 speeches. One exception is his address at the United Nations, in which he said "advancing high-quality Belt and Road cooperation."