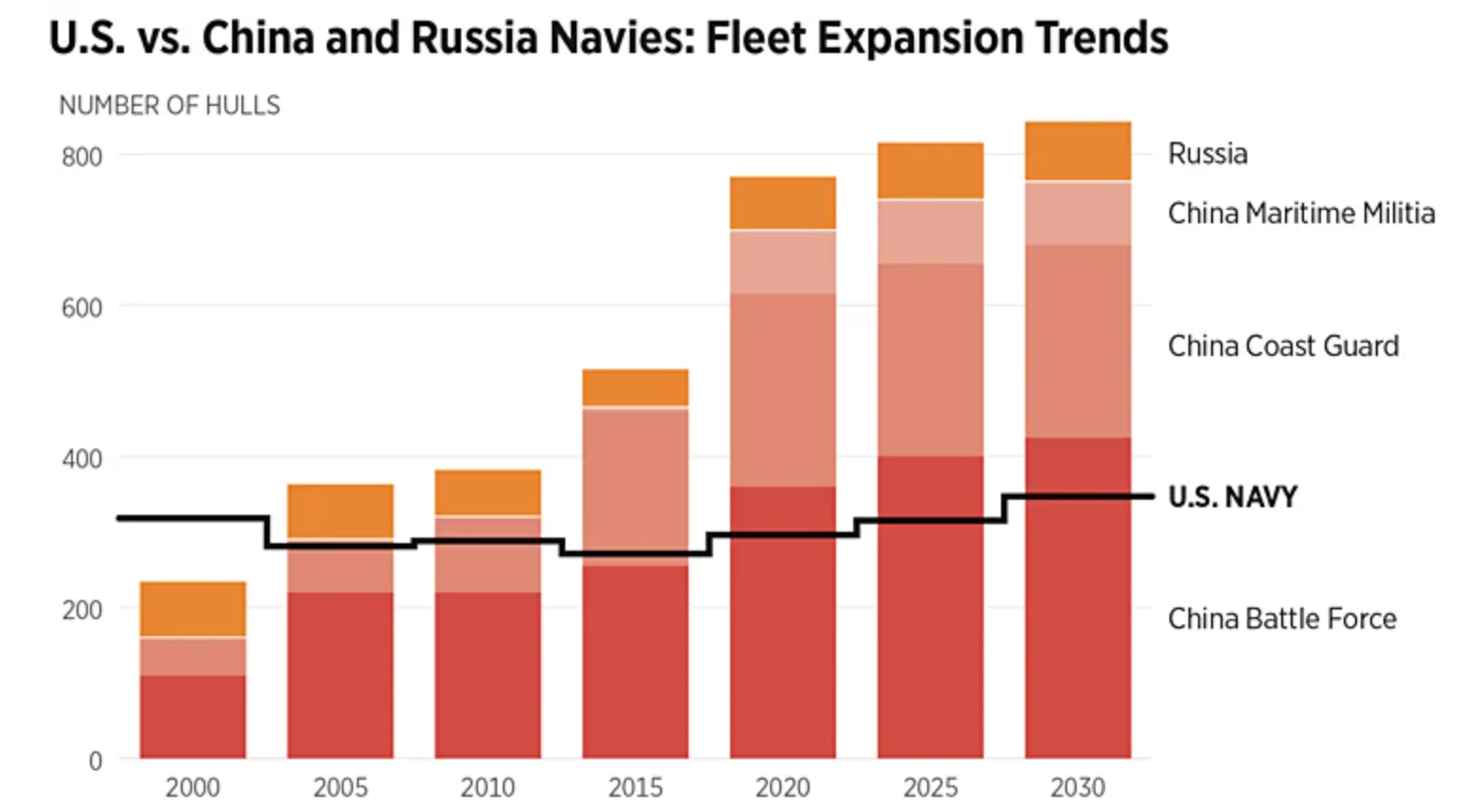 Chart showing that the Chinese navy surpasses the US navy in fleet quantity. (©The Heritage Foundation)

The US military is facing a formidable challenge.

All three documents identify China as America's most serious security threat. The reasons cited include advances in nuclear capability, coercion in the Indo-Pacific region, and antagonistic posturing in the wider international community.

The 2022 NDS states that China now represents "the most comprehensive and serious challenge to US security." Crucially, the publications establish that an effective counter-strategy requires US cooperation with allied nations. This is encouraging for Japan as a nation directly exposed to the military might of China.

But is the US diplomatic and security strategy a practical prescription for restraining an increasingly aggressive China?

Despite the hope placed on the US military by allied nations, including Japan, there is growing concern about a weakening US military in the American security establishment.

The US military has enjoyed the title of "the world's strongest" nation since World War II. However, the reality is that it could be defeated by China at its current rate of decline.

Just as the Biden administration announced these reviews, the National Congress of the Chinese Communist Party (CCP) was in session in Beijing.

CCP officials amended the party's supreme dictate to include a new phrase: "build a world-class military."

The target date for this objective is 2027. That coincides with the 100th anniversary of the military's founding. Many experts predict that China will attempt its military invasion of Taiwan by then.

The US policy think tank The Heritage Foundation released its annual US Index of Military Strength report in October.

Alarmingly, the report downgraded its assessment of US military strength from "marginal" to "weak" in 2022. It was the first "weak" rating the Heritage has given in the past nine years. Conversely, it rated Chinese and Russian military powers as "formidable," the highest on the scale.

The US Navy and Air Force were considered to be in particular decline.

With tighter budget constraints, some estimates suggest the number of ships in the US Navy fleet could drop to 280 by 2037 if this trend continues.

The Heritage report suggests that the US Navy needs 400 ships to accomplish its missions. According to the Congressional Research Service, the US Navy added 5 ships to its fleet from 2015 to 296 in 2021. In contrast, the Chinese Navy added 132 ships to a total of 348 in the same period.

At the same time, the growing China threat is not just about numbers. Its aircraft catapults and nuclear submarines have also challenged US technological superiority.

The US Air Force was rated as "very weak" due to aging aircraft, declining flying hours, and a critical shortage of skilled pilots.

But a strong US military is crucial for a functioning integrated deterrence strategy by the US and its allies. These include initiatives such as the Free and Open Indo-Pacific strategy to deter China and Russia from unilaterally changing the international order.

During the US-Soviet Union arms race in the 1980s, US defense spending exceeded 6% of its GDP. It ultimately led to America's Cold War victory. The current ratio is only about 3%.

History shows that deterring war is not a cheap endeavor. And that fact is a wake-up call for Japan.