The Man on Shinzo Abe’s Side: Yoshihide Suga, Top Bet for Japan’s Next Prime Minister 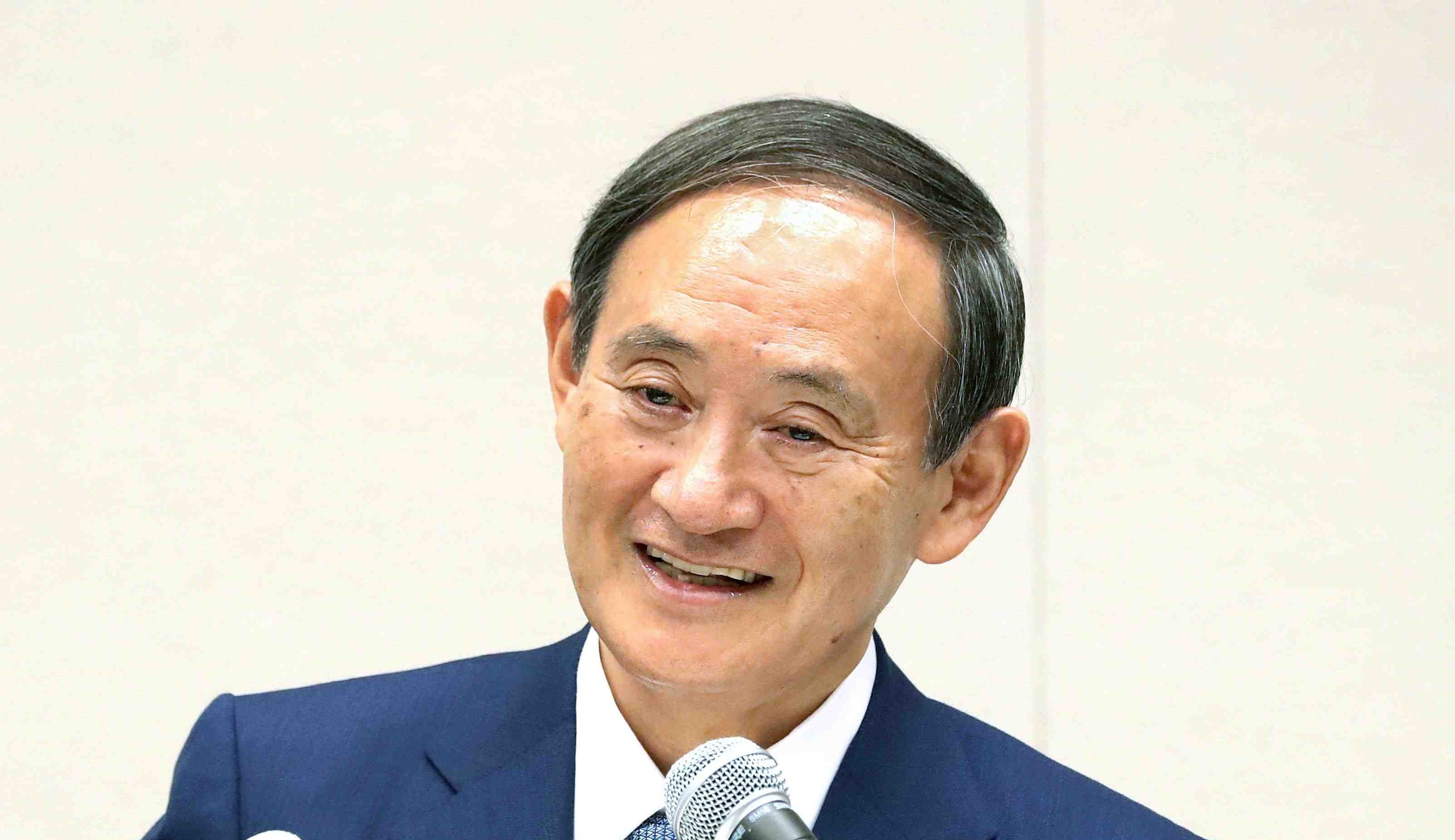 (Last of a two part series)

The big question everyone is asking after Shinzo Abe suddenly announced that he would step down is this: Who is going to be his successor as party leader and prime minister?

The spotlight is on Yoshihide Suga, the Chief Cabinet Secretary, who has gained widespread support as the possible next leader of the Liberal Democratic Party. The LDP, with its partner the Komeito, makes up the majority in both houses of the National Diet.

Many are speculating that in him we’re looking at the next prime minister of Japan. What is he like, and what policies will he be pursuing?

JAPAN Forward teams up to explore these issues with Yoshikazu Hiroike, a staff writer in the political section of The Sankei Shimbun who has covered both ruling and opposition parties in the past several years.

This is what you should know about Yoshihide Suga.

What is Yoshihide Suga like compared to his predecessor?

Mr. Suga is known as the person who has followed and supported Abe for the longest, working in the background along the way.

“My impression of Yoshihide Suga is that, in terms of character trait, he’s the opposite of Shinzo Abe in the sense that he’s a little serious, not colorful, he’s not much of a political operative,” said Hiroike.

With Mr. Abe’s worsening health, many in the LDP thought that there could be no alternative other than Suga to take over in an emergency.

Ultimately, in an interview with The Sankei Shimbun, Mr. Suga said his decision to run for president of the LDP was brought about by the wish to avoid a political vacuum:

I thought to myself, we can’t possibly create a political void. That's when I realized that perhaps it was time for me to step up, and that I shouldn’t run away from the responsibility.

What is Suga’s background?

In Japanese politics, it’s quite common to be a legacy politician, following a father or a grandfather who previously had a career in politics.

Two of the LDP contenders for president, Fumio Kishida and Shiberu Ishida, both 63, are also legacy politicians.

In the midst of all this, Yoshihide Suga, 71, comes from the countryside, from a small village part of Yuzawa in Akita Prefecture. He is the son of a teacher and a strawberry farmer. After high school, he left home for the big city life in Tokyo.

The young Suga worked several jobs to support his way through Hosei University and his law studies, with part-time jobs that included pushing a cart at Tsukiji fish market.

After a short stint in an electric construction company, Suga first realized his wish to enter politics, and at the age of 26 became private secretary to a Yokohama City council member. Working his way up, he was elected city councillor in 1987, and to the Diet in 1996 to represent the second district of Kanagawa.

During his professional career, Mr. Suga maintained a reputation for being the first person who arrived in the office in the morning, and the last to leave in the evening.

He got his big break during Shinzo Abe’s first stint as prime minister, when he headed the Ministry of Internal Affairs.

From 2012 to the present, he’s had the position of chief Cabinet secretary, the minister in charge of alleviating the burden of the bases in Okinawa and the abduction issue.

During the Abe administration, Suga as chief Cabinet secretary held press conferences twice a day, calmly replying to journalists’ questions even when they were critical, thereby gaining the reputation that managing difficult situations was his strong suit.

Still, Mr. Suga was relatively unknown by the general public until recently. This changed when he made the official announcement of the new imperial name, Reiwa, in April 2019. It gained him the popular nickname Reiwa Ojisan (Uncle Reiwa).

On other levels, too, Mr. Suga is a little atypical. Inside the LDP, he isn’t associated with any faction. And, unlike the stereotype Japanese salaryman, the chief Cabinet secretary is known for his sweet tooth, especially a fondness for pancakes.

He worked hard and overcame difficulties to become a politician. In the words of his favorite motto — according to his personal website — “Where there's a will, there's a way.”

Mr. Suga mentioned his personal background in the press conference announcing his candidacy as LDP president.

Analyzing why, Mr. Hiroike pointed out, “In Japanese sensibility, the story of someone who works hard to achieve his goal is one which pulls at people’s heartstrings, and one that people might want to support.”

Whether it is a factor or not, recent polls conducted separately by JNN, Yomiuri newspaper, and Asahi newspaper all show Mr. Suga’s approval ratings between 38% and 48% — at least 13 points above the runner-up, Shigeru Ishiba.

What policies is he likely to push?

Many are wondering whether the shy chief Cabinet secretary might change if he’s brought to center stage.

“There has been the question of whether Mr. Suga would change the way he interacts when he is put in the spotlight, but I don’t think so,” said Mr. Hiroike. “I think he will continue with his personal style.”

In terms of policy, Mr. Suga is known to have helped speed through key changes in the Abe administration’s policy making. One example is the emphasis on tourism in economic policy, more than tripling foreign visitors between 2012 and 2019 from 8 million to 32 million people.

Looking forward, he has openly said that he will continue many core aspects of the Abe administration policies.

On the economy, in an interview published on the Nikkei Asian Review on September 2, Mr. Suga said that he would like to “continue Abenomics and enhance it.”

The article suggests that differences in a Suga government might include a tightening of fiscal policy and favoring deregulation strategies, such as reducing cell phone fares.

There are yet unresolved foreign policy issues, including Japanese abduction victims in North Korea who have not been returned to Japan. As the minister in charge of this issue, he has pledged to bring it to resolution.

Regarding relations with China, Russia, and North Korea, Yoshihide Suga is widely expected to continue Prime Minister Abe’s legacy. For example, in his daily press conferences, he expressed the will to meet Kim Jong Un with no preconditions, a stance close to Mr. Abe’s. In addition, Mr. Suga has vowed to try to reach a peace agreement with Russia, including the resolution of the Northern Territories issue.

In an interview with The Sankei Shimbun published on September 5, Mr. Suga shared his willingness to spur debate on constitutional reform:

The world has changed a lot, and I think it’s the opinion of many citizens that the Constitution needs to be amended. I plan to create the right environment for the debate to continue among the different parties.

Therefore, in the balance between caring for the Abe legacy and pursuing his own, many think that the former might take priority. But Mr. Suga will still put his own spin to the administration.

“Probably, during this one year [before the general election in 2021] he will focus on the continuation of Abe’s policies,” explained Mr. Hiroike. “The tenureship of this administration is supposed to go until September 2021. After that, it’s possible that Suga will run again for election. In that case he might pursue policies that he personally would like to see through.”

Mr. Suga has not disclosed who he would appoint as Cabinet ministers should he become the next leader of Japan.

From a domestic perspective, one of the big issues facing the next leader is how to overcome the COVID-19 crisis. In the Sankei interview, Mr. Suga said that he planned to balance “avoiding an explosive spread of cases like those seen in the U.S. and Europe” while also “helping speed up the economic recovery.” It’s his belief that if both are not carried out, the economy will not be able to recover easily.

Mr. Suga also shared that the government is working to ensure a vaccine is available for Japan in the first half of 2021.

A related issue is the 2020 Tokyo Olympics and Paralympics, now scheduled for 2021. The incoming prime minister will be faced with the big question of whether, and in what form, the games could be successfully carried out.

Many are wondering how Mr. Suga will behave in the realm of foreign relations. As Mr. Hiroike put it, “In terms of the Japanese economy, and national security, relations with the U.S. are key.”

“Suga is a bit of a shy type,” Mr. Hiroike added, “It’s difficult to picture him entertaining President Trump like Prime Minister Abe used to, but I think it would be good to see him trying hard on that front.”

Perhaps to quell some of these fears, Mr. Suga addressed this in the Sankei interview, saying that his general countenance doesn’t mean that he’s not prepared for the job:

I’ve been told that I’m not strong in foreign diplomacy…. However, out of the 37 summits held between Abe and Trump, I’ve only missed one. Regarding Russia, China, North Korea, I was always made aware of the latest reports. In that sense, I’m conscious of the priorities, and I plan to continue taking steps in that direction.

With China’s leader Xi Jinping originally scheduled to visit in the fall of 2020, Mr. Suga shared with Sankei that his priority is to tackle the COVID-19 crisis, then appropriately schedule a visit thereafter.

Regarding the soured relations and refusal of the current South Korean government to accept the 1965 treaty called “the final agreement” on prewar and war-era issues, Mr. Suga reiterated Japan’s stance:

Because we consider the agreement to be the basis for Japanese-Korean relations, it’s normal that we are trying to stick to it.

The race towards the new LDP president position starts officially on September 8 and ends on September 14. Bookmark JAPAN Forward for the latest developments.