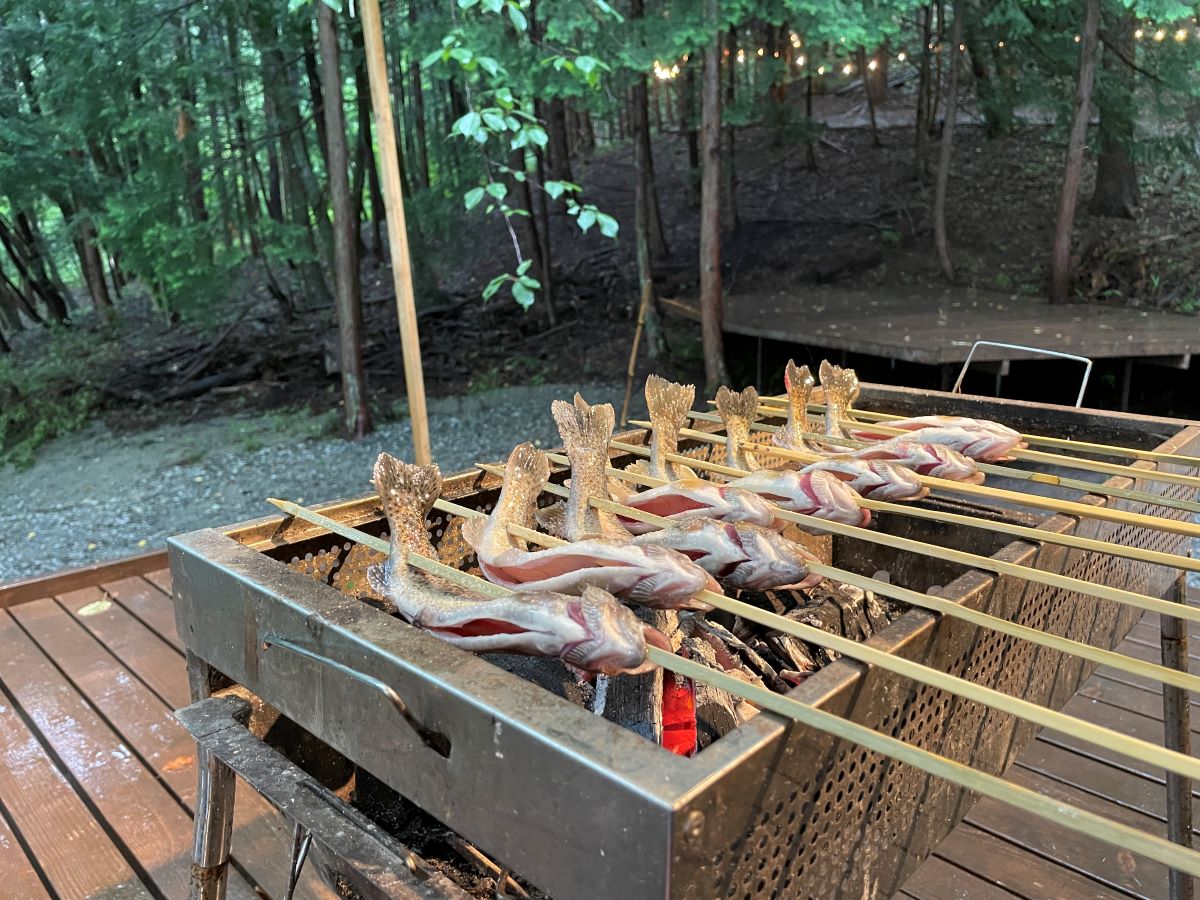 Grilling fish over the barbecue at Japanese summer camp. (Photo by Daniel Moore)

Growing up as an American kid in Japan almost 30 years ago, I had limited interactions with non-Japanese kids.

When asked if I was the only white kid in my Japanese public school, I would answer, “no, my sister attends the same school.” We spoke English at home, and our parents dragged us out of bed every morning to drill spelling, grammar, and vocabulary in English before doing it all over again in Japanese.

Language acquisition was not an issue, but because of my peers, l was culturally closer to a Japanese kid.

Later, I moved to America during my junior year of high school. Although I spoke English, there were times when I could not fathom the slang, cultural references, humor, and explicit language coming out of other kids’ mouths. Looking back, I was experiencing culture shock.

To expose me to American culture and values growing up, my parents sent me to summer camp in the United States every year. Japanese schools had a notoriously short summer holiday, so we received special permission to extend summer by a few weeks.

Knowing only this context, I thought America was paradise. I visited retired grandparents who intentionally spoiled me and didn’t have to worry about school. It seemed to me that everyone played and did whatever they wanted, all the time. It was undoubtedly a unique upbringing. And though I disliked being different from my peers in Japan, I now appreciate the numerous opportunities such an upbringing provided.

Speaking both English and Japanese, I recently had an opportunity to work as a camp counselor at a Japanese summer camp in Yamanashi Prefecture. The camp wanted to offer an English-only day so the kids could practice English conversation, hopefully gaining interest in learning more.

Although my experience has been limited to a couple of camps in each culture, I feel qualified to offer at least a snippet of insight reflecting on the value of how each culture educates kids, and comparing the lessons on how we might include them in our own lives or kids’ educations.

The first stark difference is between a liability versus a privacy culture.

Camp management’s most significant concern in America is avoiding lawsuits. The first instructions counselors receive are: “Never touch a camper, never be alone with a camper, and heaven forbid, never expose any extra skin.” There are famously more lawyers in the state of Texas than in the country of Japan.

The camp experience in Yamanashi is the complete opposite. From day one, the kids are constantly hugging me, punching me in the groin, and pulling my leg hair, claiming I could be popular with girls if I did laser hair removal. It feels like a battleground – it’s fun.

Onsens (hot springs) are an ubiquitous feature of Japanese culture, so in the evenings, camp counselors of the same gender bath together, naked, with the kids (gasp). You could never do that in America ー too many incidents have occurred.

To me, the greater freedom kids and adults have to interact at Japanese camps is preferable. When kids asked me what kind of beer I liked, I am allowed to speak honestly.

Low on Adventure, Obsessed with Security

In an 8-person summer camp, kids have private lockers to keep valuables safe. Chain restaurants often feature lockboxes to safeguard old stinky shoes. And getting into an online banking portal requires five separate sets of passwords.  In contrast, accessing my US bank only requires putting the phone in front of my face.

Personal information in Japanese summer camp is safely guarded , too. I had to sign a contract saying I would not share photos on social media or use kids’ names. Taking pictures of kids without masks is frowned upon.

Whereas I often exchange emails with counselors or campers I met in the US to keep in touch, taking a kid’s contact information at the Japanese camp is a no-no. That is kojinjoho (personal information), so you cannot ask for it.

From my perspective, the Japanese fear of a stalker appearing at their house after finding their information online is irrational. Maybe there is some horror movie based on that storyline, and of course it may have happened occasionally. But the concerns seem outweighed by the actual risk.

Although the United States is a liability culture, the activities involved at summer camps are much more adventurous than in Japan. Maybe Japanese kids from the city just aren’t used to rigorous physical activity.

A day at an American camp might involve horseback riding, wakeboarding, canoeing, blobbing, water sliding, dodgeball, and playing the sport of your choice. In Japan, the most strenuous day might entail making bamboo fishing poles to catch trout and going for a 1-hour hike.

In the Yamanshi camp’s case, it turns out to be a night hike, and we tie the kids to each other in a line so they can’t get separated from each other. Optics-wise, there is no way you could do this in the ‘States. Tying the kids together also seems to cause more stumbles than letting them hike on their own anyway, like a dog getting tangled in its leash. Apparently it is a team-building exercise.

Speaking of teamwork, camps are an extension of the education system, so what kids learn impacts the culture. It’s a continuous cycle: kids growing up in a culture pass the lessons to their own children someday.

A guide friend once succinctly summarized the difference between education systems:

From that perspective, each education system does its job rather well. There is teamwork at American camps, but it mostly takes the form of individuals competing for the benefit of their team or tribe. There is competition almost every waking moment.

At Japanese camps, it’s less about competition, and more about getting everyone involved, working together towards a common goal.

Unsurprisingly, America has the highest level of individualism in the world, while Japan is highly collectivist. American counselors might scold kids by saying, “What you did was wrong.” Japanese counselors would say, “Look around you; no one else is doing that.”

Finally, the most Japanese thing noticeable about the camp in Yamanashi is that everyone (including kids) is required to wear masks the entire time.

Admittedly, the reason is not because anyone thinks this would prevent the spread of COVID-19. Kids are eating at the same table and sleeping in the same tents so that ship has already sailed. Instead, because kids are taking photos, the camp doesn’t want to get in trouble with the parents when the kids send the photos home.

Much of Japanese etiquette is about making a little effort, or at least looking like you are trying. The mask-wearing sums it up perfectly.

I love camps and think they teach kids valuable lessons like outdoor skills, activities they can’t normally try, and the love of nature. It’s also important for children to be away from their parents, cooperate with other kids, and of course, learn some teamwork.

I definitely want to send my kids to camp someday. And it’s fun to think about what I want to teach them about each culture through the lens of summer camps.

Learn more about the wild side of Japan through Daniel’s essays, here. Leave questions or comments in the section below, or reach Daniel through Active Travel Japan.