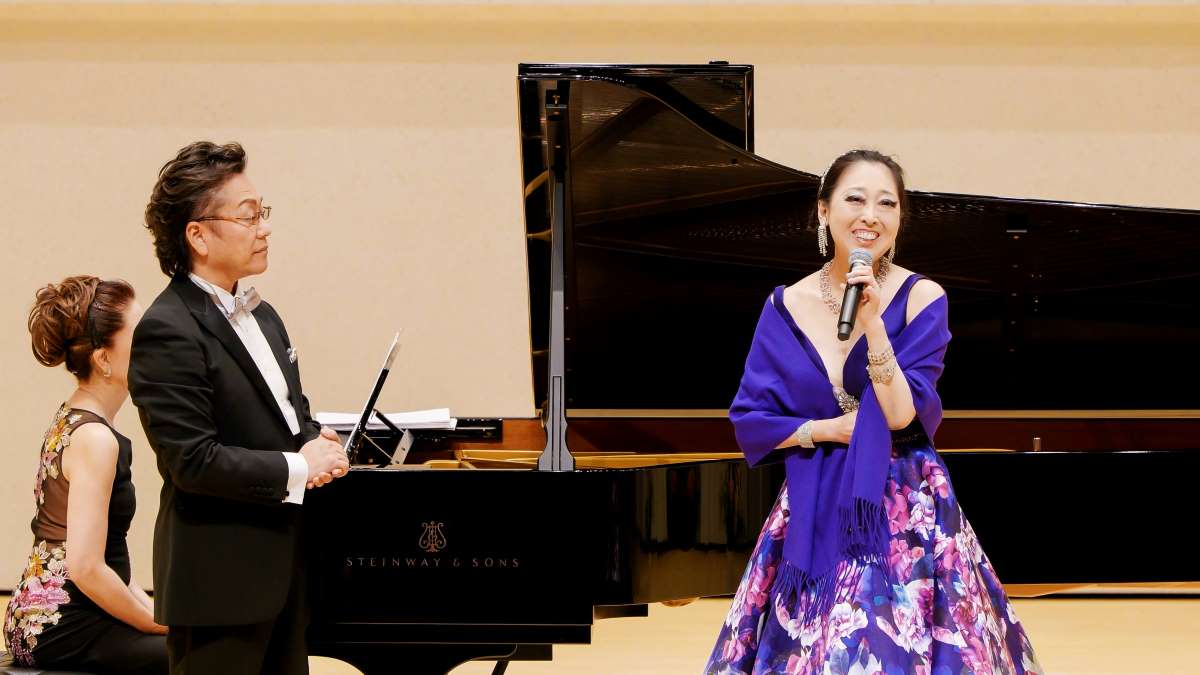 In early March, tenor singer Masahiro Shimba spoke to me about his concert scheduled for two months later at Orchard Hall, Shibuya. The concert had been postponed to April this year.

“I decided to continue with the concert tours, and will do whatever it takes to keep my commitment,” Mr. Shimba told me. “Even in the unlikely event that I incur debt because of a lack of sponsorship, I won’t cancel the concert,” he added, looking a little tired.

Shimba is a tenor singer who has trained in Italy for more than 20 years. In 2011 he heard about the Tohoku earthquake and tsunami through the news in Italy, and the enormous extent of the damage rendered him speechless. He thought that, as a Japanese person, he had to do something.

Organizing charity concerts in aid of post-earthquake reconstruction efforts is something Mr. Shimba has been doing ever since, with the support of Cardinal Monterisi of the Vatican at the headquarters of the Roman Catholic Church, with whom he has ties. The first concert was held in 2012, and alternating between Vatican City and Japan, they are now in their 9th edition.

This year, however, just before the 2022 concert tour was about to begin, sponsors withdrew their support as a precaution against COVID-19. Nevertheless, Shimba decided to go through with the tour.

“It would have been inexcusable to the people living in the disaster-stricken areas to cancel the concert tour because of COVID-19, when I had already said that I would do it. Trust can only be won by doing what you said you will do,” he explained.

I first met Mr. Shimba in 2017. At the time, I was suffering from an intractable connective tissue disease that had worsened to the point where I was given not long to live.

That was when I wrote the song “Aoi Densetsu” (literally, blue legend) with the sole intention of expressing my gratitude to Shigeru and Sakie Yokota, whose daughter is a victim of the North Korean abductions, for being very good to me. I wrote the lyrics and the music was composed by pianist Seiji Endo.

Because I wanted to raise global awareness of the abduction issue, I thought performing the song somewhere in the Vatican and creating a YouTube video might make it go viral. But I didn’t know how to go about getting the necessary permissions. That was when Mr. Shimba appeared to me like a blessing from heaven. And a few months later he arranged for me to meet with Cardinal Monterisi.

At the time, there was a strange atmosphere in Japan in which people feared mentioning the abduction issue. But Masahiro Shimba, who had been living abroad, had no qualms at all.

“Let’s make the world know that innocent people have been abducted in state-sponsored kidnappings [by North Korea], and call for their rescue,” he said. Amazingly, he even arranged for me to sing it in the Basilica de Santa Maria Maggiore [one of the four papal basilicas] in Rome.

Mr. Shimba surprised me then, but I was also awestruck by his sheer determination to go through with the Tohoku concert tour in May. His resolute will to keep his promise touched the hearts of those affected by the disaster and moved not only the corporate sponsors but also the Vatican.

Balm on the Scars of Tohoku

While looking at the spacious grounds of the Miracle Pine Tree Memorial Park during my first visit to the disaster-stricken area, a local person explained to me that it all used to be a residential area. The “miracle” pine tree was the lone surviving tree of the disaster. Although it had since died, it had been replaced by a replica.

I was horrified that a tsunami could wash away so much land in an instant. And I couldn’t even begin to fathom the depth of the emotional scars borne by the survivors.

When the hour came for the concert, the large concert hall in Rikuzentakata was limited to half its capacity as a precaution against the spread of COVID-19. But the audience watched the performers intently, sometimes in tears, and sent forth huge waves of applause.

The next day, another concert was held in a small hall in Iwaki. It was filled to maximum capacity and permeated with shared passion and enthusiasm. The audience’s reaction made me keenly aware of how much the survivors longed for art.

Koji Murakami, head of the Policy Promotion Office in Rikuzentakata, said, “We have made a lot of progress in building reconstruction, but we still have a long way to go in terms of emotional recovery.”

Toshio Murayama, a supporter from Iwaki, shared his feelings with tears in his eyes. “I think politics is working in ways that are not benefiting us. I want the politicians to find out what we actually need and do what is best for us.”

Eleven years have passed since the Tohoku disaster. Recently, news coverage has been mainly devoted to the situation in Ukraine. Even the recent big earthquake in Tohoku was hardly mentioned.

But the wounds left by the Tohoku earthquake and tsunami have yet to heal, and the region is always threatened by the possibility of earthquakes. I believe wholeheartedly that Tohoku needs more support, both material and moral, and a stronger commitment by the whole of Japan to stand by them.

That’s why I want to attend Mr. Shimba’s concert again next year. Not just a concert, but it is a concert with power.

Only art born from strong determination can heal deeply wounded hearts. As Mr. Shimba said, the concerts are worth continuing, even if it means giving everything he has.

May we never forget those who are still in deep suffering from the trauma of the earthquake and tsunami.

Find articles about Tohoku’s recovery from the 2011 earthquake at this link.

(Read this article in Japanese, here.)

Find other essays by the author at this link.