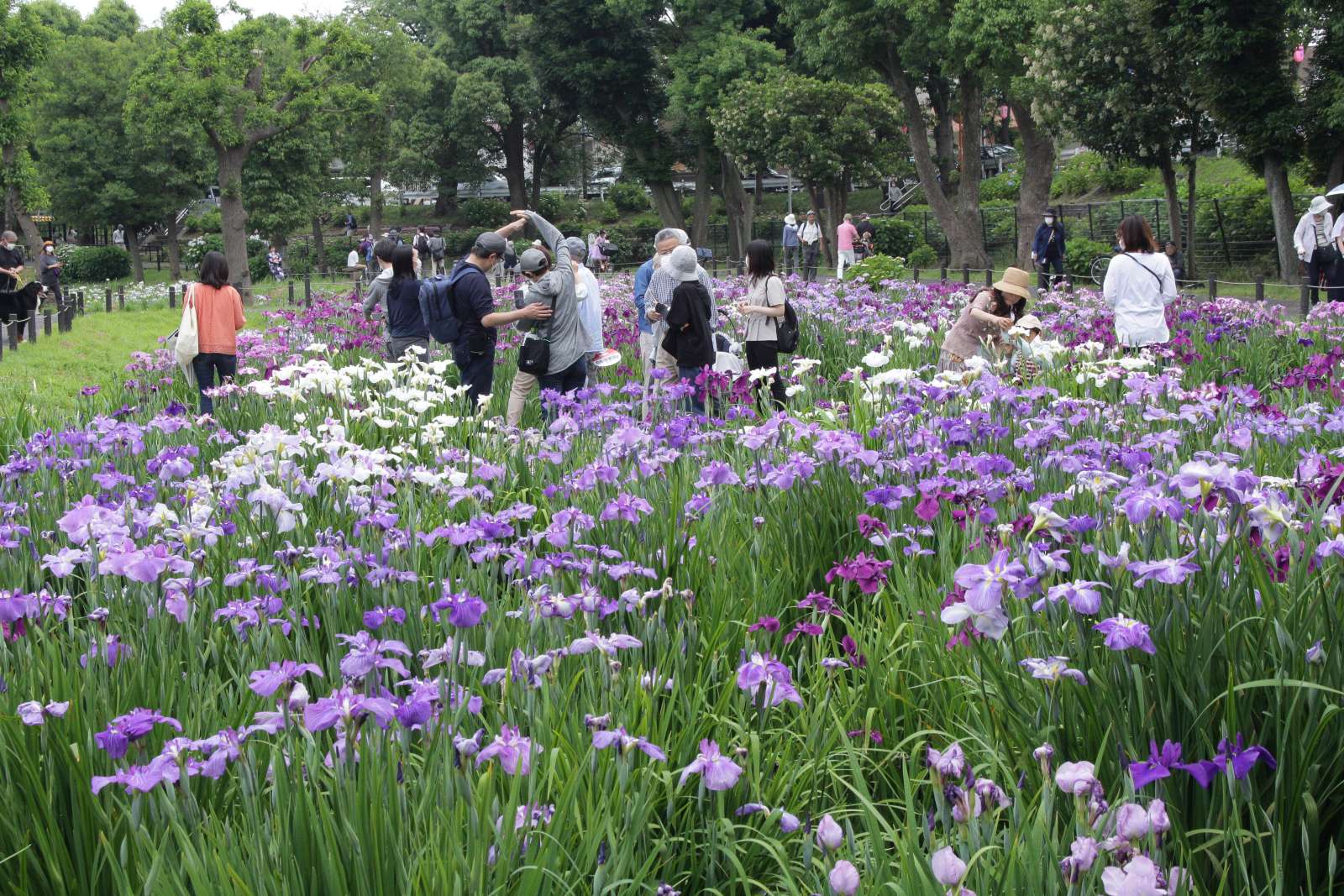 Iris at Mizumoto Koen in Tokyo. Unlike sakura viewing which can get rowdy because of heavy drinking, the iris viewing was very subdued with people concentrating on selfies and closeup snapshots.(June 2022)

On June 5, my wife and I cycled to Mizumoto Koen, our favorite park in Tokyo. Our reason for going on the 5th was the Katsushika Iris Festival 葛飾菖蒲まつり which is scheduled to run until June 19th (Sunday).

We did not know quite what to expect. While we worried that the area near the iris beds might be jam packed with people enjoying a flower festival after two years of cancellations throughout Japan, we were pleasantly surprised. There was a good but not overwhelming crowd and the flowers were ー as expected ー well worth the viewing.

Hydrangeas, called ajisai in Japan, were also in full bloom. And waterlily blossoms were just starting to appear. More than the usual number of cormorants were resting or preening in the bird sanctuary.

Aside from the flowers themselves, there were a number of attractions not normally part of the Mizumoto ambience.

A stage with live drummers and a flutist were providing traditional music for a large number of dancers, mostly men and women in costume from the communities near the park. There were also a few ad hoc participants from the audience.

Young women in very colorful kimono posed at various points that provided a scenic background. Each was surrounded by a score or more of men, most with an impressive array of camera equipment, who had registered for the photography event.

Street vendors and mobile food stands, not normally present in Mizumoto, were serving long lines of hungry festival participants and providing trinkets and balloons for kids.

Mizumoto Park is dog friendly, although they must be on a leash. There are dog runs in the park.

Japanese drumming 和太鼓 leads the special attractions on June 19, along with flower dancing.

Produce from Katsushika is on sale on June 12 and 19.

Food is available from a dozen stalls and vans. Nonetheless, unless you like standing in lines, it is preferable to bring your own food. The queques for these peripatetic vendors can be quite long, as is the case for the small restaurant and snack shop in the park.

The area surrounding the park is residential. It is some distance from the nearest restaurants and convenience stores.

There is also a barbecue area within the park. Reservations are required.

Cycling is the most pleasant way to get to Mizumoto. The eastern edge of the park is bordered by the cycle course on the west bank of the Edogawa river, while the western edge is a short ride from the cycle course along Nakagawa.

Regularly scheduled buses from Kanamachi also have stops near Mizumoto. And a shuttle bus 水元公園循環バス（金63) operates Saturday, Sunday, and holidays with a stop one minute walk from the iris beds in the park.

Parking for 1170 cars is available at Mizumoto. But this can fill up quickly on weekends. And the narrow two-lane roads serving the park will have long tailbacks at peak entry exit times.

Mizumoto is largely flat with most paths paved or hardpack dirt. In my many visits to Mizumoto, I have always seen wheelchair users both powered and hand propelled.

The same shuttle bus that serves Mizumoto Koen also serves Horikiri Shobuen (Horikiri Iris Garden). It is a municipally run garden on what was the site of a commercial garden, one of a number of such gardens that once existed in this area.

It is a ten-minute walk from the Horikiri Shobuen Station on the Keisei Line. There is no admission charge.

The Garden is flat and well prepared for wheelchair users and baby carriages.

Because the Garden is dedicated to iris, with 200 cultivars and 6000 plants, it is an excellent venue for floral photography. There is a great variety of blossoms to be seen.

Viewing the iris in the Garden will not take more than an hour or so and can easily be done in conjunction with a visit to Shibamata, the funky and traditional locale that was the starting and ending point of the immensely popular movie series It’s Tough To Be A Man (Otoko ha tsurai yo).

Inner Garden at the Meiji Shrine

While Mizumoto Park and the Horikiri Garden present iris in a flat open environment rather like paddy fields for rice, the Inner Garden at the Meiji Shrine (Meiji Jingu) is something of a Japanese formal garden with the iris planted in a series of beds in a winding valley.

The beds are not wide. Closeup photos of flowers not immediately adjacent to the paths on either side of the valley require only a short telephoto lens.

The valley setting gives an overall ambience that we found more attractive than that at Mizumoto Park or the Horikiri Garden.

Waterlilies were also in bloom in the Garden pond when we visited and were attracting nearly as much attention as the iris.

It is a short walk to the Inner Garden from JR East Harajuku Station, which is next to the main entrance to the Meiji Shrine. There is an entrance fee of ￥500 JPY for adults.

The design of the Inner Garden makes it unsuitable for wheelchair users, although much of the rest of the Meiji Shrine is barrier free.

This Japanese-style formal garden is known primarily for its exceptional autumnal colors. But it also has a small but attractive iris area that is currently in full bloom.

Although the iris beds are not in a valley as at the Meiji Shrine. Instead, they are surrounded by very vivid greenery. A boardwalk on one side of the beds allows closeup photography and viewing of the blossoms.

Further, because this garden does not attract the crowds during the iris season that other gardens and parks do, more leisurely viewing and photography is possible.

As was the case with the Inner Garden at the Meiji Shrine, waterlilies were also in bloom.w

Unfortunately, much of the Garden is not suitable for wheelchair users.

Although the rainy season in Japan means unpredictable weather, it is a great time for flowers, flower viewing, and flower photography.

Misty or overcast days make photography easier. An absence of intense sunlight means an absence of extreme contrast and flares from facing in the wrong direction. Flowers and foliage glisten while they are still damp from a shower.

The waning of the pandemic is leading to the holding, sometimes at reduced scale, of floral themed festivals that have been canceled for two years running.

In addition to the Katsushika Festival, the Hakusan Ajisai (hydrangea) Festival will be held with some limitations. Noted hydrangea viewing sites were taken up in JAPAN Forward in 2021, in “Ajisai: Colors and Patterns that Brighten Japan’s Rainy Season.”

Whether it is iris, hydrangea, lotus, or other flowers, spring is a fine time in Japan. Just remember to have an umbrella or kappa (simple raincoat) handy. Usually the showers don’t last long and everything looks better after.

Photographs by EH Kinmonth. Find other stories about Tokyo and nearby areas by Dr. Kinmonth at this link.