On the 30th of October, the United Nations Educational, Scientific and Cultural Organization (UNESCO) announced the registration of a number of new items in its Memory of the World catalog. However, it put off a decision on documents concerning the comfort women jointly filed by private organizations in eight countries and regions under the name “Voices of the ‘Comfort Women.’”

The joint application from groups in Japan, China, Korea, and other countries asserts that the comfort women were “sex slaves” of the Imperial Japanese Military. These groups have a history of condemning the Japanese government.

For its part, the Japanese government has vigorously protested that UNESCO is being used for political purposes. At the same time, a competing application under the title “A Record of the Comfort Women and Military Discipline” has been filed by a conservative Japanese group. It insists that “the comfort women were not sex slaves.” This, too, put forward in conjunction with a private American group, was also deferred.

Two years ago material submitted by China under the name “Archives of Nanjing Massacre” were registered without Japan being given an opportunity to make a rebuttal. This led to the government of Japan making a request that the approval system be reformed. On the 18th of October the executive committee of UNESCO adopted a resolution calling for the avoidance of acts that would exacerbate political tension. This was reflected in the meeting of its International Advisory Committee (IAC) that took place in Paris October 24-27.

There was tension at UNESCO while the IAC was meeting. The Japanese government had indicated that it might stop funding UNESCO if the materials of the joint application were accepted. This was seen as a major danger following in the wake of the decision by United States President Donald Trump to withdraw the US from the UNESCO.

In 2011, when Palestine joined UNESCO, the US, which had been providing 22% of member nation contributions, suspended its payments. This forced UNESCO to put several new projects on hold.

Currently, Japan is the largest single sponsor providing 9.7% of member contributions. A high-ranking official in UNESCO has expressed the fear: “If the 30% in contributions provided by Japan and the US are taken away, UNESCO will not be able to continue operating.”  China has been in third place with a 7.9% contribution, while South Korea contributes 2%.

Once again the “flawed” vetting process of UNESCO that takes place “behind closed doors” was called into question. The IAC, a panel of specialists, makes the recommendations for inscription in “Memory of the World.” The secretary general of UNESCO then gives final approval. 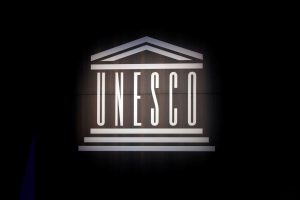 This year, as has been the case in the past, the nature of IAC deliberations has not been made public. Only the result has been announced. Although the final decision is left to the secretary general, on the principle of “not getting involved in a political decision,” in reality it is the IAC that is given the power to decide.

But, the IAC does not really have the wherewithal to determine whether the content of submitted material is factual or not. This was once again the case with the vetting of the comfort women material.

The IAC is composed of 14 specialists in the management of official documents. The secretary general of UNESCO appoints them on a regional basis. Even within the IAC there was opposition to vetting “political matters” when there was a sharp confrontation over national interests.

The “flawed” nature of the vetting was pointed out in 2015 when “Documents on the Nanjing Massacre” submitted by China were registered. At the time, the presiding chair Dr Abdulla Alraisi said, “It is written that there were 200,000 victims, but in fact we do not know the actual number. If we want to check this, we will need to look at documents from around the world.”

Moreover, a large number of the documents were digital copies. The originals were not presented. Some members of the IAC voiced their frustration, saying, “How are we supposed to pass judgement?”

When something is registered in “Memory of the World,” UNESCO is in effect validating it as “historical materials that the world should keep in its memory.” Had the comfort women material been accepted for registration, it would have done great damage to Japan.

This time UNESCO promoted dialog among those making application to register materials. 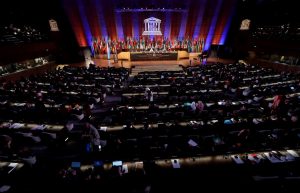 A general view shows the opening of the 39th session of the General Conference of the United Nations Educational, Scientific and Cultural Organization (UNESCO) at their headquarters in Paris, France, October 30, 2017. REUTERS

However, the interpretation of the comfort women in the competing applications is completely different. One sees them as “sex slaves of the Japanese military.” The other sees them as part of an “official brothel system for the military.”

Thus, on the one side, informed observers opposed to registration say, “It is to be welcomed that there will be no registration as long as there is no mechanism for agreement.” But on the other side, the Korean government issued a statement on October 31st, saying that the decision to defer a decision on registration was “regrettable.”

Tsutomu Nishioka, a visiting professor at Reitaku University and an opponent of registration for the comfort women material, observed: “In principle, there should be registration when the concerned countries agree. We welcome the creation of a structure for not inscribing materials in the interest of avoiding political tension when the parties cannot agree.”

He further pointed out: “With the participation of Japan, where research on the comfort women is progressing, the applications have become more refined than in the previous case when China applied in isolation. Although the diplomatic efforts of the government are to be applauded, public relations efforts were inadequate. There ought to have been a more proactive effort to explain why the comfort women were not sex slaves.”