[Asia’s Next Page] Amid COVID Pandemic, China Revs Up Its U.S. Strategy 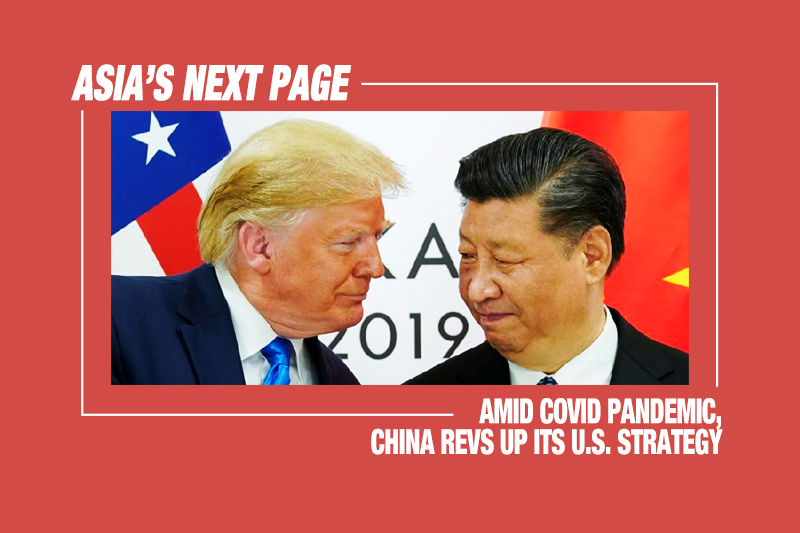 As questions hound the Chinese leadership at home and abroad over the origin, outbreak, and failure to contain the virus, Xi Jinping’s foremost challenge is how to manage Beijing’s relations with the United States ― and keep it from deteriorating further.

President Xi’s recent telephonic conversation with President Donald Trump, urging the building of a “relationship based on non-conflict and confrontation,” only points to such a Chinese disposition. How does the Xi Jinping administration foresee its relationship with the U.S. unfolding in the post COVID-19 period?

Beijing has seen the United States as its principal strategic rival in global affairs since long before the age of the Indo-Pacific. The post-9/11 period witnessed the Chinese leadership’s prime global strategy on how to minimize the global strategic gap that has existed between the U.S. and China is emerging to be Capitol Hill-centric.

For Washington, the strategic objective has been to uphold its supremacy under the current rules-based order. To Beijing, such a rivalry has opened a complex window for power enhancement in global affairs vis-à-vis the United States.

Chinese nationalism has seen an immediate rise post the reduction in COVID-19 cases in China. This is visible in China’s responses towards the U.S., with Chinese state media outlets becoming overtly critical of the U.S., while praising the handling of the pandemic by the Chinese Communist Party (CCP).

The release of an animation video titled Once Upon a Virus by News China TV, mocking the U.S. response to the crisis, is one example. The nationalist newspaper Global Times, for its part, has published since February a number of provocative commentaries and opinion pieces dedicated to praising Xi’s response to the crisis, stories of China sending aid to virus-hit countries, and criticism of Donald Trump and America’s slow and mediocre response to the pandemic. The most recent of these was a May 9, 2020, piece titled “Blame game diminishes Western appeal to Chinese people.”

The general attempt by the Chinese media is to show that Trump, and not the U.S. as a whole, is against China. A commentary, titled “Trump casts doubt on trade deal, though his advisors call for enforcement,” promotes the ideology that, while Washington understands the importance of China, the Trump administration’s White House is keen on hurting China’s global image.

A subtle reflection of this is the Capitol Hill as a background picture in the published articles. This rhetoric adds to Chinese sentiments of support towards Xi, harkened as the first modern-age leader to strengthen U.S.-China ties amid blatant attempts by the U.S. President to stall China’s progress.

First, it helps the CCP consolidate its image among the Chinese people which has been damaged by its poor governance of the corona episode since the end of 2019. By attacking the United States, the Chinese media has successfully diverted the attention of the Chinese people from the mishandling of the pandemic domestically.

Second, provocative articles indicate the Chinese intent to strike a fight against the United States, contradicting its efforts to normalize tensions with the Trump administration. The attempt is to replicate a strong political posture for Xi Jinping as China’s top leader, equivalent to, or even better than, the American President. Such an assertion follows the rationale that China likes to draw comparisons of its leaderships, systems, and achievements. This is how the CCP has retained power for such a long period.

Third, engaging with the United States in a tug-of-war allows Beijing to exhibit to the outside world that there are no internal power struggles or political discontent inside China currently over the mismanagement of the pandemic. Post the 2018 constitutional change, dissatisfaction over Xi Jinping’s leadership and debate concerning his continuation as president has been suppressed. The corona episode further allows disciples of Xi Jinping to deflect the matter internally, at least for some time.

Technology as a Consequential Rivalry

China understands that a major reason behind rivalry with the Trump administration is the enhancement of Beijing’s technological prowess. China’s A.I. technology is more prevalent than the U.S.

This is not new, though. It was visible in the Obama administration’s foreign policy. The U.S. had tried to tighten China’s access to American technology, for example by preventing Chinese enterprises from investing in the U.S. semiconductor industry.

President Trump's coming to power also coincided with China’s rise in cutting-edge science and technology, which only harbored the ongoing tech war. This war involved U.S. trade sanctions against China, investment controls, controls on exports and exchange of technological personnel, and several other restrictions which have proven to be very detrimental for overall China-U.S. relations and global science and technology cooperation.

The American approach to Huawei under Trump has become strong and stronger. While the U.S. initially seemed to offer a “let it go” impression and allowed Huawei to play a part in setting  global high-tech 5G network standards, the latest move to block global chip supplies to companies like it comes as a tougher measure, striking the Chinese to retaliate at some point. The U.S. Commerce Department’s new rule greatly increases the scope to block the supply of chips to Huawei, handing a huge setback to the operation of this Chinese telecom giant. Not to forget, by early 2020, Huawei was already the world’s largest provider of 5G patents and commercial contracts.

In the field of electric vehicles too, even though China only joined in 2016, it is the biggest manufacturer, with more than 1.2 million vehicles sold in 2019.

Also, China feels it has more innovative technology platforms in the financial technology sector, which has boosted its economy’s structural and organizational robustness. China's “super app” ecosystem has created sustainable, circular digital earn-spend-pay business models, like Alibaba and Pinduoduo, for micro business owners, which have merged the business and consumer more than the U.S. ecosystem, which has been bogged down by sectoral regulations.

For China, the U.S. handling of COVID-19 has shown that technical expertise is of no use if it cannot be capitalized for the masses. So, despite having the best medical experts and sophisticated biotech companies, the U.S. has not been able to use them for public good.

Beijing’s response to the U.S. may have had a mixture of aggressiveness and subtleness during the pandemic at one level. Yet, it has not distracted the Chinese leadership from expanding its strategic outreach in the maritime-military domain, keeping its core interests and sovereignty claims in order.

The PLA, as the backbone of the party, has continuously engaged in military exercises in the regional pockets of the Indo-Pacific theatre, particularly in the South China Sea, even while the Covid-19 pandemic has raged on. Anti-submarine drills and Coast Guard exercises near the Spratly Islands and Paracel Islands only reflect the resoluteness of the Chinese military. Such exercises and drills display a national military preparedness to exploit the situation and take strategic advantage at a time when the United States is occupied with battling the pandemic.

This has implications for Japan and India, the two premier economies of Asia that are Quad partners of the U.S., along with Australia. Recent frequent appearances of Chinese Coast guard vessels in the Senkaku Island waters in the East China Sea are a grave warning to Japan that Beijing has not deterred an inch from its maritime territorial ambitions.

India too faces such Chinese adventurism along the India-China boundary. Recent skirmishes on May 5 between Indian and Chinese soldiers in Ladakh, and on May 9 in North Sikkim (ultimately resolved post communications between local commanding officers), also highlight Chinese border activism on land territories which have not lessened during COVID-19.

Further, Chinese state media outlet China Global Television Network’s recent tweet, claiming Mount Everest is located in “China’s Tibet Autonomous Region,” is another example of the same, and a blow to China-Nepal ties. China’s attempt at showing the whole of Mount Everest as its own is a furthering of both its claims on Tibet and its 5G installation plans on Everest.

Taking Advantage of the Pandemic

Strategic communities in China have always maintained that U.S.-China relations are intertwined in the changing geo-political environment, hence maintaining stable relations has become increasingly difficult. In such a background, Beijing has realized that the current global recession arising out of the COVID-19 pandemic could emerge as a significant game-changer in its strategic competition with the United States in just the way the 2008 global financial crisis contributed to its relations with Washington. In the Chinese outlook, the 2008 global financial crisis exposed loopholes of American soft power by revealing the drawbacks in the Washington Consensus model, originating from a capitalist world framework.

Likewise, COVID-19 is exposing the loopholes of the Chinese model of governance, which Beijing’s leadership needs to carefully handle in order to rebuild the CCP’s image and outreach ― both within and outside China. In fact, Chinese strategic communities have foreseen that COVID-19 might bring about a pivotal change in the current balance of power equation, noting that Beijing must stay alert for any economic and strategic eventuality. It needs to re-establish the brand image that China Inc. or the Beijing Consensus was trying to build all these years through the CCP’s economic success model.

Understanding such a multipronged complex Chinese response to the United States should not be missed in Tokyo and New Delhi. It is time for India and Japan to think afresh and note that China’s global strategy may be designed to respond to the Capitol Hill, but it will surely affect the long term interests of India and Japan in Asia and beyond.

Dr. Jagannath Panda is a research fellow and center coordinator for East Asia at the Manohar Parrikar Institute for Defence Studies and Analyses in New Delhi  and series editor for Routledge Studies on Think Asia. His most recent publications include Scaling India-Japan Cooperation in Indo-Pacific and Beyond 2025: Corridors, Connectivity and Contours (KW Publisher, 2020). Follow him on Twitter (twitter.com/jppjagannath1)

ALSO BY THIS AUTHOR: