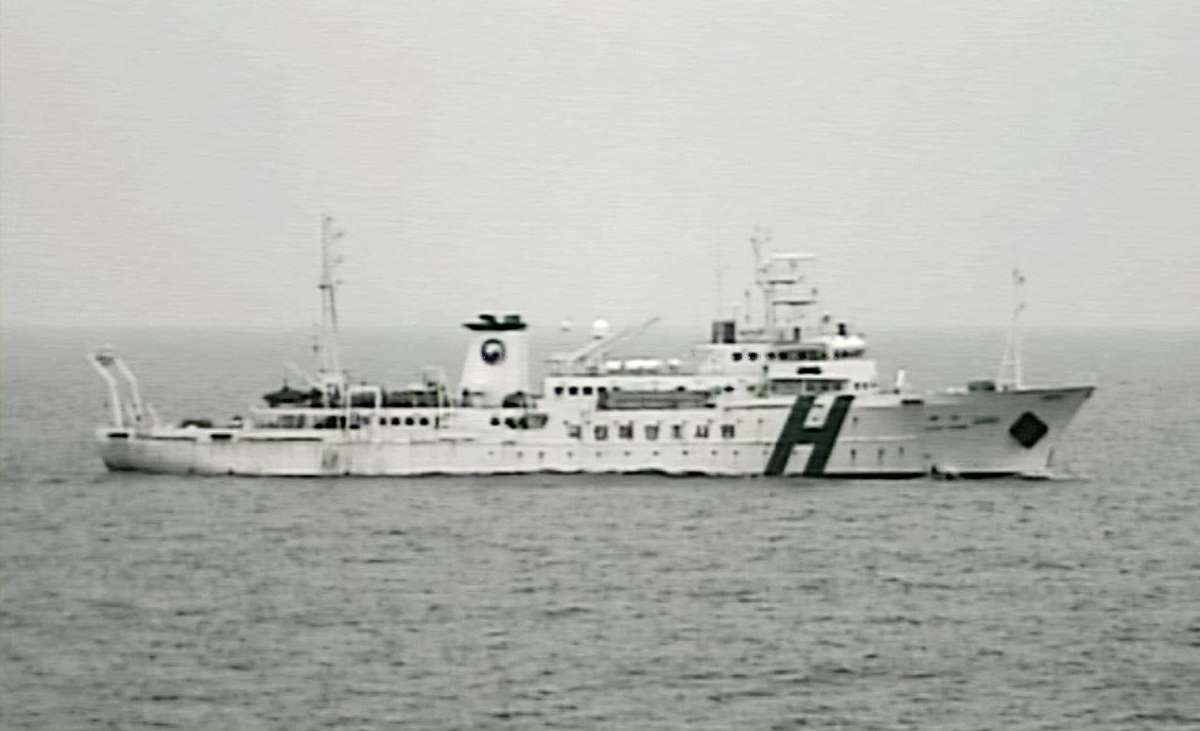 Speaking to reporters on Monday, May 30, Matsuno criticized the South Korean research activity as “totally unacceptable.”

Nonetheless, the 8th Regional Headquarters of the Japan Coast Guard confirmed that the South Korean ship appeared to be dragging a research cable through the waters inside Japan’s EEZ again that same day, May 30.

South Korea illegally occupies the Takeshima islands, which are part of Okinoshima, Shimane Prefecture. The development appears to have cooled hopes for a quick improvement in relations with the new South Korean administration.

Special envoys from Japan, South Korea, and the United States are scheduled to meet for discussions on North Korea in Seoul on Friday, June 3. The Japanese government is now considering whether to bring up the survey vessel issue at that time.

According to the foreign ministry, on May 29 the research vessel Hae Yang 2000 belonging to the Korea Maritime Institute (KMI) was discovered dropping a cable into the sea within Japan’s EEZ at a spot about 90 kilometers off Takeshima.

The KMI is a state-run institution and the parent group of South Korea’s Dokdo Research Center. Seoul calls the islands “Dokdo” and claims sovereignty over them.

Research vessels belonging to institutions operated by the South Korean government were also active near Takeshima from June 9 to 12. This was the very period when the inauguration of South Korea’s new president, Yoon Suk-yeol, was taking place, with Japan’s Foreign Minister Yoshimasa Hayashi in attendance.

A Japan Coast Guard official noted, “This behavior seems to contradict their professed desire for an improvement in Japan-South Korea ties.”

Under Yoon’s predecessor, Moon Jae In, Japan-South Korea relations reached what had been characterized as at their lowest point in the postwar period, marred by issues, such as wartime labor, comfort women, and the 2018 incident in which the radar of a South Korean naval vessel “locked-on” to a Japanese Maritime Self-Defense Force (MSDF) patrol aircraft flying overhead.

Nevertheless, hopes have been running high that bilateral relations might improve under Yoon, who indicated in May that he would emphasize relations with Japan. Prime Minister Fumio Kishida has also said, “We cannot wait to improve ties.”

Calls for a Vigorous Response

A government source says that the new South Korean leadership has apparently been oblivious to the likelihood that repeated operations by South Korean research vessels in Japan’s EEZ would go down badly in Japan and create doubts about the credibility of the South Korean side.

One foreign ministry official put it bluntly, “We shouldn’t harbor any illusions that the change of administration [in South Korea] will lead to a resolution of territorial issues.”

During his May 30 press conference, Chief Cabinet Secretary Matsuno stressed: “Takeshima is inherently Japanese territory, both in light of historical facts and international law. We will continue to strongly demand that the South Korean side take appropriate measures.”

However, South Korea also maintains that the waters in question are within its own EEZ, and it is not clear whether Seoul will accept Japan’s protests and demands.

During a joint meeting on May 31, members of the Liberal Democratic Party’s foreign affairs division and special committee on territories debated how Japan should respond to continued South Korean maritime research vessels intruding into Japan’s EEZ in the vicinity of Takeshima. Diet members in attendance made several suggestions, such as that Japan too should dispatch its own maritime research vessels to the area around Takeshima and take other new countermeasures.

At the same time, the Japanese government obviously would like to see Seoul-Tokyo relations normalized in order to better respond to the nuclear and missile developments North Korea is relentlessly pursuing.

For that reason, it will be keeping a cautious eye on the attitude of the South Korean side and remain open to working on various issues of mutual concern.

(Read the report in Japanese at this link and this link.)