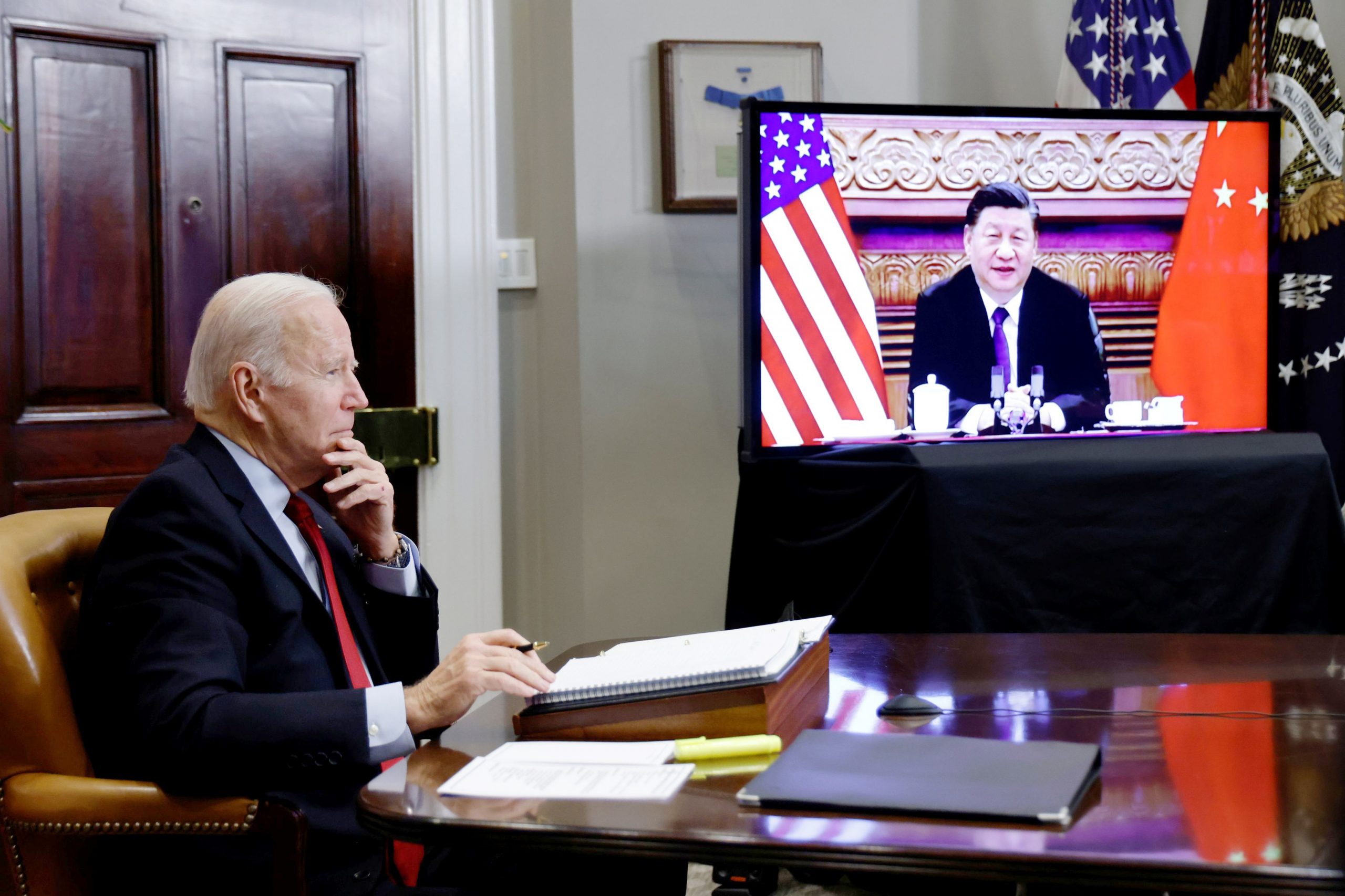 Joe Biden and Xi Jinping both gathered strong teams of supporters before they undertook their three and half hour marathon discussion, via video link.

Between them, these impressive men and women have a great deal of knowledge of China's politics, economics and its defense capability.

When Donald Trump spoke to China, many of his aides had far less experience of Asia.

Yet, as the official accounts of the call make clear, the Biden administration is taking a line on China which is just as robust as that of Mr. Trump and his hawkish advisors. The Americans continue to berate China on a range of issues, including trade and human rights.

The most pressing concern, according to security advisor Jake Sullivan, is China's military build-up.

The Pentagon claims that China will have a thousand nuclear warheads by the end of this decade and has also been testing hypersonic missiles, as well as investing in cyberwarfare.

Just a day before the call, the Southern Theater Command of the People’s Liberation Army, which supports forces covering the Taiwan Strait, said its navy had conducted a series of high-intensity bombing drills in the waters off the southern island province of Hainan.

During the call, President Biden voiced concern about such military activity. America's Democratic party, led by Mr. Biden, has a close rapport with Taiwan's president, Tsai Ing-Wen, who represents the Democratic Progressive Party.

Nevertheless, President Biden said the United States is adhering to the “One China” policy, which still recognizes Beijing as the sole seat of government in China. In return, Mr. Xi warned that anyone who supports Taiwanese independence is “playing with fire” and would “burn themselves.”

The other Chinese representatives who were involved in the call to Washington listened closely to their leader’s words. These included the Director of the Communist Party General Office Ding Xuexiang, Vice Premier Liu He, top diplomat Yang Jiechi, Foreign Minister Wang Yi and Vice Foreign Minister Xie Feng.

Those men recently led a Communist Party plenum, at which they praised Xi Jinping's strong leadership and assured him of their continued loyalty. A historical resolution was passed, which paves the way for Mr. Xi to remain in charge for many years to come.

According to quotes provided by the Chinese Foreign Ministry, during the call to Washington Mr. Xi said: “Anything done by a politician, whether merits or demerits, will be recorded by history.”

“In the next 50 years, the most important thing in international relations is that China and the United States must find the right way to get along. It is hoped that Mr. President will give full play to his political leadership and push U.S. policy towards China to return to a rational and pragmatic track,” said Mr. Xi.

In response, the U.S. side summoned up a new diplomatic metaphor. The Americans said that both countries should create “guardrails” to ensure that their competition does not veer into conflict. Mr. Xi agreed that they need to avoid derailing relations but implied that the problems are America's fault.

In the company of experts, I have spent some time discussing the call between the United States and China, looking for any significant developments or hidden messages. It is not an easy process, as in analyzing the conversation, we largely depend on the official accounts offered by each side, which aim to show their delegations in the best possible light.

Also, large parts of the call are still deemed as being secret, which makes it difficult to discern the full scope of the discussions. For that reason, we do not know if anything was said about Japan during the meeting. It seems unlikely. The only place discussed in detail appears to have been Taiwan.

Nevertheless, I think there is much from this call which provides useful information for Prime Minister Fumio Kishida, Japan`s new foreign minister Yoshimasa Hayashi and the economic security minister Takayuki Kobayashi.

The Biden administration made it clear it intends to be friendly towards Taiwan but does not plan to offer it diplomatic recognition, or coax it towards “independence.”

The Japanese government will aim to follow America's lead on the issue. China insists that Taiwan is its "core interest" and resents the United States and Japan from getting involved in what it regards as its internal affairs.

"Should Japan's economic security minister take a hard-line approach toward China and attempt to beef up cooperation with Taiwan, Beijing would carry out measures that may choke the Japanese economy."

I believe there is a sense of relief within the Japanese government that the call took place at all, and that Mr. Biden used lots of terms which are important to Japan.

He focussed on the idea of a free and open Indo-Pacific and reiterated how freedom of navigation and safety for aircraft are vital for the region's prosperity.

These are issues which are also of concern to Japan's major companies and trading houses, which have been supportive of Mr. Kishida.

It is possible that the new foreign minister Yoshimasa Hayashi will want to dial down the tension with China, in order to smooth the path for business. He was previously the chairman of the Japan-China friendship parliamentary group, which promotes good relations with Beijing. Upon his appointment as Japan's chief foreign envoy, he resigned from that role.

In speaking to the press, Mr. Hayashi has emphasised that Japan would “exercise leadership” in tackling global issues such as climate change.

Mr. Hayashi also said he would firmly face up to difficult issues in relations with China, South Korea and other neighboring countries, while making efforts to establish steady ties.

An agreement was reached during the summit call, which, if honored, will be significant for Japan.

National security advisor Jake Sullivan said the presidents discussed the need for nuclear “strategic stability” talks. The hope is that the negotiations could slow down the arms race, in which China is seeking to rapidly expand its nuclear arsenal.

However, I doubt Xi Jinping will concede much ground as he seeks to fulfill his pledge to give China a world class military. The acquisition of many more highly destructive weapons appears to be a requirement of his dream to make China strong in the face of its enemies.

Duncan Bartlett is a regular contributor to Japan Forward. He is the Editor of Asian Affairs and a Research Associate at the SOAS China Centre, University of London. He is currently teaching diplomacy and international relations for the Economist Executive Education course, `A New Global Order`.