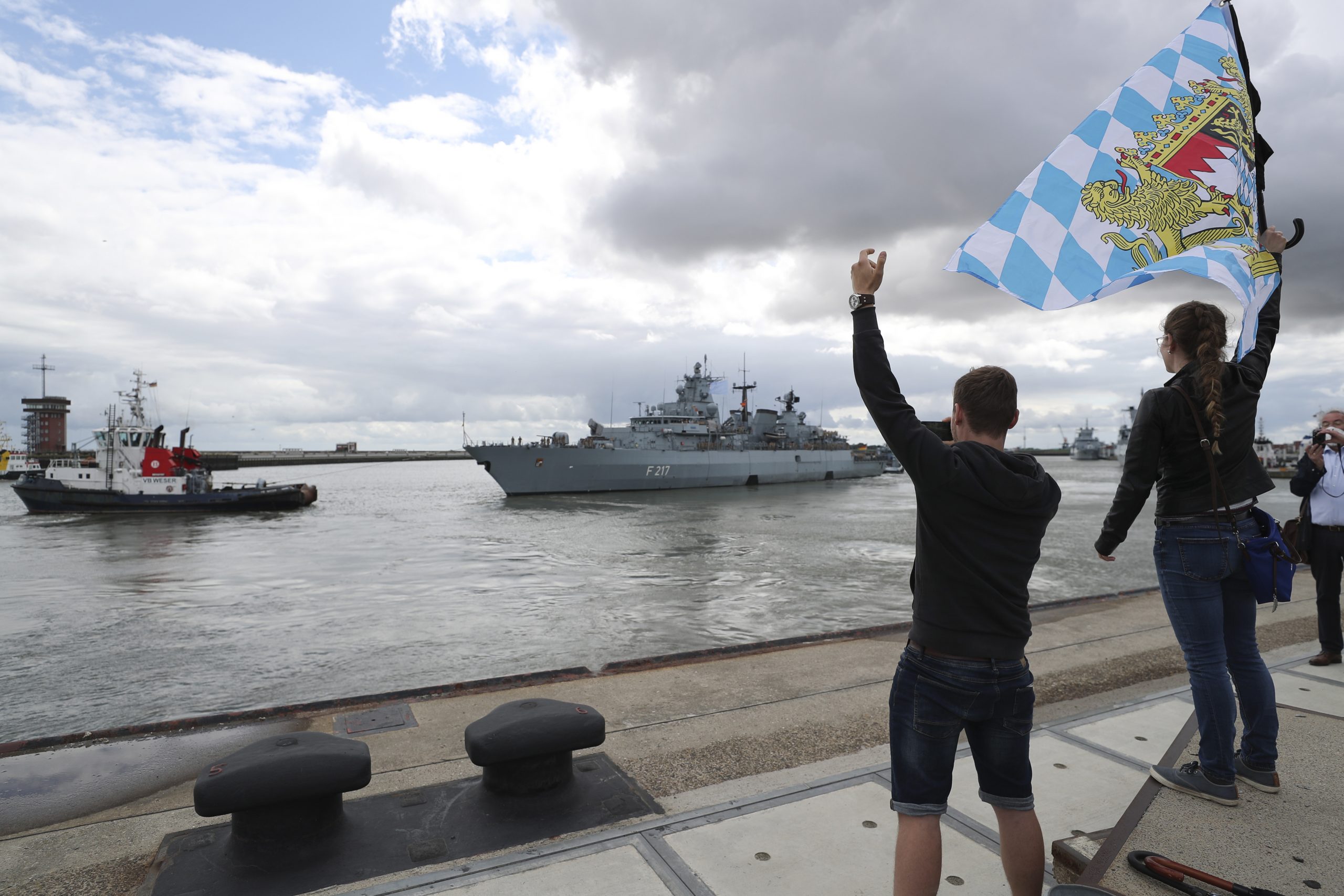 In this photo released by the Bundeswehr, well-wishers wave as Germany's naval frigate Bayern leaves the port of Wilhelmshaven, Germany, Aug. 2, 2021. Heading for the Indo-Pacific region, the crew will be underway for more than six months. (Nico Theska/Bundeswehr via AP)

The port call to Japan was the first by a German navy vessel in about 20 years.

The call follows the German government’s adoption of policy guidelines on the Indo-Pacific in September 2020, and the strengthening of Germany’s role in the region.

Meanwhile, the Japanese government is keen to reinforce its ties with Germany – a major European nation that shares the same values – and keep China, a country in the midst of hegemonistic activity, in check.

“This port call shows Germany’s determination to contribute positively toward peace and stability in the Indo-Pacific region. It is an important turning point,” Kishi said.

“The Bayern will return home via the South China Sea. We want to promote the fact that Germany and Japan are working together toward freedom of navigation,” Ambassador Goetze added.

Defense cooperation between Japan and Germany has progressed considerably since the start of this year. In March, the two countries signed an agreement on the security of information, designed to share military secrets and prevent leaks.

In April, the first “two-plus-two” teleconference involving the foreign and defense ministers of the two countries took place.The Bayern’s port call on November 5 follows these Japan-Germany developments earlier in the year.

“We have gained a foothold in terms of additional defense cooperation,” Kishi said enthusiastically.

The security of the area surrounding Japan is attracting global interest. In May, France’s Jeanne d’Arc training fleet arrived in Japan and in September, the British aircraft carrier HMS Queen Elizabeth visited the country as well.

The reinforced presence of major European countries in Japan is standing out.

However, at the same time, Germany has strong economic ties with China, and its stance is that “ultimately, Germany aims to maintain a balance on the China issue.”

In fact, regarding the Bayern’s dispatch in the Indo-Pacific region, the frigate had initially planned to visit China as well.

Nevertheless, it is thought that the Chinese government rejected the idea of the Bayern making a port stop at Shanghai.

The Bayern has been involved in joint exercises with the JMSDF since November 4 in the southern waters of the Kanto area.

“Germany’s behavior could be a sign they are going against China’s wishes,” said a source close to the Japanese government.