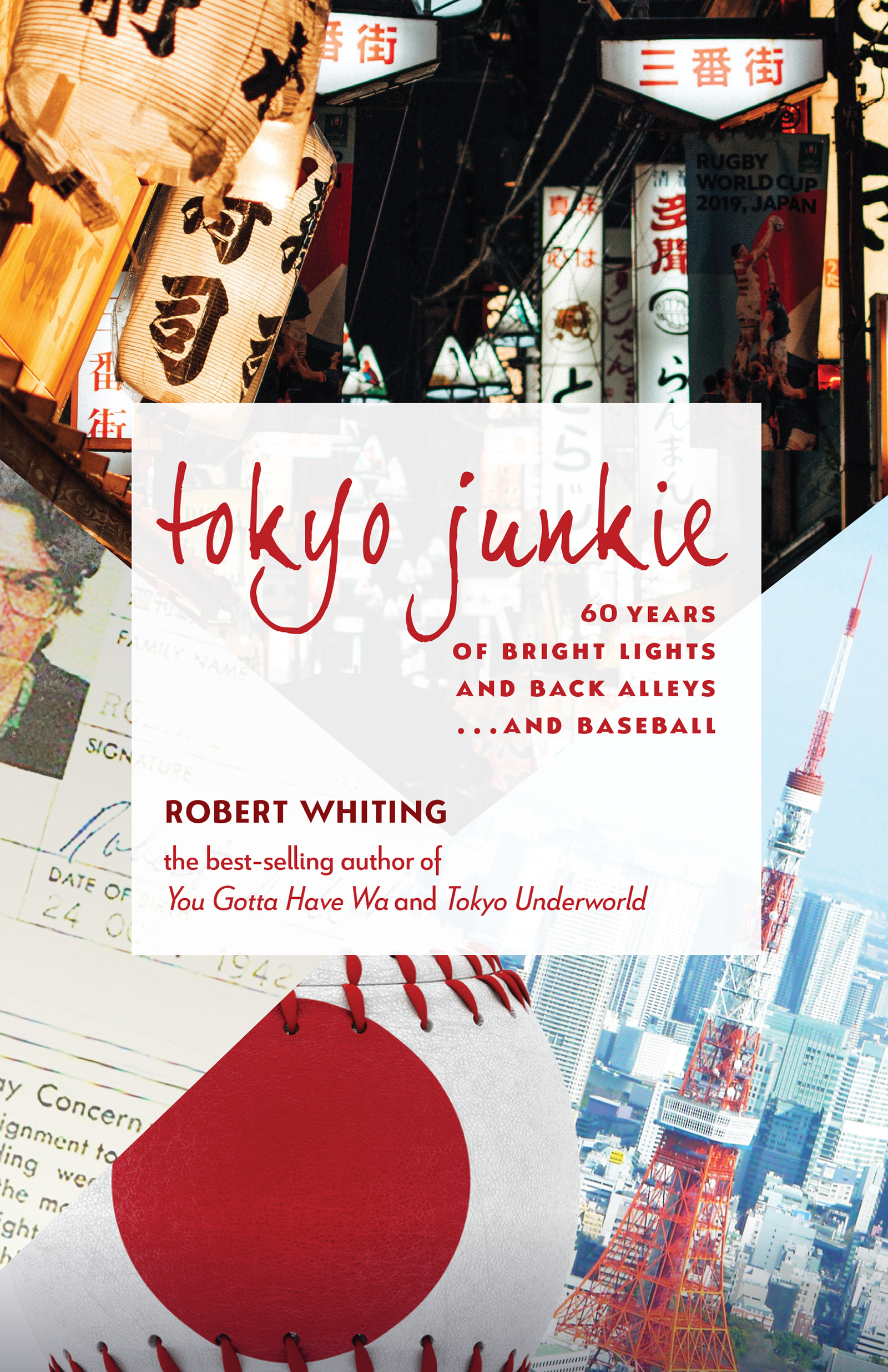 When the Empire of Japan surrendered to the Allied powers in 1945, there followed a massive invasion of the Japanese islands euphemistically called an “occupation”. Through the Korean and Vietnam wars and to the present day, millions of American servicemen have cycled through Japan.

Many of them stayed. The lure of safe voyeurism and privileged debauch —underwritten by the power of the dollar and the prostrate humiliation of a defeated country—proved too much for thousands and thousands of GIs to resist. Japan became to the United States what Algiers was to France: a place for experimenting with the exotic in a setting resembling a petting zoo.

Robert Whiting came to Japan in 1962, a nineteen-year-old novice in military intelligence assigned to Fuchu Air Station with the United States Air Force. Despite Whiting’s assessment of Japan as a “a third-world, disease-ridden backwater,” he made the astonishing decision to remain and has made Japan home for most of the intervening six decades since then.

Whiting is world famous as the author of best-selling books and widely-read articles in the popular press about Japanese baseball, Japanese politics, and the Japanese underworld, among other aspects of modern Japan.

In Tokyo Junkie, Whiting’s most recent book, we learn about the life behind the bestsellers. Tokyo Junkie is Whiting’s autobiography, but it is more than that—it is the story of how Whiting’s favorite city, Japan’s kaleidoscopic megalopolis, has changed over time, and how one American has changed along with his adopted town.

“Tokyo grew right alongside me,” he writes in the Preface. Tokyo Junkie is a spooling variation on this central theme.


The Past In Full

To Whiting’s credit, he doesn’t paper over the racist, misogynistic ugliness of the postwar past. Some of Whiting’s military compatriots in the early years held deeply disturbing views about Japan: Japanese women were “slope-headed” and had “slanted” genitalia, some Neanderthals in khaki pointed out to Whiting. Because Whiting showed interest in Japan and was even learning to speak Japanese—a language that GIs apparently referred to as “shit”— Whiting was inevitably called a “Jap-lover”. Americans who strayed from the usual tourist circuits also sometimes got earfuls of stereotyped insults from the Japanese side.

One might have thought the day had passed when American sojourners could write with open simplicity, as Whiting does, that “a favorite sport among foreign men was the exchange of stories about quirky encounters with Japanese women.” But old habits die hard. The early postwar was a messy, very human working-out of new geopolitical realities, and Whiting provides a historically valuable first-hand account of what the mixing of peoples looks like at the level of the street bar and the two-bit cabaret, especially through the eyes of a privileged conqueror.

Whiting’s interest in Japan kept him in the country long after other adventure-seekers had left. For a time, Whiting’s interest went too far in the wrong direction. His youthful carousing in izakaya and hostess clubs eventually devolved into a prolonged flirtation with the demi-monde, where he noticed that Koreans and Okinawans dominated much of the mob violence. Prostitution and human trafficking were rampant, and the yakuza controlled much of that, too.

His descent into what he calls the “abyss” of being a mob impresario threw him for a loop, and he eventually left his desk job in Tokyo working for Encyclopedia Britannica and went to New York City for a season to clear his head.

But even in America Whiting couldn’t forget about Japan. He spent his Manhattan days in cheap apartments and grimy watering holes, working on the manuscript that would become The Chrysanthemum and the Bat (Dodd, Mead), the 1977 classic study about Japanese baseball and the cultural tributaries to the game.

Following the success of The Chrysanthemum and the Bat, Whiting returned to Japan and became a go-to writer and commentator on all things baseball, and more. Whiting used his writerly persona to revisit his fascination with organized crime, but this time at a distance, interviewing notorious mobsters of various nationalities and collating the best (or, more accurately, worst) of the tales in Tokyo Underworld (Constable, 1999), and sundry magazine articles. More books about baseball, such as You Gotta Have Wa (MacMillan, 1989), The Meaning of Ichiro (Grand Central Publishing, 2004), and The Book of Nomo (E-book, Japanime Co. Ltd, 2017), also appeared.

Whiting has also written widely about politics, focusing in particular on the yakuza ties with the Liberal Democratic Party (LDP), the dominant party in Japan for most of the postwar. While much of this has been revealing, some soi-disant Japan specialists in Whiting’s wake have taken his Godfather motifs a bit too literally. Tokyo Junkie, it is hoped, heralds the waning of the fraternity-row view among many so-called Japan hands that everything you need to know about the LDP boils down to Yoshio Kodama and Nobusuke Kishi.

Kodama was an unsavory fixer and mobster whom the CIA paid to bust up opponents to the postwar security arrangement between Japan and the United States. Kishi—the grandfather of former prime minister Shinzo Abe—was imprisoned on trumped-up “war criminal” charges under the same rotten postwar system that spawned Kodama’s crossover mobland- democracy career. Younger reporters and self-styled “scholars” have taken Whiting’s affinity for the underworld as a truism and continue to produce articles and even books based on the theory that the LDP is basically the yakuza in less gaudy attire. Surely one cannot hold Whiting responsible for embarrassing excesses such as these, however.

There is a dark side to politics in Japan, to be sure, like everywhere else. Whiting’s longevity is a testament, though, to the difference between getting caught up with gangsters in Tokyo and, say, Hong Kong, Moscow, or New York. Whiting wrote a tell-all book about the yakuza and has lived to enjoy decades of royalties. Those who portray Japanese politics as an epiphenomenon of the Sumiyoshi-kai are working in the same, safe postwar bubble which is a function of Japan’s ongoing status of supplicant to Washington.

It should be remembered that Whiting’s first real introduction to the mob was on the silver screen— his hobby of watching gangster flicks and the related fare of samurai slashers being shared by Prime Minister Abe. One gets the sense that, of Whiting’s present-day emulators and Abe himself, one side never quite escaped the boyish conflation of gangland movies with real life.

Whiting’s various other pronouncements about politics should be seen as couched in the same Foreign Correspondents Club of Japan context of baked-in foreign prejudices about Japan. For example, Whiting repeats, without citation, the Japan-hand favorite that Japan massacred 300,000 “men, women, and children” in 1937 in Nanjing. (Whiting’s recounting that in postwar Japan American GIs interpreted “R&R” to mean “Rape and Revel” somewhat undermines his critical position on the subject.)

He also mocks former Tokyo governor Shintaro Ishihara, with whom Whiting clashed in person and in print, for daring to question the Chinese Communist Party-manufactured narrative.

Whiting further cites the Reporters Without Borders’ World Press Freedom Index—which JAPAN Forward’s Dr. Earl Kinmonth has shown to be an utter work of fraud— as though it were reliable information. With “Jap-loving” friends like this, one begins to see how English-language reporting on Japan is so crabbed with dezinformatsiya.

Here one feels, as though running one’s fingers over Braille, the unmistakable pattern of Whiting’s friend and former English conversation student, Tsuneo Watanabe, the tycoon of the Yomiuri Shimbun (which Whiting rather humorously portrays as “conservative”. To be fair, though, I agree with Watanabe’s assessment of the hapless Asahi as the “Akai (Red) Shimbun”).

Watanabe’s impassioned hatred for the scandal-plagued LDP, especially former prime minister Eisaku Sato, is notorious. It is but a short walk from Watanabe’s lucubrations to the theory that Japanese politics boils down to mob rule. He shows that not all American stereotypes of Japan were imported.

There is a great deal of other stereotyping still to work its way out of Whiting’s worldview. “The organizational gene in the Japanese DNA” and “I began to suspect the presence of an apartment-cleaning gene in Japanese women” are statements which Whiting’s self-styled progressive supporters may or may not be willing to vouch for. Nonetheless, Jeff Kingston, who in one of whose edited volumes appears to reference a “bone-pointing witch-doctor” from a “primitive Australian tribe,” has written in praise of Whiting’s work.


A Two-Bagger Book on the Postwar

All in all, Tokyo Junkie is notable in passing as an unambitious, confessional tale of coming of age, professionally and politically, in a foreign country. Vignettes of sixty years of history, from Japan’s defeat to economic triumph, and then again through the horrors of Fukushima and the Chinese coronavirus, are on offer.

Whiting has known baseball stars, wrestlers (both the sumo and mask-and-Speedos varieties), politicians, media moguls, mafiosi, con artists, journalists, and countless average Japanese people. He writes about them all with the immediacy of experience and even, at times, compassion, barely veiled by an ironical pose.

Whiting bet his whole life on Tokyo, and Tokyo richly rewarded him. Tokyo Junkie is the story of that life, rooted in the privilege of a conquering nation. In its prejudices and its human negotiations, Tokyo Junkie tracks the very story of Japan’s postwar.

Title: Tokyo Junkie: 60 Years of Bright Lights and Back Alleys . . . and Baseball

Learn More about the book: On the publisher’s website, here.

To buy the book: Several options are available through Goodreads, here.