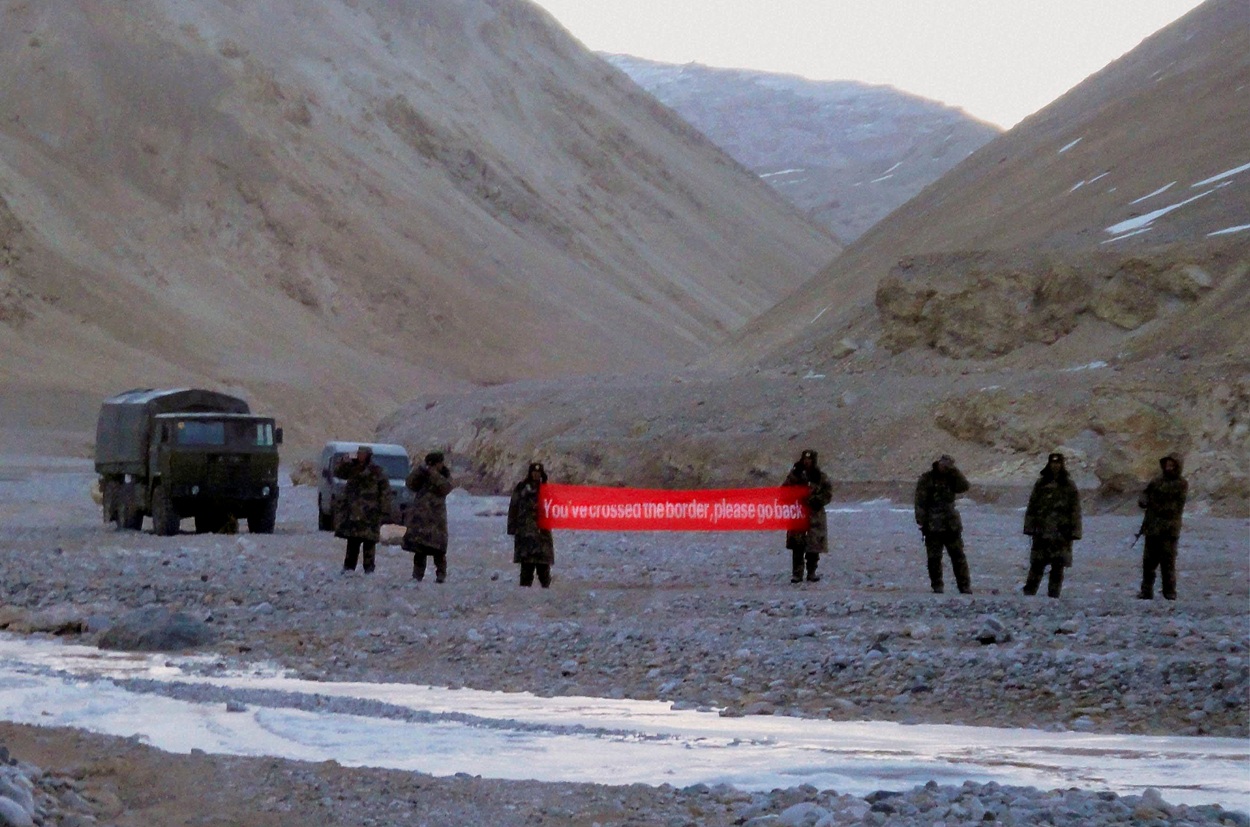 China yet again has intruded inside the Line of Actual Control (LAC) in India’s Ladakh sector. It has placed about 5,000 soldiers and armored vehicles within its side of the Indian-perceived disputed border.

Xi Jinping appears to have timed it brilliantly. The entire world (including India) is grappling with a one-of-its-kind pandemic caused by the novel coronavirus, which originated and epicentered in Wuhan (China) and spread globally from there, causing unprecedented deaths and economic devastation. Meanwhile, China has clearly wasted no time in swiftly exploiting the situation to consolidate its control and sovereignty claims in the South China Sea, and now in the Ladakh sector of India’s larger Jammu and Kashmir region.

Need for Clear-headed Understanding of the Reality

Commenting on this incursion, former Indian Army Chief Bikram Singh said: “It is a tactical issue that has occurred…. Let us not start drawing deductions in the strategic domain.” Singh perhaps needs to revisit and study Chinese statecraft and its methodology to geopolitics and geostrategy in a more informed and astute framework.

In fact, this seems to be a perennial problem with the “army’s thinkers” in India who unfailingly miss the forest for the trees. The message from China to India is entirely strategic, and now has been put into operation tactically — contrary to what the former chief of Indian Army seems to have gathered.

Given its now established centrality to the evolution and nature of the India-Pakistan deterrence relationship, Beijing has evidently begun resorting to political manipulation of geographic realities and alteration of the strategic future of the sub-continent, all to its own tune.

The latest Chinese offensive needs to be read and absorbed in terms of geo-strategic vitality and complementarity vis-à-vis the Depsang Plains. The 255-kilometer Darbuk-Shayok-Daulat Beg Oldi road axis is being used by India to develop the airfield at Daulat Beg Oldi. This airfield is located just eight kilometers as the crow flies, south of the Karakoram Pass.

The Daulat Beg Oldi airfield to Karakoram Pass stretch holds indispensable strategic stakes for India. The road access to the Indian airfield at Daulat Beg Oldi is a target for the PLA, as the LAC runs parallel to this road further towards the east.

Clinching the Karakoram’s south would allow China to reach the Siachen Glacier from the Depsang corridor towards meeting at the Tashkurgan junction — where Pakistan’s China-Pakistan Economic Corridor (CPEC) crosses into Gilgit-Baltistan. Most importantly, the Chinese coming behind Siachen Glacier will render the Indian Army’s positioning in Siachen untenable. And, therefore, the latest Chinese violation is not, and cannot be, merely a “tactical” ploy in isolation.

The canvas has the words “strategic caution” written in bold all over it, for those who can read.

How China Got Here

Following the war with India in 1962, China negotiated and obtained a boundary settlement on the Karakoram with Pakistan. This settlement was finalized in March 1963. With it, China obtained for itself a new boundary.

China secured the Shaksgam Valley, and this pushed the Chinese territory further south towards Jammu and Kashmir. The remarks of Pakistan’s former chief of Army staff, Mirza Aslam Beg, on the impact of the Siachen conflict on Pakistan point towards this complicity when he stated, “India had foiled Pakistan’s attempts to have a common border with its ally China…[for which] Pakistan had in the past ceded territory in Karakoram to China, in order to realize this objective.”

The prominence of geopolitics in the policy chosen by a state, and the strategy it adopts to obtain those policy objectives, cannot be minimized. The actions of China and Pakistan in the Karakorams, in the past, and presently too, illustrate this precisely.

As it turns out, the latest Chinese ingress episode finds itself rooted in enhanced interactivity between politico-military-strategic and operational issues, by virtue of, most prominently, the CPEC — a part of China’s grandiose Belt and Road Initiative (BRI), which seeks to consolidate the China-Pakistan strategic relationship. The spate of these developments with China is adding newer variables to the regional deterrence milieu, as I have argued in my writings on the subject for more than a decade.

Recurring Chinese transgressions in the border areas in India’s northeastern and western theater are part of a plausible military strategy to keep both fronts concurrently active and build pressure on the Indian Armed Forces. This advertently places the existing conventional deterrence equations in South Asia under considerable strain.

India has been pushed towards confronting the growing complexity and pressures as it strives to ensure continuing and survivable deterrence at varying levels. The presence of China and Pakistan (more so courtesy CPEC-BRI) will progressively compel India to do more in planning and achieving deterrence at operational levels.

China’s Territorial Revisionism Along the CPEC and BRI

The CPEC corridor comes off as the latest variant of the longstanding China-Pakistan partnership and collusion. Launched in 2015, the CPEC runs through Pakistan in a linear fashion, linking northwestern China to southern Pakistan’s Arabian Sea coastline through a network of roads, rail, and pipelines. Upgrades to the CPEC, and the latest inching forward well inside the Indian perceived LAC by the PLA in Ladakh, are critical indicators of China’s intentions to consolidate territorial control.

As far as regional geostrategic calculations are concerned, the CPEC has emerged as a vital lynchpin among the variables of deterrence that India will seemingly have to cater to, ranging from conventional deterrence in the Indo-China border areas to campaign planning for developing flexible deterrent operations, including joint operational planning.

The CPEC begins in Kashgar (China) and subsequently passes through the 1,300-kilometer-long Karakoram Highway (Pakistan’s National Highway 35/N35), with 887 kilometers falling inside Pakistan and 413 kilometers inside China. Heavy infrastructure investments in and around the Karakoram Highway have rendered China integral to the changing realities of the Southern Asia deterrence framework.

Across the LAC, the Chinese PLA in the Tibet Autonomous Region is known to have created a blitzkrieg of military infrastructure throughout Tibet, which is connected by fiber optic communication extended towards military installations along the Indian border. When military regions are inter-connected through secure communications, it in turn ensures enhanced real-time command and control — which would be a requirement for China’s military in times of any future border conflict.

Xi Jinping’s centennial vision for the Communist Party of China in 2021 accentuates military diplomacy as the key pillar to China’s overall foreign policy strategy along its periphery. In the future, Beijing will be seen applying Chinese power and influence effectively over determinants that promote its overall influence along its periphery, in support of a long-term strategic foreign policy agenda which pivots around territorial revisionism.

The spectrum of threat has become far more complicated and challenging for India — especially when it comes to maintaining a deterrent capable of surviving vis-à-vis the contemporary China-Pakistan equation.

This time could also be utilized to ponder upon the deliverables, if any, of the grandstanding put on display during the “Wuhan Spirit” and “Mahabalipuram Summit” between India and China, touted by a few as the turning point in Sino-Indian relations.

Other Recent Articles on Border Disputes  with China: