Rights advocates roundly condemned in a recent symposium the violations being committed by China in Baluchistan, the biggest of the four provinces of Pakistan.

Speakers revealed the forced evictions, arson, and other forms of oppression that the Pakistani government allegedly allows Chinese investors to commit.

“China’s influence is expanding, as are the number of human rights violations. Such tyranny is inexcusable,” one speaker said at the International Symposium on Asian Peace and Human Rights held at the Diet Members’ Office Building in Tokyo on May 26.

Organized by the Kuretakekai Asian Forum, the event was attended by approximately 250 people. 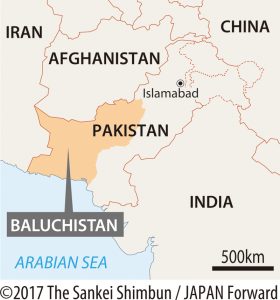 The number of Chinese companies entering the Pakistani market has significantly increased due to the “One Belt, One Road,” the New Silk Road Project being promoted by the Chinese government.

China’s is particularly interested in Baluchistan due to the latter’s location, adjacent to the Arabian Sea. By promoting port and harbor development, as well as infrastructure maintenance, the Chinese will be able to secure an exit from the Xinjiang Uygur Autonomous Region to the Arabian Sea.

“The Pakistani government is preventing journalists from reporting on the situation of Baluchistan,” said Mr. Suleman, grandchild of the former Khan of Kalat. “The Chinese are not being welcomed in Baluchistan. People feel their survival is being threatened and are strongly against colonization.”

He appealed to the international community for understanding and cooperation, “to protect their resources and native language.”

Munir Mengal of the Baloch Voice Association touched on the fact that Pakistan is rich in underground resources, such as gold. “Those kinds of resources are being continuously plundered by the Chinese. The Chinese are building the road, but their only concern is to reap as much as they can,” he said.

“China is attempting economic and military domination of the entire region. They are trying to take over using the nuclear missiles, something which Japan does not possess,” he added.

Uygur representative, Tur Muhammet, spoke of the assimilation policy underway in the Xinjiang Uygur Autonomous Region: “In 1949, the Chinese (Han ethnic group) comprised 4% of the population, yet now it has increased to 50%. Population planning has resulted in a reduction of between 5-8 million Uyghurs. Between 300,000 and 500,000 unwed women were forcibly removed by the Chinese.”

He criticized the Chinese government for allegedly prohibiting the use of Uygur language and enforcing severe restrictions upon the practice of Islam.

Mr. Olhunud Daichin, who is involved in investigating human rights problems in the Inner Mongolia Autonomous Region, also spoke. “During the decade of the cultural revolution, [the Chinese government] murdered more than 30,000 people, just for the ‘crime’ of being Mongolian. Moreover, these are Chinese government figures, so the actual number of people killed is much higher.”

Mr. Daichin is currently preparing to apply for World Heritage registration of the South Mongolian site, where the Chinese massacred Mongolians during the cultural revolution.