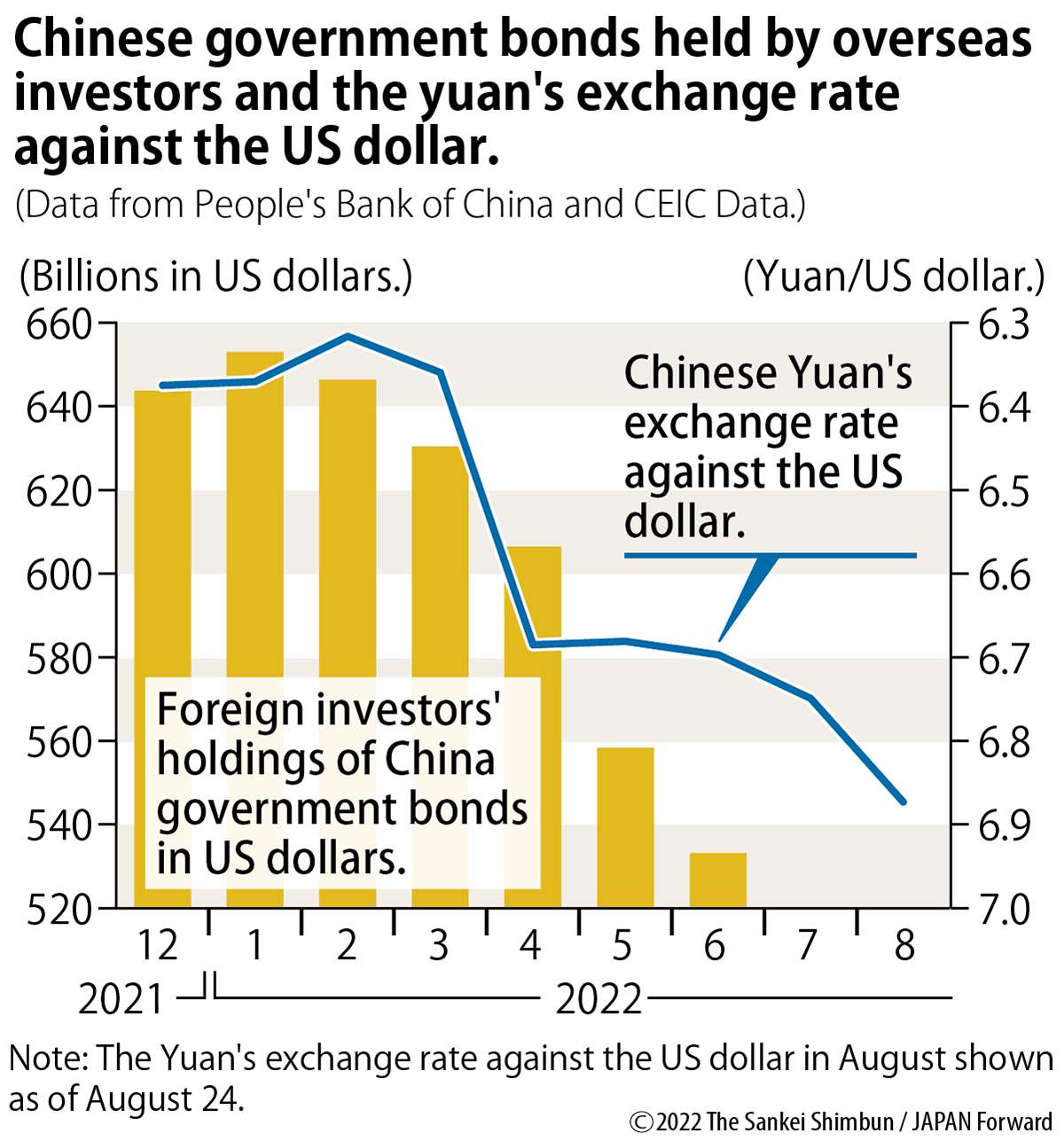 The Chinese renminbi (yuan) is continuing to weaken against the United States dollar. The direct cause is attributed to overseas investors selling China’s bonds and capital flight, which could lead to a financial crisis.

A look at the bar chart shows the US dollar value of foreign investors’ holdings of Chinese bonds since December 2021. The change in the Chinese currency’s exchange rate against the dollar is superimposed in the blue line.

Most of the Chinese bonds indicated on the left hand scale are corporate and local government bonds issued by real estate development companies and others. Most are denominated in yuan. The exchange rate on the right side of the scale indicates yuan’s depreciation against the US dollar at the lower end and its appreciation at the upper end.

Both Chinese bond prices and yuan values have been falling simultaneously since February of 2022. In June, foreign holdings of Chinese bonds decreased by about $120 billion USD from January.

A look at what’s behind the trends is instructive.

On February 4, Chinese Communist Party General Secretary and President of the People’s Republic of China Xi Jinping, and Russian President Vladimir Putin met at the Beijing Winter Olympics, where they agreed, “Friendship between the two States has no limits, there are no ”forbidden“ areas of cooperation.”

On February 24, Russian troops launched a war of aggression across the Ukrainian border. In response, the United States, Europe, and Japan immediately imposed financial and other sanctions against Russia. The US also notified China that it will apply secondary sanctions if China supports Russia.

The fear of a second round of sanctions against China and the widening gap in interest rates between the US and China both increase the risk of investing in securities in China, including bonds and stocks, inviting a pullback in investment.

The widening interest rate differential between the currencies of the two countries alone will lead to further weakening of the yuan. This is because foreign investors will pull out their interests as the dollar value of yuan-denominated securities declines with the weaker Chinese currency.

What, then, is the net investment of foreign investors in Chinese bonds on a monthly flow basis, i.e., purchases minus sales? The graph is presented as a balance.

According to the Institute of International Finance (IIF) in Washington, values have continued to fall since foreign investors sold off $30.7 billion USD in Chinese bonds in March. Through July, the total outflow had reached $83.6 billion USD.

Foreign investors’ actions are based on their rational judgment regarding investment returns. It is safe to assume that large Chinese investors, the majority of whom have vested interests, would agree. Whether they are family members of officials of the Chinese Communist Party or not, they want to secure profits. If they find it unfavorable to invest their assets in the Chinese market, they will find a gap in the government’s capital controls and move their assets overseas.

That would be illegal capital outflow or capital flight peculiar to the Chinese system. But what is the scale of this outflow?

According to China’s official statistics, the current account surplus, including trade, in the first half of this year amounted to $169 billion USD. The People’s Bank of China should have captured this surplus and added it to its foreign exchange reserves. However, its foreign exchange reserves have decreased by $179 billion USD during the same period.

This means that there was a total outflow of $348 billion USD. Capital outflow includes legitimate outward investment permitted by the authorities. Still, if one were to extrapolate from the movements of foreign investors, capital flight should account for a significant portion.

What’s in store next for the US dollar- Chinese yuan exchange rate? Lockdowns under China’s zero-tolerance COVID policy may have had an impact. Lockdowns were implemented in Shanghai and other cities in May and June. Economic stagnation under those actions may have an impact.

There are more significant factors. These include the prolonged war in Ukraine, the further widening gap of the US-China interest rates due to a further rise in US interest rates, and the heightened risk of collapse in China’s housing bubble.

China’s government and the People’s Bank of China have been unable to take fiscal and monetary measures to counter the falling housing prices and the slump in real estate development investment that has continued since early 2021.

By comparison, the US FRB was able to fight back and avoid a major recession with a massive quantitative expansion of dollar funds after the collapse of Lehman Brothers in September 2008. That collapse, too, was triggered by the bursting of the housing bubble.

In contrast, China’s unique monetary and financial system makes similar action impossible. The People’s Bank of China would issue additional yuan funds in response to the size of the increase in foreign exchange reserves, but the reserves have continued to decline significantly.

The only remaining option is to devalue the yuan to improve the advantage of manufacturing in China. On the other hand, this would further accelerate capital flight and the withdrawal of foreign investment in Chinese securities.

The yuan’s devaluation in the summer of 2015 triggered a surge in capital flight. This time, China could further sink into a financial crisis and general state of economic turmoil.

According to the August 25th morning edition of The Sankei Shimbun, Honda and other companies have begun to consider exiting China for their parts supply networks. Considering the growing China risk, the entire industry should rethink its dependence on the Chinese market.