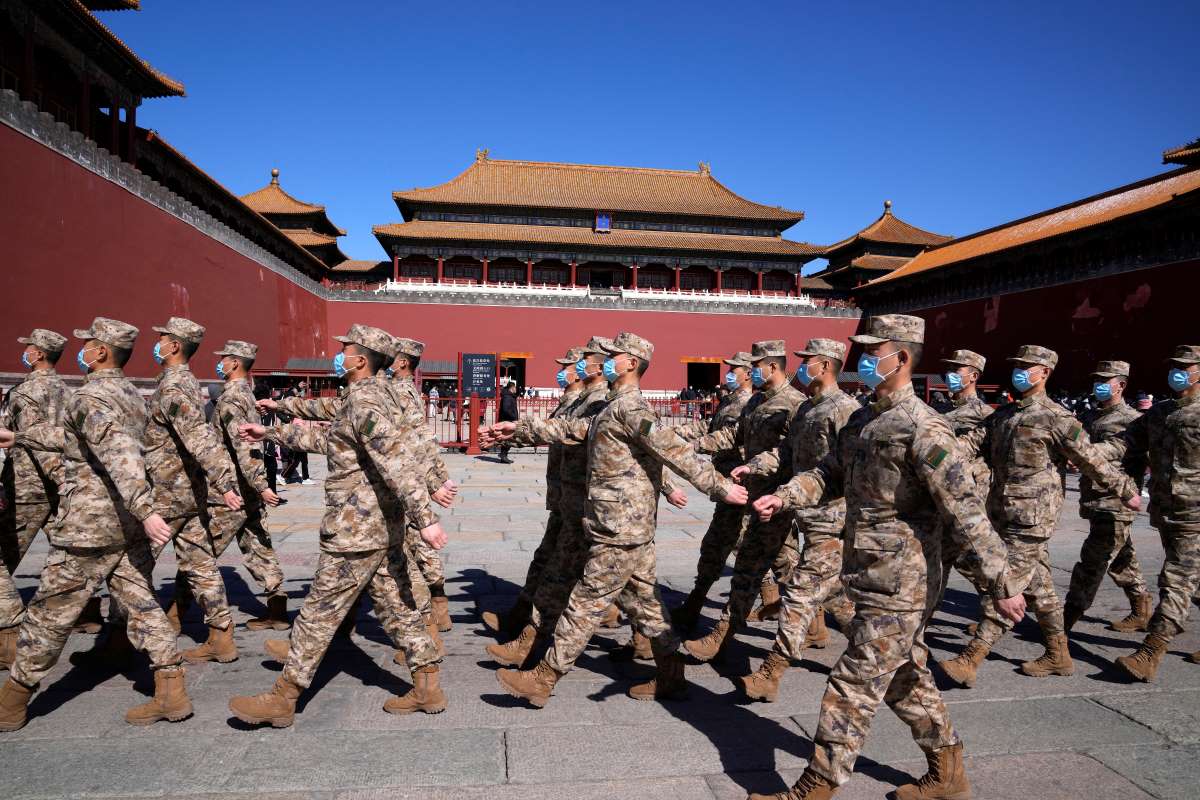 Chinese soldiers walk in formation outside the entrance to the Forbidden City in Beijing, as the Chinese Communist Party's National People's Congress begins on March 5, 2022. China is raising its defense spending in 2022 by 7.1% to $229 billion, up from a 6.8% increase the year before.(AP Photo/Ng Han Guan)

Japan's defense is changing, and bigger defense budgets and capability improvements are on the way. Exactly when this will occur is unclear, though Japan's Prime Minister and other officials usually note, "within five years."

By Japan standards this is lighting speed. However, the Chinese threat that has concentrated Japanese minds on national defense is perhaps coming at a much faster speed.

And once the 20th Chinese Communist Party (CCP) Congress takes place on October 16, a conflict in East Asia may arrive soon enough — and long before the contemplated improvements in Japanese defense capabilities. Japan may indeed find itself in the position of having to fight with what it has, not what it would like to have.

Why the Upcoming CCP Congress Matters

This is the first CCP Congress since Mao's era that will solidify the position of a Chinese leader who can take China to war ー and who probably will do so if current trends remain as they are.

Put simply, this CCP Congress is putting China on the path to war. These gatherings are always "rubber stamp" sorts of affairs, but this one looks to set Xi Jinping in power indefinitely ー without any real restraints. His opposition is marginalized, if not thoroughly cowed or imprisoned.

The groundwork has been laid and the dirty work done. It's not as if previous Chinese leaders have been nice guys, but Xi is the first one to combine the capability to go to war with the messianic desire to do so ー if he can't get what he wants via intimidation. He sees himself as a man of destiny who will restore China to its rightful place in the world.

People's Liberation Army (PLA) capabilities have developed to the point the Chinese Communist Party leadership (and Xi in particular) believe China can conduct a short, sharp war (or maybe even a long, sharp war) near its borders and succeed.

Taiwan is the most likely target, and such a war will not be a tidy four-day affair. The effects will be felt worldwide.

China has spent the last 45 years or so developing economically and building up its military. It's been recovering from the wretched Mao era.

But now Xi Jinping is likely to "roll the dice" and see what he can get by force and intimidation.

However, as noted, wars are unpredictable. And at minimum, besides taking heavy casualties, war would make China's economy take a huge hit as its foreign trade shrinks. So will its access to essential foreign exchange, as China (and Chinese) become pariahs in the civilized world.

In China for the last 45 years there's been a sense that things will keep improving. Those days may be coming to an end. Life is going to get much harder for most Chinese.

As for the Rest of the World?

Unless the United States, Japan, and other free nations simply roll over and let China have its way, one expects the world to break up into two main blocs: the free world and the unfree world.

It will look like the old Cold War era, but with actual fighting for some length of time. Global institutions will either collapse or be irrelevant ー though it may not be a bad thing if the free nations set up their own institutions.

What Becomes of the US-China Relationship?

If Xi does take China on the warpath (even if just against Taiwan) the US-China relationship will revert back to what it was in 1950. Any sort of bloodshed involving US forces and/or US partners (such as Japan) inextricably changes the relationship for the worse.

Normal relations just are not possible once this happens.  For how long? Why not try a decade, at a minimum?

The apologists and appeasers in the United States (of whom there are many) will have to crawl back into the woodwork while claiming, when asked, that they were always "tough on China."

One irony is that, if the PRC and Xi Jinping had continued their "charm offensive" of the 2000's, they would probably have gotten everything they wanted and without fighting.  But like a fat man at the buffet table who spots a fresh tray of chocolate eclairs, they just couldn't help themselves. As a result, in the last several years, the United States ー and even the Japanese and the Europeans ー have kind of woken up to the PRC threat and are starting to take measures to defend themselves.

Did they wake up soon enough? Probably not. But that's usually the case with democracies. An upcoming fight will be harder than it had to be.


Too Pessimistic About the Future?

Some observers claim that once Xi consolidates his power and control he will seek to improve relations with the United States, and that China will become less threatening. I wouldn't bet on this. More likely, he sees his opportunity to push and he will take it.

He has been going about "sanctions-proofing" China's economy and financial system, and also exerting total control over the population via the "zero covid" crackdowns. Or, in effect, conditioning the public to hardships.

China has been stockpiling food and fuel, and building coal-fired power plants (it has plenty of coal) at breathtaking speed.

Chinese Communist Party officials have also been ordered to sell their own and their relatives' overseas holdings and bring the cash back to China. And of course the PLA build-up continues unabated.

It seems that Xi is battening down the hatches and getting ready for a fight.

The Biden administration appears to lack resolve, and Xi might agree with that assessment. He just might be thinking "the time is right."

What Must Tokyo Do?

So Tokyo will do well to take what it has defense-wise and make the best of it.

And after 60 plus years, ensure that Japanese and American forces can fight together. This too requires little money or hardware. Indeed, emulate and expand what the JMSDF and the US Navy have quietly achieved over a number of decades.

For Japanese and US leaders, a changed mindset is the main thing, and then getting down to business, and fast.