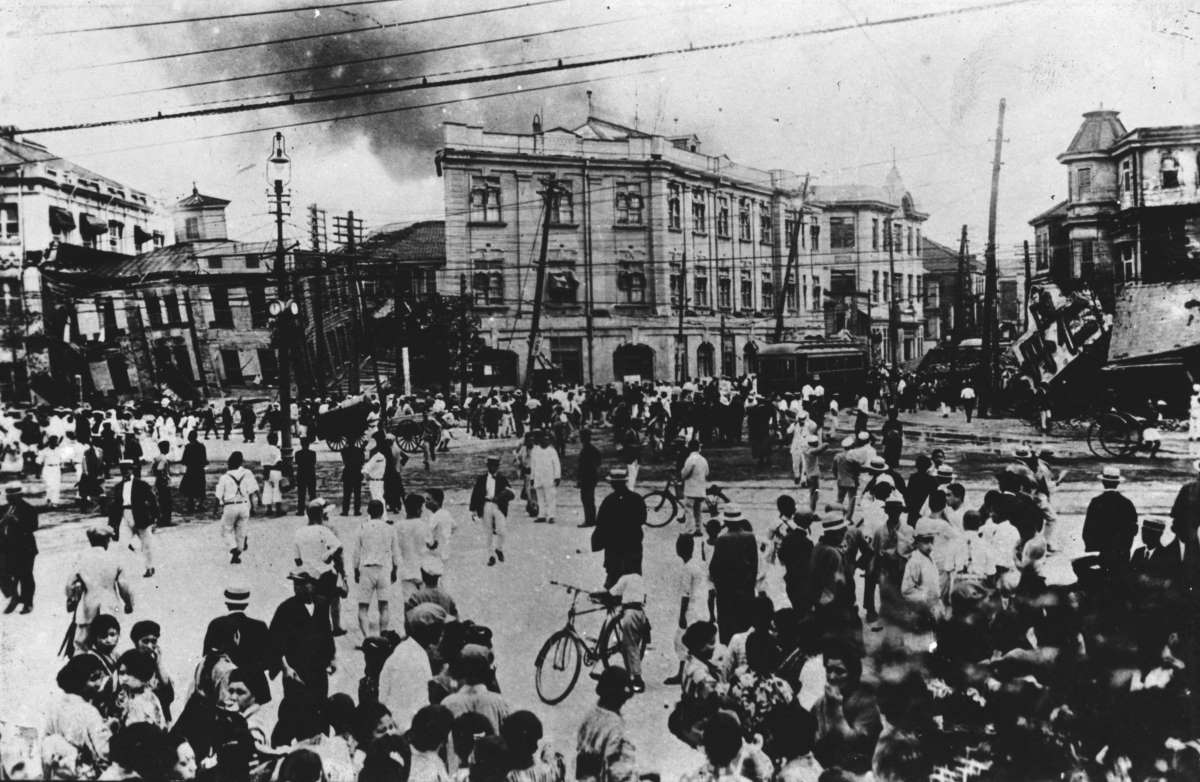 This photograph is taken near the Hibiya intersection in Tokyo where many buildings were destroyed and burned in the Great Kanto Earthquake in September 1923.

2023 marks the 100th anniversary of the Great Kanto Earthquake of 1923. It was an event that left approximately 105,000 people dead and missing.

It was the worst natural disaster to hit Japan in modern times, a combination of a 7.9 magnitude earthquake with its epicenter in the southern Kanto region and strong winds caused by typhoons.

The frequency of threats to lives and livelihoods from weather disasters is also increasing. Events such as heavy rains, extreme heat, and severe cold waves — which occur "once in several decades" or "beyond anything we have ever experienced" — have become regular occurrences. Reports say the cause is due to the intensification of weather conditions caused by global warming.

Lessons from the Great Kanto Earthquake

In order to survive in this "age of catastrophes" due to intense and compound disasters, we should draw on the lessons learned from the Great Kanto Earthquake. Lessons from that event will guide us to strengthen disaster prevention measures for today.

The cold wave that swept through Niigata on Christmas 2022 caused heavy snowfall that stranded a large number of vehicles in the prefecture. It is frightening to imagine what would have happened if a major earthquake had struck under such circumstances. There is no doubt that evacuation and rescue operations would be much more difficult.

When multiple natural disasters occur simultaneously or in rapid succession, they can cause tremendous damage that is far greater than in the case of a single disaster.

Hitting about lunchtime, the Great Kanto Earthquake caused fires that were fanned by strong winds from a typhoon centered over the Sea of Japan. The combination created a fire whirlwind that swirled flames like a tornado.

The risk of such a complex disaster is extremely high in Japan today. We must recognize that a combination of torrential rains, earthquakes, and volcanic eruptions is "highly possible."

It would be impossible to be perfectly prepared for every possible combined disaster. However, the risk of combined disasters can be minimized by thoroughly preparing for earthquakes, tsunamis, and floods.

For example, we should not put off taking earthquake-proofing and fire-prevention measures for our houses. Reconfirm that your furniture is secured. When heavy rains are expected, evacuate before the rains intensify.

It is important to reexamine the disaster prevention measures that have been taken to date. Moreover, we need to strengthen preparedness, keeping in mind the compounding risks.

Learning to be Proactive

The Great Kanto Earthquake was so devastating in terms of fire damage that the full extent of the damage is not well-known.

Of the 13,000 victims of the earthquake from causes other than fire, 11,000 died from collapsed houses. That is twice as many as were killed directly by the Great Hanshin Earthquake.

In addition, Sagami Bay and the eastern coast of the Izu Peninsula were hit by a tsunami of up to 10 meters or more minutes after the earthquake. Also, many landslides occurred in Hakone, Tanzawa, and other areas. It is estimated that 200 to 300 people were killed by the tsunami and 700 to 800 by the landslides.

In Shimoda and other areas on the Izu Peninsula that were hit by the tsunami, the human casualties were smaller in comparison to the number of houses swept away. That was thanks to the experience of the 1703 Genroku Earthquake and the 1854 Ansei Tokai Earthquake.

Let us remember the importance of making our houses earthquake-proof as much as possible. Moreover, we need to bear in mind the importance of being aware of possible disasters that may occur in our own communities.

September 1, the day of the Great Kanto Earthquake, was designated as Disaster Prevention Day in 1960. Since then, evacuation drills and educational activities have been conducted on the assumption that another major earthquake could occur.

There are other opportunities to learn about and prepare for earthquakes and tsunamis,. For example, "1.17" (Great Hanshin Earthquake) "3.11" (Great East Japan Earthquake and Tsunami) and "World Tsunami Awareness Day (November 5)."

An equivalent day should also be set aside for floods and other weather-related disasters. June 1, Japan’s Meteorological Day and the beginning of the rainy season in the archipelago, is a good candidate.

Global warming cannot be stopped immediately. Yet we need to minimize be reminded of the risk of compounding weather disasters, which are likely to continue in the future. We should establish a day ー separate from Disaster Prevention Day ー to provide an opportunity for the public, government, and local communities to work together in preparation for weather-related disasters.