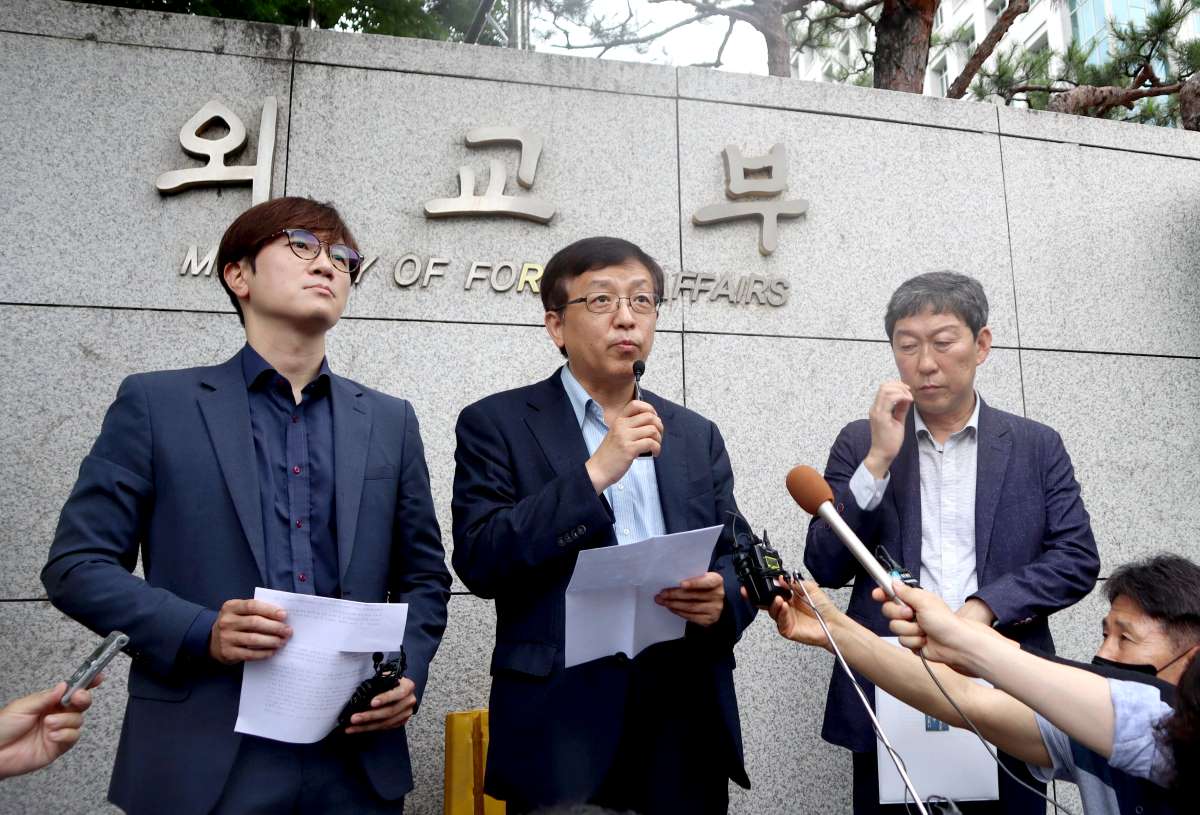 Attorneys for South Korean plaintiffs responding to reporters' interviews before the first meeting of the public-private council to resolve the wartime labor issue on July 4, 2022, in front of the South Korean Ministry of Foreign Affairs (photographed by Tatsuya Tokiyoshi.)

A South Korean public-private consultative body has been established to discuss solutions to the problem of the so-called Korean wartime laborers lawsuit in which the South Korean Supreme Court ordered Japanese companies to compensate the war era South Korean workers. Dismissing a 1965 international agreement between Japan and South Korea, the court’s decision has further aggravated bilateral problems.

The consultative group, which first met on July 4, is composed of South Korean government officials, lawyers, and experts.

President Yoon Suk-yeol’s new administration says it is keen to improve Japan-Korea relations. In particular it would like to find a way of resolving the pending wartime workers lawsuit and the acrimony it has created between South Korea and Japan. However, none of the proposals that have surfaced so far would come close to providing a solution.

The South Korean side plans to complete its work by August and says it would then like to hold talks with the Japanese side. Japan’s unwavering position, on the other hand, is that all outstanding wartime problems and compensation claims were fully resolved between the two countries under the 1965 treaty on basic relations and agreement on settlement of claims between South Korea and Japan.

The issue is therefore not bilateral, but one which the Yoon administration should focus on resolving domestically within South Korea.

According to media reports in South Korea, one solution being considered is the establishment of a voluntary fund of approximately 30 billion KRW ($22.7 million USD) to be provided by Japanese and South Korean companies and individuals. Japanese companies that are defendants in the lawsuit would be excluded.

Under the scheme being considered, the fund would reportedly be used to pay compensation to the plaintiffs in the South Korean lawsuits.

Another proposal that has also been floated, according to the report, is a subrogation scheme in which the South Korean government would initially shoulder the compensation payments and later request future payments from the Japanese side.

The plaintiffs have objected to these proposals, saying “they would exonerate the perpetrators,” and demanded that the Japanese companies named in the suit pay the settlement in out-of-court talks.

But the responsibility for this problem lies with the runaway South Korean judiciary and the ineptitude of the administration at the time.

In 2018, the South Korean Supreme Court made an unorthodox decision against international law by unilaterally denouncing the 1965 Japan-South Korea Agreement, a promise between the two nations, and ordering Japanese companies to pay compensation in violation of its terms. The Moon Jae-in administration left the issue unresolved, citing “judicial independence” as the reason.

The plaintiffs are in the process of seizing the assets of the Japanese companies and monetizing them through sales. If the South Korean Supreme Court confirms the order to liquidate the assets, Japan is prepared to impose sanctions. This is perfectly understandable.

For Yoon, the issue provides a great opportunity for his administration to demonstrate that Korea is a member of the international community which shares the values of democracy and rule of law. This would also highlight the differences compared to the Moon Jae In administration.

In that case, first of all the country should demonstrate both at home and abroad that South Korea is a country where international norms prevail.