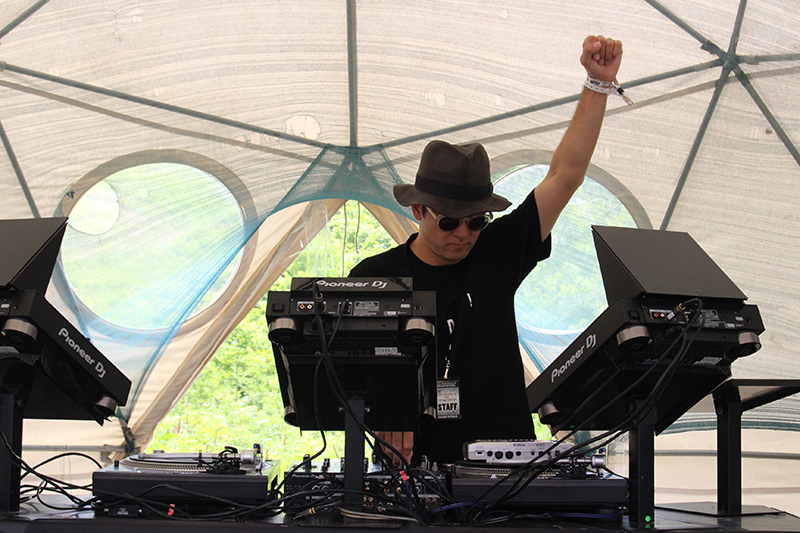 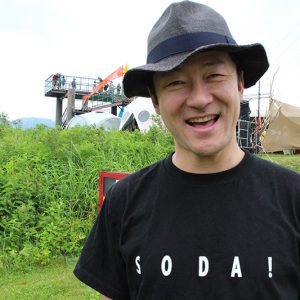 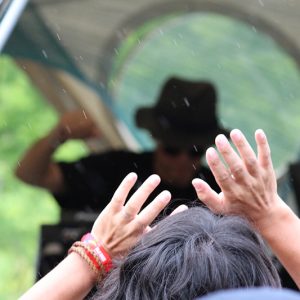 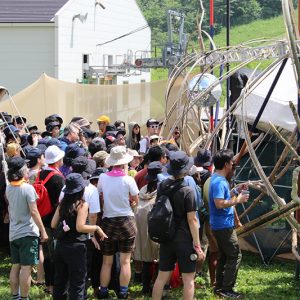 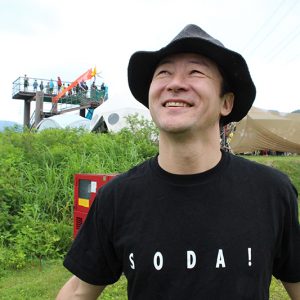 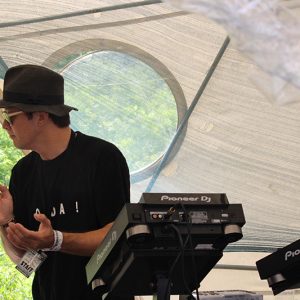 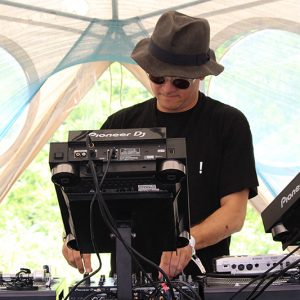 Known best for his acting work in Japanese cult classic movies like Ichi the Killer (as brutal enforcer Kakihara) and Hollywood blockbusters such as Marvel’s Thor trilogy (as Thor’s buddy and Warriors Three member Hogun the Grim), Tadanobu Asano is also an accomplished musician.

His no-wave punk band SODA! has built up a loyal following. On Friday, July 26, at the Fuji Rock Festival 2019, he indulged his love for old-school techno music with a lunchtime set under his own name.

Asano played a set of deep techno for those brave enough to endure the gondola ascent to the remotely-located Day Dreaming stage. The venue had a DJ booth housed within a stage made of curved bamboo strips and tarp, with a mirror ball hanging in front.

His homemade tracks were comprised of very hard and heavy beats and a minimal droning melody, making for an aggressive lunchtime wakeup. Some tracks were all rhythm, high-tempo trip-outs of electronic snare and percussion. Any time the bass did kick in, it was carried off far into the mountains without echoing back.

After his set, Asano spoke with JAPAN Forward about his musical aspirations and how he balances his music with his day job as a Hollywood star. Below are excerpts of the interview.

How did you put together your set today?

All of the music is homemade on my Yamaha QY100 sequencer. I made the music in several different patterns, and then tried them in different configurations, until I had a specific set in my mind. Then last night I put those together properly, and that brings us to today.

How do you decide how best to configure the songs?

Well, the sequencer includes various different sounds, and I usually make techno, so I work within that genre. The tempo is relatively slow, but that’s always been my style.

Fans have to be extremely determined to come to see you in this remote location, far from the rest of the festival.

This area is remote, but it feels comfortable here, and the air is fresh. So people who know about this area are interested to check it out.

What are the challenges in building a dance music set at 1 P.M. in a remote location? How do you make people dance when they’ve only just woken up?

People should do what they like. I don’t mind. If someone doesn’t want to dance, there’s no point in forcing them to dance. I always have fun, and that’s enough for me. It’s wonderful if the audience enjoys it too and if they want to dance, but I don’t try to force it.

Your mix of movie star, punk musician, and electronic music creator is a rare combination, and we’re interested in how those various roles affect each other. For example, your presence as an actor must help you to reach a wider audience as a musician, right?

Sure. I hope people will listen to my music for what it is, even if they know me mainly as an actor. It’s all the same Tadanobu Asano. I used to keep my activities as an actor and as a musician separated, but now I see it all as one. I hope that fans of my acting work and fans of my music can all have fun together, and I hope to bring over more and more open-minded fans to my music.

Your music comes from the margins, with the punk of SODA! and the techno of your solo work. Does it worry you that fans of your movies may find it inaccessible?

Yes, it could be bewildering — at least SODA! is a band, which is easier to grasp. But the techno music I was playing today is not so straightforward. It’s not what you might expect from a celebrity who plays music, which might confuse people. But hopefully that will make for a really good shock!

Has SODA! been active recently?

Yes. Recently, rather than releasing albums, we are releasing one new song each month on Apple Music, Spotify, and so on — digital only. We have recorded nine new songs and we are rehearsing some more to prepare for recording, so we’ll keep putting those songs out once a month.

As an actor, sometimes I have busy periods on a film shoot, and the other band members have other responsibilities too. It’s different than a band of young musicians who are just starting out, because all of us in the band have our own jobs already.

Young musicians will set aside a proper schedule to go on tour and so on, but we don’t have that kind of time, so we had to consider new ways to get our music out there. By releasing one song a month, we can maintain regular activity in a manageable way. We’ll play concerts when we have time to do so, but when I’m busy filming we can at least release new music on a regular basis for our fans to listen to.

All musicians put on a little bit of an act when they stand on stage — they play a role that is not their everyday self. As an actor, do you feel like you’re playing a role when you’re on stage as a musician?

How about the other way around? Does your music work ever affect your acting?

Do you perform music live overseas?

Yes, SODA! has done some shows in Taiwan, and I played my techno set in South Korea, and some other shows like that around Asia. One day I’d love to play in Germany, where techno music is so well-loved. I’d like to put some thought into making that happen.

How did you get into making techno music?

When I was 22 or 23, rave parties were starting to gain popularity in Japan — very small rave parties in the mountains, like today’s show. I loved it. In those days it was all techno and trance and so on. So I bought some music equipment and started to make my own. Those rave parties were the start.

You are a rare example of a Japanese actor who has found success in Hollywood. That must be a handy calling card for you as a musician, right?

Yes. I have a lot of friends who play in punk bands, and sometimes I’ll go to their concerts as a regular audience member, and I sometimes get asked, “Hey, aren’t you in Ichi the Killer?” That movie appeals to fans of punk music, so they get excited about it. Earlier today at the hotel, there was a Korean musician who was like, “Asano-san! From Thor!” It was nice that he’d recognized me from that movie.

So now that your lunchtime set is over, you are free for the rest of the day. Will you be looking around Fuji Rock?

I’m going to just hang out for the rest of the day and eat some good food. I’ve been to Fuji Rock several times, and the food court has really evolved — you can get some very good meals served with Niigata Prefecture rice, so I always look forward to that. I love how Fuji Rock offers so many different stages, each with their own concept, like how the Field of Heaven is completely different from the Green Stage, so you can spend the whole day exploring the site. And then in the nighttime a different side of the festival comes to life, which is so much fun too.