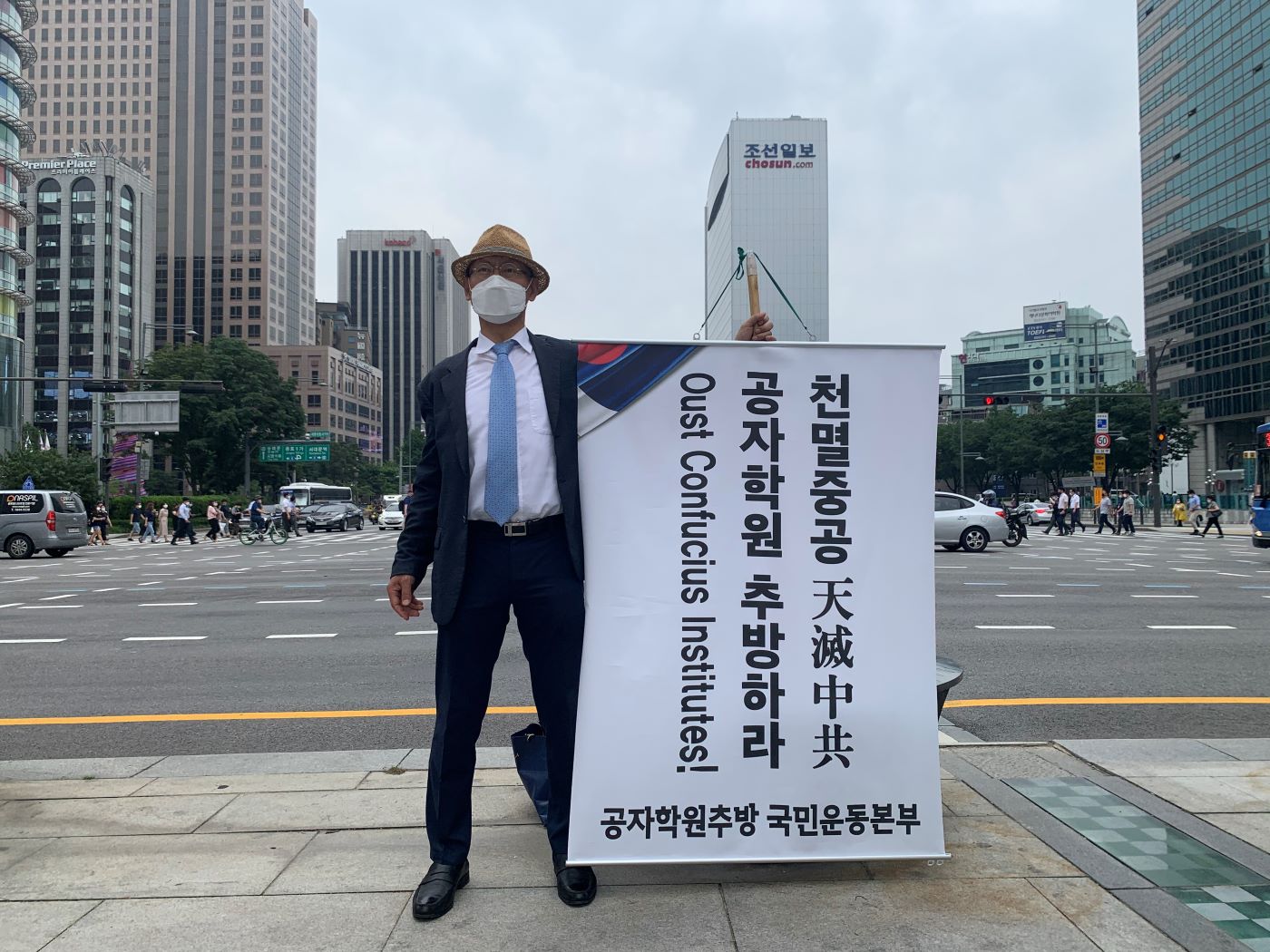 As Xi Jinping cements his unprecedented third term as China's paramount leader, significant readjustments in the power structure and more draconian control are ensuing each day. Xi's re-election, however, has profound implications beyond the realm of realpolitik, including on China's foreign influence operations.

Beijing's assault on core democratic values and attempts to foist its standards and principles onto others have taken on another dimension since Xi took office in 2013. There have been harsher crackdowns on civil liberties and human rights. And those who have dared to challenge the Chinese Communist Party (CCP) guidelines — Liu Xiaobo, Ilham Tohti, and Chen Jieren, to name a few — have paid a hefty price.

Academic freedom is also at stake. Students, scholars, and educational institutions are often pressured to self-censor and refrain from expressing particular views. This practice has been exported extraterritorially through meticulous and covert means, explains former director of South Korea's Ministry of Culture, Sports and Tourism Han Min-ho.

Until 2021, Han was a senior public servant with 25 years of service. Today he is the current chair of Citizens for Unveiling Confucius Institutes (CUCI). JAPAN Forward recently sat down with him in an exclusive interview to discuss his perspective on the effects of China's foreign influence in liberal democratic societies.

In the interview, Han notes that he now manages the largest anti-CCP civic group in Korea. He says the group is determined to eradicate Confucius Institutes from the country.

Seoul established the first international CI in 2004. And now the country currently hosts 38 of them throughout the Korean Peninsula — the largest number in Asia . Nor is Japan a stranger to this controversy. In July, Hyogo medical school closed its CI after the Japanese government cautioned about its potential spy and propaganda activities. But unlike Japan and many other democracies, South Korea (Korea) has remained adamant in preserving these learning centers.

This is the story of a man who abandoned his robust career to participate in what is undeniably a David and Goliath fight against a bonafide "Giant."

Why did you decide to leave your old career?

Frankly, I got canned from my old position for criticizing then- President Moon Jae In and his administration for executing backward-looking and impractical policies.

Notably, I reprimanded them for stoking anti-Japanese sentiment and pushing outrageous nuclear power plant agendas. I could have remained a bureaucrat or accepted other lucrative offers. But I was called for the more pertinent task of defending my nation from China's "sharp power" invasion.

You used the term 'sharp power' invasion. Can you elaborate further?

Obviously, I don't apply it to mean physical domination. But it is an ideological and political inference by China in liberal democratic states. More specifically, it refers to the CCP's use of apparent soft power, like the Confucius Institutes. These are a façade to mold our public opinion to align with that of Beijing while debilitating our traditional norms and values.

Why choose to be an anti-CCP activist?

In the recent decade, I sensed a significant shift in Beijing's behavior towards South Korea. Their interference in our domestic affairs became increasingly bold and audacious. China's blatant opposition to South Korea's THAAD missile deployment, attendance at the NATO summit, and potential inclusion into the Chip 4 and QUAD alliance readily demonstrate my point.

Truly problematic was our government's submissive responses that jeopardized Korea's sovereignty and national security. It became undeniably conspicuous that former President Moon and his party, in particular, had intentions to appease the Chinese Communist imperium. Even when it meant abandoning our traditional allies. Moon, in fact, openly voiced his wishes to nurture the 'Chinese Dream' along with other Asian states in his speech delivered at Beijing University in 2017.

I genuinely feared South Korea was moving towards a socialist state with China as our godfather. Shaken to my core, in the summer of 2020, I took to the streets of Gwanghwamun for a one-person protest calling for obliterating Chinese influence in the [Korean] Peninsula.

How do 'sharp power' invasions work?

The Central Committee of the CCP cultivated what's known as the United Front Work Department (UFWD) since the early 1940s. It is responsible for coordinating domestic and foreign influence operations.

Using various tactics, including coercion if need be, the UFWD and its affiliated organizations seek to:

One of their central roles is to mold international opinion favoring China and its policies. And this requires a sophisticated network in the government, mainstream media, public and private sectors, and urban and rural communities within the targeted state.

China's favored means of achieving this is money and power. Pour cash until the target budges. If they don't, use coercive measures. There's a reason why I refer to China as a "bonafide mafia state."

What is the most successful 'sharp power' invasion in South Korea?

The most successful case in South Korea is the proliferation of the Confucius Institutes. I call them a propaganda machine of the Party. Li Changchun, a retired Chinese politician and an ideology czar, once praised CIs as "an important part of China's overseas propaganda setup." I don't doubt his words in the slightest.

There are 22 CIs in Korean universities and 16 in high schools. And some of the former have established China-specific libraries and research institutes to go alongside. Most prominently, Seoul National University and Yonsei University, two of our elite schools, erected a Xi Jinping Collection Room in 2014 and a Yonsei Charhar Center in 2019, respectively.

How does the arrangement work?

What's troubling is that South Korean schools sign MOUs with Chinese counterparts, wherein they are contractually obligated to obtain clearance from the CI headquarters for any courses taught or materials used at the center. Also, most contracts include a clause where host institutions are solely liable for any defamation against the CI. And any such acts may cause the agreement's termination.

Because Chinese students make up the largest number of international students in South Korea, our schools are financially dependent on them and will avoid damaging ties with China at any cost.

CIs in South Korea are over a decade old and thus deep-seated. The fact that anti-Japan and [anti-] American research and seminars are repeatedly conducted in our country but not anti-China, is no pure coincidence.

Is there any Chinese influence infiltration in the private enterprises and the economy?

South Korea's economic susceptibility has been evident through the '限韓令(state ban on Korean culture). China imposed the bans in retaliation for Seoul's decision to deploy the THAAD missile system in 2016. Some three dozen South Korean celebrities have been banned from appearing on Chinese media. Meanwhile, shares of South Korea's top management agencies and cosmetics companies in China plummeted.

Lotte Mart, divisions of South Korea's Lotte Group, withdrew all operations from China due to sustained harassment by the CCP for offering the South Korean government the site for THAAD installation. Surprisingly, former President Moon responded with a humiliating subjugation by delivering the so-called "3 Nos" promise to Beijing: no additional Thaad deployments, no joining of a broader United States missile defense system, and no tripartite military alliance with Tokyo and Washington.

Seoul also partakes in and actively endorses China's global infrastructure development. For instance, South Korea is a member and holds a 4 percent stake in the Asian Infrastructure Investment Bank (AIIB) created under Xi. The bank underwrites part of (in)famous Belt and Road Initiative, and we currently have the second-largest number of employees working for them.

In 2018, South Korea launched the world's first One Belt One Road research lab, spearheaded by Roh Jae Hun, son of former President Roh Tae Woo, known for establishing diplomatic relations with China in 1992. Roh Jae Hun also holds an executive position at the Korea-China Future Development Committee and serves as an adviser to the International Advisory Group in Chengdu, China.

What about interference in the political realm?

According to the China Index published by Doublethink Lab in April, South Korea ranked 12th among 36 countries considered most vulnerable to China's influence (Japan ranked 28).

One of the top areas most exposed was our politics. Since Xi took office in 2013, Beijing's inference in our domestic affairs has been exacerbated.

There are two main objectives. First, to foster and elect a president and politicians with a pro-China proclivity. Second, to isolate the peninsula from its traditional allies and absorb it into the Chinese periphery.

The CPP has been somewhat triumphant on the first objective. Through the years, Beijing officials, especially Chinese ambassadors to South Korea, cultivated a "China-leaning" clout among Seoul lawmakers and politicians.

Some of these legislators are heavyweights in the Minjoo Party and have not shied away from voicing their fidelity vis-a-vis the Communist regime. Many of them will forgo strengthening economic and security ties with South Korea's traditional allies to maintain their political base and avoid enraging Chinese officials.

How does China affect the South Korean agenda?

The shifting demographics and changing landscape of voting patterns in South Korea bolster Beijing's agendas. Between 2001-20, out of 200,0000 foreigners who obtained South Korean citizenship, nearly 65% were either Chinese-Korean descent or Chinese nationals. Additionally, there are over 120,000 alien permanent residents, most from the same ethnic background.

The first group is eligible to vote in local and federal elections, and the latter in local elections. There is a clear rationale for why the Chinese government favors establishing sister-city relations at the municipal level.

In an unprecedented move, during the 2022 presidential election, 600,000 Chinese-Korean communities openly declared their support for Lee Jae Myung, a firm pro-Beijing candidate. In a more ostensive manifestation, a Chinese expatriate and alumnus of Shanghai Jiao Tong University (an institution funded by the Ministry of Education of China) registered to run for mayor in Ansan City in June.

How does this compare with other countries, especially Japan?

Scholars like Clive Hamilton in Australia and Anne-Marie Brady in New Zealand have probed this issue for years in their countries and are considered foremost experts. What they discovered was far more shocking and destructive than South Korea's example.

The two states were sort of a testing ground for Beijing's overseas infiltration. And, unfortunately, they have been thoroughly successful. Now the prey has shifted to China's closer periphery, namely South Korea.

Japan is less exposed to such infiltration due to its geographic disposition, higher public awareness, and vigilant intellectual community and the government.

What is your ultimate goal?

It's a good sign that President Yoon Suk-yeol and his party are revitalizing security and economic ties with Japan and the United States.

Moreover, discussions on China's potentially malicious interference are emerging under this administration, as witnessed in the interpellation session held [in the National Assembly] in July. However, more is needed.

The government has to elevate related discourse and shield South Korean institutions and corporations from China's looming presence. Likewise, legislatures will need to urgently pass anti-foreign interference bills like Australia's to fend off the CPP's malign influence in the peninsula.

Finally, journalists and scholars should toughen up, recognize that China's "sharp power invasion" is already here, and conduct serious investigation and research. My goal is to nudge South Korea in the right direction via systematic activism, and abolish CI from this country.