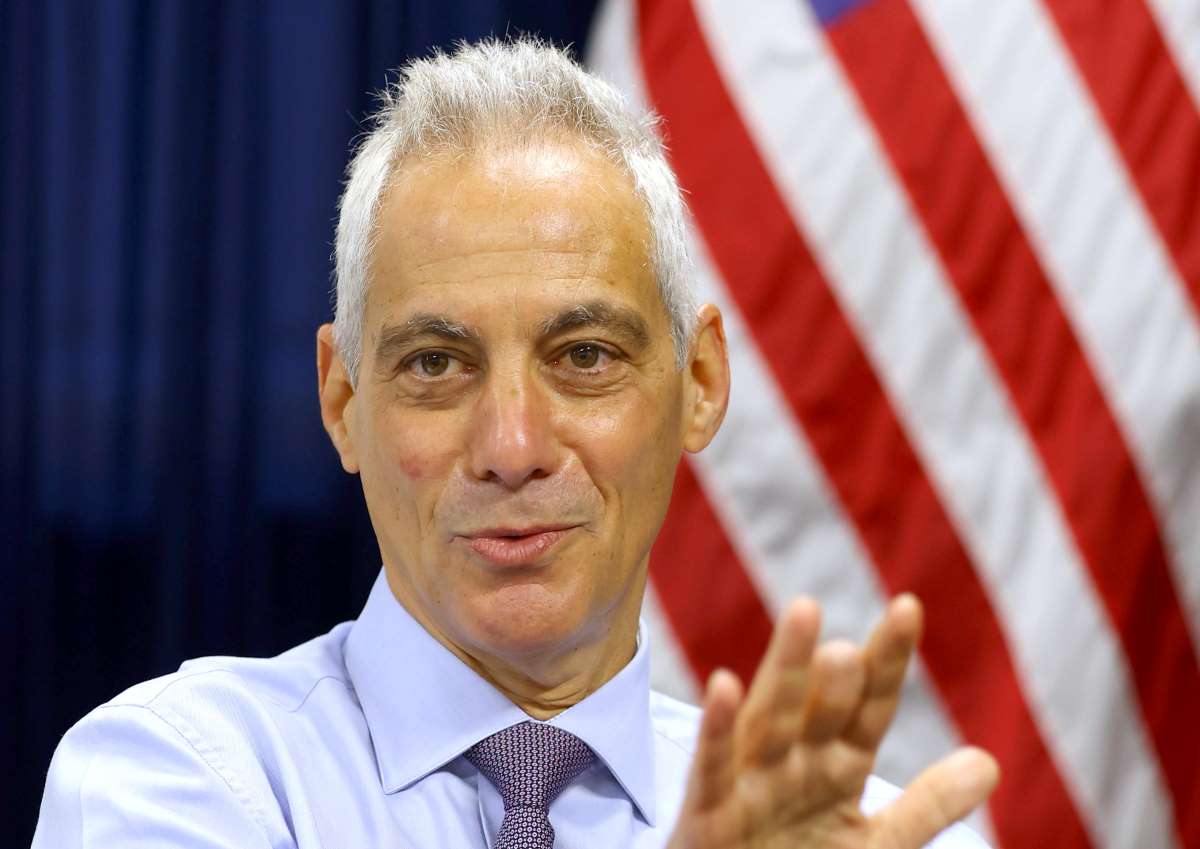 Interview with Ambassador of the United States to Japan Rahm Emanuel at the US Embassy in Tokyo on May 17, 2022 (Photo by Y. Hagiwara, Sankei).

United States President Joe Biden is visiting Japan and meeting Prime Minister Fumio Kishida on May 23. The next day he is participating in the Quad leaders’ meeting in Tokyo between the US, Japan, India and Australia.

Ahead of the occasion, The Sankei Shimbun and JAPAN Forward sat down with US Ambassador to Japan Rahm Emanuel to discuss the current state and future prospects of the Japan-US relationship.

In this first of two installments, Ambassador Emanuel analyzes Japanese Prime Minister Kishida’s response to the war in Ukraine, and gives his views on the future of US-Japan relations in Asia and Indo-Pacific, and the world order going forward.

He also points to further US-Japan collaboration on digital and space technology.

President Joe Biden will visit Japan for the first time. What other meetings have the two leaders had, and what are the prospects this time?

The [US] President and the [Japanese] Prime Minister held a virtual meeting in January. It was supposed to be 45 minutes, it ended up I think an hour and 10- 15 minutes. It went over, which is a very positive sign.

The Prime Minister went to the G7 meeting in Europe and they had some personal time – right before you sit down or when you get up.

Here [for the Quad summit] at least on the first day, there will be a lunch together, a dinner, meetings together, more time together to get to know each other.

What expectations does the US have for the growth of US-Japan relations?

One thing is leadership. You have to show stewardship for the relationship.

For the first time in recent memory, as far as I can tell, both countries' politics and policy are aligned rather than at loggerheads. There used to be friction on trade, on some military or strategic objectives. This is not the case [now].

One point to illustrate this is that I saw a poll where the Japanese public had the United States at 89% favorable views. It went up five points over the last year. There was an American poll that I had seen in the last three months, where there were four countries where the American people had a positive rating above 80%: Canada, the United Kingdom, France and Japan.

When the public of the two countries have a warm affection towards each other, the political policy or strategic objectives are aligned, and you have no electoral constraints, that's a pretty good environment and atmosphere for a lot of progress.


What are some of the concrete ties between the US and Japan?

The United States and Japan have a trade agreement, and one of the big components is digital. In my view, it’s the gold standard as it relates to digital [agreements]. And we want to make that a component that can be built off of.

One of the things that will be a significant part of illustrating the close working relationship and partnership between the United States and Japan will be in the area of space and health. Space, specifically, about what we can do as two countries together in the exploration of skies.

What is your view of the steps taken to counter the tyranny of Russia and China?

Since the war, both the President and the Prime Minister have worked hard and done a really good job, [in creating] from what used to be a transatlantic alliance and an Indo-Pacific framework into a single strategic sphere.

Japan was the first country to divert LNG to Europe in a time of need, under Prime Minister Kishida’s leadership. The Chancellor of Germany was here [in Japan], the Finnish Prime Minister was here, on the eve of her big decision on NATO.

He [Kishida] went to visit the British Prime Minister, the Italian Prime Minister, the Pope. The EU was here [in Japan], and the EU for the first time ever enunciated a clear policy related to a free and open Indo-Pacific. It was such a successful [announcement]ー even China criticized the EU.

[These visits] are an example to me of what the President of the United States and the Prime Minister [of Japan] have done in collapsing into a singular outlook. Germany, France, England, Italy, the EU as a whole, have a vested interest in a free and open Indo-Pacific.

There was a NATO and EU meeting [in March]. Knowing full well that all the other members of the G7 were at the EU and NATO [meetings] but one, we wanted Japan there. So [President Biden] asked for a G7 meeting. That has helped, I think, make these two separate geographic spaces become singular, with a political component.


How does President Biden evaluate Japan's response on the sanctions against Russia to support Ukraine?

[Japan] has leaned forward with the type of military material support that the United States was proud to fly over as an ally and get it at the front lines.

The United States and President Biden very much appreciate the way Prime Minister Kishida has leaned forward and decided very quickly that this was not a time to say “Japan has a certain history as it relates to negotiating with Russia.”

How do you see Japan’s role so far?

One of the things that the Prime Minister has done very effectively is to make unity a strategic asset.

This is not Europe's fight, this is not the transatlantic fight, this is a fight for all of us that believe in a rules based system. And when those rules are broken, they're broken for everybody.

One of the things the Prime Minister is realizing – that we fully embrace – is that if you are permissive towards one country breaking the rules, you set a precedent for the next time those rules get broken. And they can get bigger breaks and bigger rules with bigger consequences. Basically a zero tolerance for rules violation policy.

What about a US-Japan joint project involving ASEAN countries and Pacific Island nations?

We have our not-just-allies, but also our friends, including Japan, Korea, Australia, New Zealand. Then there are the ASEAN countries.

It is incumbent upon us in developing political, economic, and national security policies that we develop policies that reinforce our friendship with our allies, and are inclusive enough to bring in the ASEAN countries and others in the region.

An example of that was that Japan was very helpful in getting eight of the ten ASEAN countries to cosponsor the UN resolution of March 2 that condemned Russia's invasion of the war on Ukraine. In fact, it was so strong, Cambodia sponsored it.

When it comes to economic engagement, national security, knowing where our allies [stand], (meaning Japan, Korea, Australia, New Zealand and India) but then also knowing where the ASEANs [stand], [and] come up with a policy that captures all of that.

How do you see the world order going forward?

One way to think of it as democracy versus autocracy.

Another way to think about it is a rules-based, freedom-based set of countries versus not. I think that has a more inclusive quality.

(Click here and here for related articles in Japanese)