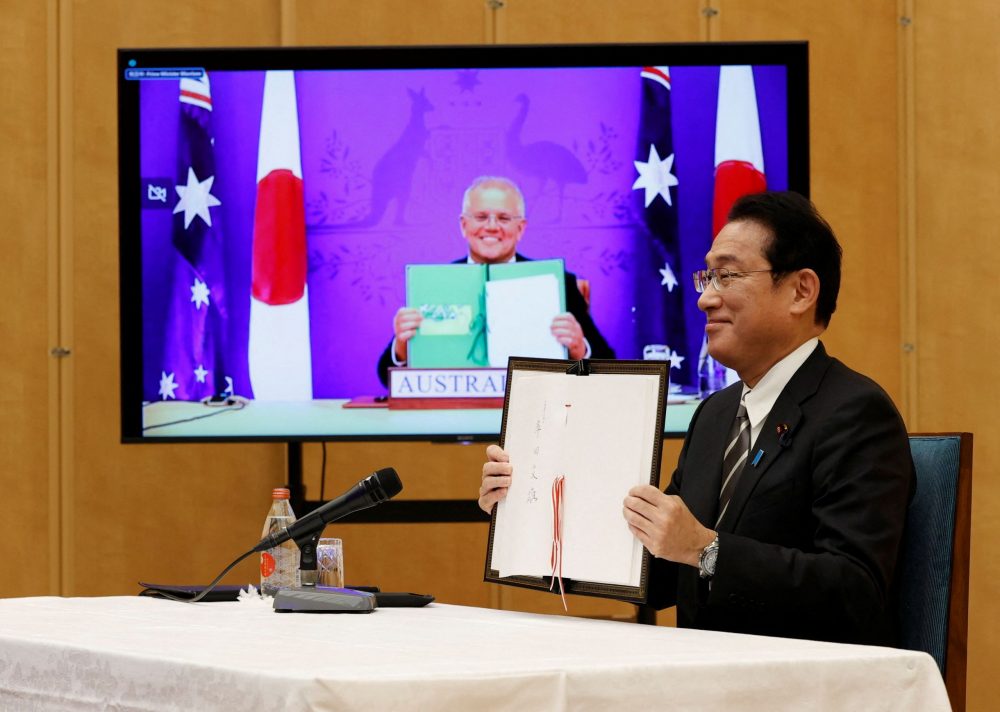 The Australian and Japanese prime ministers met virtually on January 6, 2022 and signed a Reciprocal Access Agreement (RAA) that makes it easier for each nation’s troops to operate in each other’s country. As important, this agreement strengthens the political and psychological groundwork for increased military cooperation between the two nations.

It’s the first such agreement Japan has signed with a country besides the United States. And it took a while.

An agreement in principle was reached in November 2020 between Japan’s then Prime Minister Yoshihide Suga and Australian Prime Minister Scott Morrison – after six years of negotiating. It took another 14 months to finalize the deal.

The door is now open wide in both directions for practically any initiative the two sides desire.

One should remember, however, that the Japanese and Australian militaries are not strangers. Japanese forces have been training in Australia since the early 2010s, to include sending ships and troops to Talisman Sabre and other exercises. Japanese ships have also exercised alongside the Australian Navy in the Indian Ocean Malabar Exercise and in the South China Sea.

Individual Australian Defense Force personnel have been assigned to Japan for decades. And Royal Australian Air Force (RAAF) aircraft have used United States bases in Japan (under United Nations auspices) in recent years while enforcing North Korea sanctions. And in September 2019, a detachment of Australian F18’s conducted a first-ever joint combat exercise with the Japan Air Self-Defense Force in Japan.

A decade ago, most observers considered a Japan-Australia RAA and all the above activities to be impossible.

Chinese threats, pressure, and saber rattling do indeed have a silver lining.

Now that the deal has been signed, the important thing is what both sides make of it.

The right officers, doing some pushing and persuading — and with some help from the US Marines and US Navy ー can move the Australia-Japan defense relationship forward on a far broader front than just “Army to Army.”

And when the Americans and Japanese finally establish a joint headquarters in Japan (hopefully before hell has frozen over), the Australians should be an integral part of it.

Another helpful initiative would be deploying a RAAF squadron to Japan on long-term deployment and, vice versa, a Japan Air Self-Defense Force squadron to Australia. Bringing the Australian army and navy to exercise in Japan is also easy.

Beside the favorable “optics” of the Japan Self-Defense Forces and Australian Defense Force operating together, the JSDF benefits from deeper exposure to another military and different ways of doing things. And both benefit from the psychological and political ties that come from deeper military-to-military relations.

The JSDF absolutely needs opportunities for realistic training to better professionalize itself. It can’t do this in Japan, owing to limited training areas and excessive local restrictions.

Australia offers excellent opportunities for all three JSDF services to train by themselves, together, and with other militaries.

Australia’s Northern Territory, in particular, is the best place in the entire hemisphere for the sort of unrestrained, combined arms training that Japan desperately needs. JSDF’s only other alternative is to make the trip to Southern California – and even then, US training facilities are not as good as those in the Northern Territory.

Here’s one idea: combine Japanese and Australian amphibious forces into a “joint task force” to master the complex air/sea/ground coordination that is part and parcel of amphibious operations – but also applicable to a broader range of military operations.

Send a Japanese amphibious ship — even an older Landing Ship Tank (LST) — and a battalion of Japanese “Marines” from the new Amphibious Rapid Deployment Brigade (ARDB) down to Australia for six months and operate out of Darwin, as well as over in Queensland, with Australia’s amphibious force.

It’s a good way to give Japan’s ARDB some real experience outside Japan, in an unfamiliar environment and with foreign forces. That’s how a military improves. Australia’s amphibious force can also use the practice.

Maybe the two could operate the Australian-Japanese task force up into Southeast Asia or throughout Oceania, with HA/DR training and response as one of its missions. That’s urgently needed as Chinese influence steadily expands in the region.

This is all far preferable to the canned exercises in Kyushu or Hokkaido — with “commissars” at JSDF headquarters in Ichigaya nearby to keep the training as “safe” (in other words, unrealistic) as possible – while cowering in fear that somebody might complain the training is “too noisy” or “scary.”

No. Talisman Sabre is a good exercise. But for the participants, such exercises can become like a piano player who practices only one song. He might play it perfectly, but it is still just one song. Moreover, it’s a song opponents have had time to study as well.

The RAA is politically important. Rather than giving in to Chinese threats and bullying, two of Asia’s key democracies deepen defense ties – with the potential for creating real operational capabilities – and employing them around the region.

The RAA agreement also belies Beijing’s shrill claims that regional nations dislike Japan because of World War II and fear a remilitarized Japan. The Australians have as much reason as anyone to hold a grudge, but they’ve long since recognized that today’s Japan isn’t 1930s-1940s Japan. Take away Korea and China, and that’s the feeling throughout most of the Indo-Pacific, if one looks closely.

The RAA is also good news for the Americans.

For starters, US forces are overstretched regionally and worldwide. Whatever the JSDF does in or with Australia feeds into the United States’ desperate (though unstated) need for a more capable JSDF. That means, a JSDF capable of fighting in its own right, and also as an ally. And this is no less beneficial to Australia – which is game, but not big enough to defend itself against an angry PRC.

As important, increased Japan-Australia activities break down the “hub and spoke” nature of the US presence in the Pacific. That’s a construct that has American forces operating too often bilaterally with Asia/Pacific nations (i.e., the spokes).

The “spokes” need to operate together – creating a more durable “web” — without the Americans driving things. Doing so improves capabilities and also deepens the previously mentioned psychological and political ties that come of military-to-military engagements between like-minded nations.

This doesn’t mean the Americans are excluded or unnecessary, but rather it bolsters the US presence as part of a more complex and stronger web of defense relationships. It should be seen as “cross-bracing” rather than as a replacement or a hedge.

The “web” approach is particularly important as, given the countries involved are democracies where policies can change with elections, the more there are overlapping defense relationships, the more likely the region as a whole can continue to build its defense posture even if the government changes in one of the partners.

Beijing is of course displeased with the RAA and will use its levers to try to stifle it before it can fully form.

Japan’s once powerful pro-PRC constituencies in political, official, and business worlds are quiescent for now, but that can change. Given this, one wonders if Prime Minister Fumio Kishida’s administration might put a brake on attempts to do more with Australia on the military front.

Something similar may even play out in Australia should Labor win the next election. Laborites say they won’t, but one wonders.

Prime Minister Kishida needs to allow the JSDF to up its game considerably. Japan’s military still needs more money (for training and personnel) and to meet recruiting targets that it has missed by 25% annually for years. The JSDF is still not ready to fight a war – needing among other things, a joint capability (which it doesn’t have).

Too often it seems that signing an agreement is an end in itself.

So here’s an idea, a year from now, let’s hold another press conference and see what has actually been accomplished out of the RAA – and what the Japanese and the Australians are doing with each other – that could only have happened because of the RAA.

Grant Newsham is a retired United States Marine Officer and a former U.S. diplomat with many years’ experience in Japan. He was the first US Marine liaison officer to the Japan Ground Self Defense force and was instrumental in promoting the JSDF’s initial moves towards an amphibious capability.