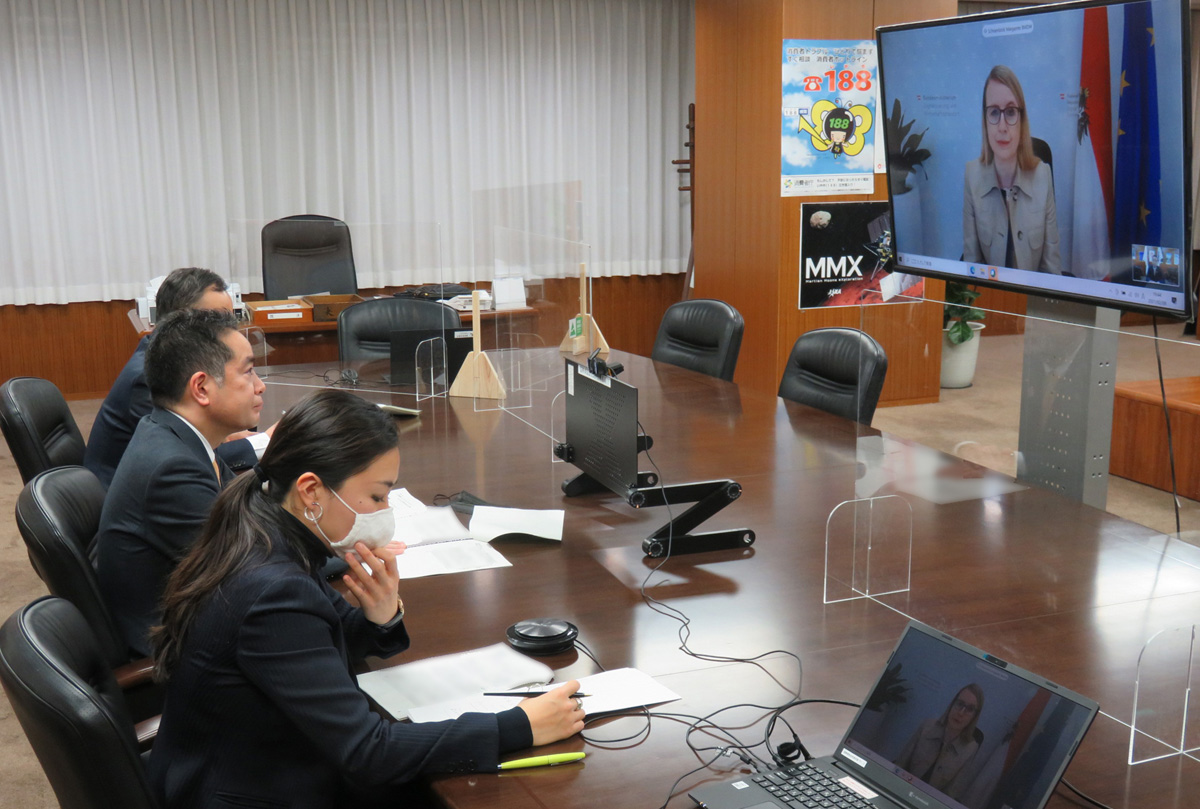 The 7 nations are Yemen, Greece, Djibouti, Turkmenistan, Bangladesh, Bhutan, and Mali. In addition, the International Fusion Energy Organization and International Solar Alliance have said they will be part of the event, which is organized around the theme, “Designing Future Society for Our Lives.”

Inoue, appointed minister for the international event, acknowledged the notifications, saying: “I welcome those official expressions of participation. I appreciate it.”

Inoue held bilateral online meetings to promote the Expo with his Belgian counterpart, Deputy Prime Minister for Economy and Employment Pierre-Yves Dermagne on Wednesday, February 3, and another with Austrian counterpart Minister of Digital and Economic Affairs Margarete Schrambock on Monday, February 8.

The Paris-based Bureau International des Expositions (BIE) approved the Japanese government’s application for the Expo 2025 event planned for the Kansai region, including Osaka, on December 1, 2020. The approval freed the government to solicit the participation of other nations.

Hoping for the participation of 34 countries and the European Union, the minister has appealed to foreign ambassadors serving in Tokyo, inviting them to his office in Kasumigaseki. Although several countries and international institutions have said they want to be part of the Expo, uncertainties remain as the cloud of the coronavirus pandemic continues to hang over the event.

The Appeal of Japan’s Vision for Expo 2025

In his online conversation with both Belgian and Austrian counterparts, Inoue reiterated the Japanese side’s determination to make the Osaka Kansai Expo 2025 a global success. He also promoted the idea of cooperation with the world, identifying the Expo as the place to showcase concepts and ideas that contribute to making future societies resilient and sustainable, with a view to the post-corona age. Both ministers responded with prompt expressions of intention to participate.

The Japanese government approved the basic principle for the Osaka Expo on December 21, 2020 at a Cabinet meeting.

In making the event official, the government also expressed its will to use the event as a place to spotlight a global future decarbonized society featuring Japanese innovations. Japanese Prime Minister Yoshihide Suga launched the goal of realizing a carbon neutral Japan by 2050.

PM Suga has also prioritized national digitization as an important aim of his administration. Expanding this goal, the government hopes to utilize the newest digital technology to “showcase a new style of World Expo.”

The Japanese government calculates a ripple effect from the Expo of almost ¥2 trillion JPY ($19 billion USD) and hopes to use the momentum to foster economic growth nationwide.

The basic concept calls for Japan to implement “in an efficient and effective manner” the Expo and its sub-themes of “Saving Lives,” “Empowering Lives,” “Connecting Lives.” At the same time, it calls for incorporating science, technology, and innovation; cosmic space; marine; wellness and healthcare; and “cool Japan.” It envisions the event as a catalyst for improvement in the social and economic changes society is undergoing in the aftermath of the coronavirus pandemic.

Osaka-Kansai Expo will be held over six months, from April 13 to October 13, 2025, at Yumeshima, an artificial island in the city of Osaka. The pre-pandemic plans estimated 28.2 million visitors, exceeding the 22 million visitors who came to the last expo event hosted in Japan, Aichi Expo 2005.

Despite the continued preparations for the Expo by the Japanese government, little interest outside Japan has been expressed in the event at this point. The future remains clouded by the continuing COVID-19 pandemic and continuing uncertainties over the delayed 2020 Tokyo Olympic and Paralympic Games.

The Expo minister told the press on February 9 that, while the top priority is to end the coronavirus pandemic quickly so as not to generate cancellations for the Osaka Expo, he would continue pressing his counterparts in other countries to participate in the event.