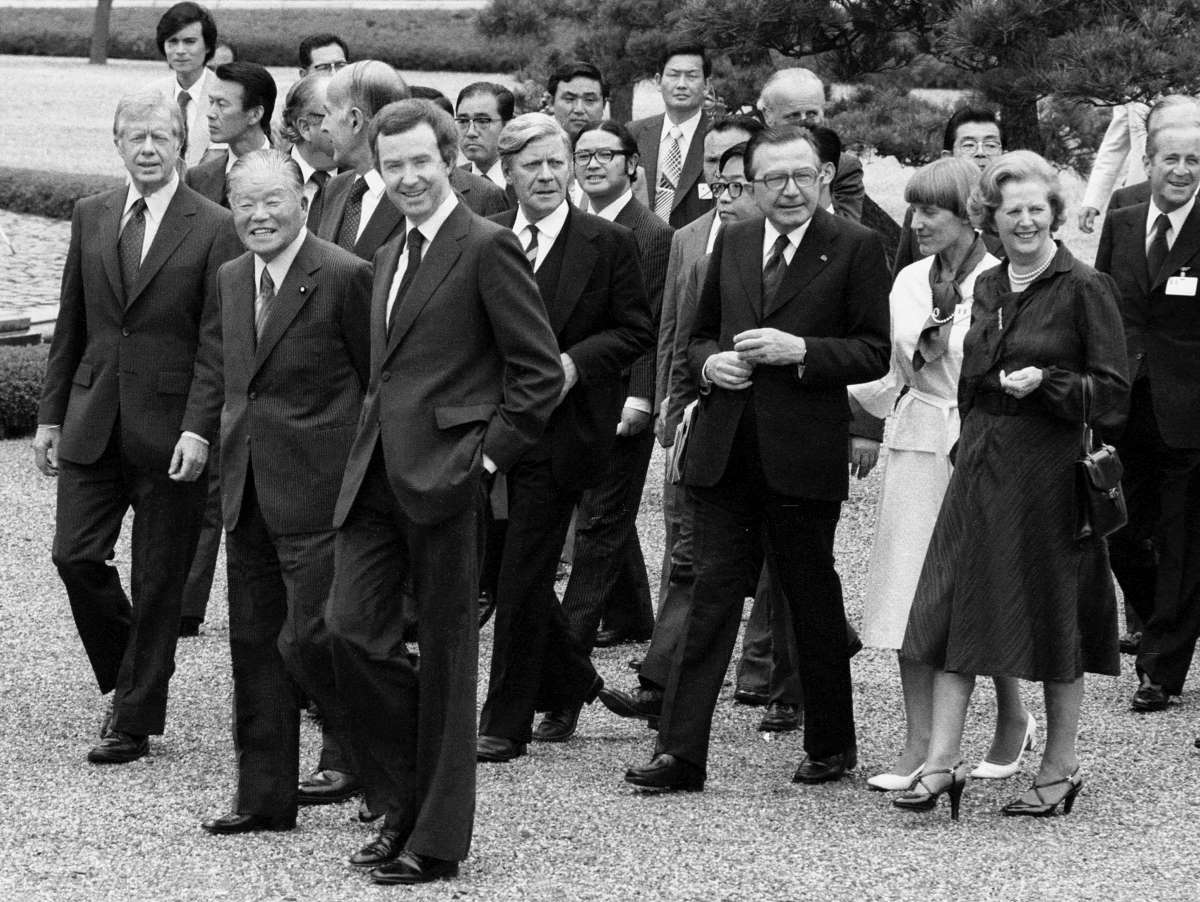 The First Oil Crisis, which occurred in conjunction with the Yom Kippur War in October 1973, dealt a heavy blow to the Japanese and world economies. That was half a century ago. Masataka Kosaka, an expert on international politics and Japan's security environment, once said that this was the first crisis Japan directly faced during the postwar era.

In 1975, the first G6 summit was held in Rambouillet, France to discuss international economic issues. Initially only France, Great Britain, West Germany, and the United States were supposed to attend the summit. But Japan, then the world's second-largest economy, was invited to participate at the request of the US.

Then in 1979, Japan chaired the summit for the first time. This meeting took place amid the Second Oil Crisis triggered by the Iranian Revolution. Masayoshi Ohira was the incumbent prime minister.

Also during this period, Saigon, the capital of South Vietnam, fell to Communist forces in 1975. In 1976, Japan formulated its first National Defense Program Guidelines, assuming a détente between the US and the Soviet Union.

Then, fearing the deterioration of US-Soviet relations and the US withdrawal from Asia, Japan finalized the Guidelines for Japan-US Defense Cooperation at the end of 1978. The Soviet invasion of Afghanistan at the end of 1979 ushered in the New Cold War between the US and the Soviet Union, or Russia, its primary successor state.

Various analogies and cycles can be found in history. But some of the recent historical events are remarkably similar.

After the United States hastily withdrew from Afghanistan, the capital Kabul quickly fell into the hands of the Taliban. Then, as if to capitalize on that failure, Russia invaded Ukraine, which created the current global energy crisis.

Additionally, tensions in US-China relations have also been described as the New Cold War.

Against this backdrop, Japan revised its three key security documents, including the National Security Strategy, at the end of 2022.

This May, Japan will host the 2023 G7 Summit in Hiroshima. Moreover, there is another similarity. Prime Minister Fumio Kishida belongs to the Kochikai faction of the ruling Liberal Democratic Party as did Ohira.

But there are some major historical differences as well as these parallels. Whereas Europe was the main "battlefield" during the US-Soviet Cold War, the epicenter of contention in the US-China Cold War is Asia.

Then there are the additional threats posed by Russia and North Korea.

Japan is also losing its overall national economic strength and could eventually forfeit its status as the world's third-largest economy. It indeed faces what Ryoichi Oriki, a former chief of staff of the Joint Staff of the Japan Self-Defense Forces, describes as "one of the biggest postwar crises."

Unquestionably, Russia's invasion of Ukraine has shaken to the core the UN-based promise of peace (justice and faith of peace-loving peoples of the world), which is the premise of Japan's Constitution.

Diplomacy and Defense are Not Mutually Exclusive

Those against constitutional revision reject Japan's relationship of collective self-defense with the United States and wish to stick to an exclusively defensive security posture. But what that means, essentially, is that Japan could be forced to fight on its own, like Ukraine is doing now.

Of course, diplomatic efforts are vital. Recently, PM Kishida completed a whirlwind trip to visit member nations in Europe and North America in his role as chair of the G7 industrialized nations.

Japan must also fulfill its responsibilities as a non-permanent member of the UN Security Council.

Nonetheless, diplomacy and defense efforts are not contradictory. The three security documents are well framed. But Japan's strategy cannot be considered complete unless stable funding is secured.

From here on out, we will need to display considerable patience in the process of involving many relevant actors as stakeholders.

Also, Japan and the United States must enhance policy coordination. That includes the revision of the Guidelines for Japan-US Defense Cooperation. In this process, the two nations should discuss whether they are on the same page regarding their stance toward China.

Discussing defense like this might draw fire from so-called "liberals" (who, contrary to what the term implies, are hardly tolerant). They may accuse such arguments of attempting to expand Japan's military by taking advantage of the Ukraine crisis.

Such howls of peril are nothing new from the liberals. The same refrain was heard when defense spending broke the one percent of the GNP threshold. It was heard again when it was decided that the JSDF would participate in UN peacekeeping operations. And again when the Legislation for Peace and Security permitting the limited exercise of the right of collective self-defense was adopted. Looking back, it is evident that such fears were unfounded.

It is now twelve years since the Soviet Union attacked Afghanistan. The Soviet Union collapsed, and the Cold War ended. In a decade or so from now, if what Oriki calls "one of the biggest postwar crises" turns out to be a groundless fear, I can think of no greater blessing for Japan.

But diplomatic and defense efforts are required to ensure that the crisis never develops beyond the stage of apprehension. As a precondition for this, domestic political stability is essential. It remains to be seen whether Japan can avoid repeating the history of long-term political administrations followed by short-term ones.

(Read the Seiron column in Japaense.)

Koji Murata is a Professor of Political Science and Dean of the Faculty of Law, Doshisha University