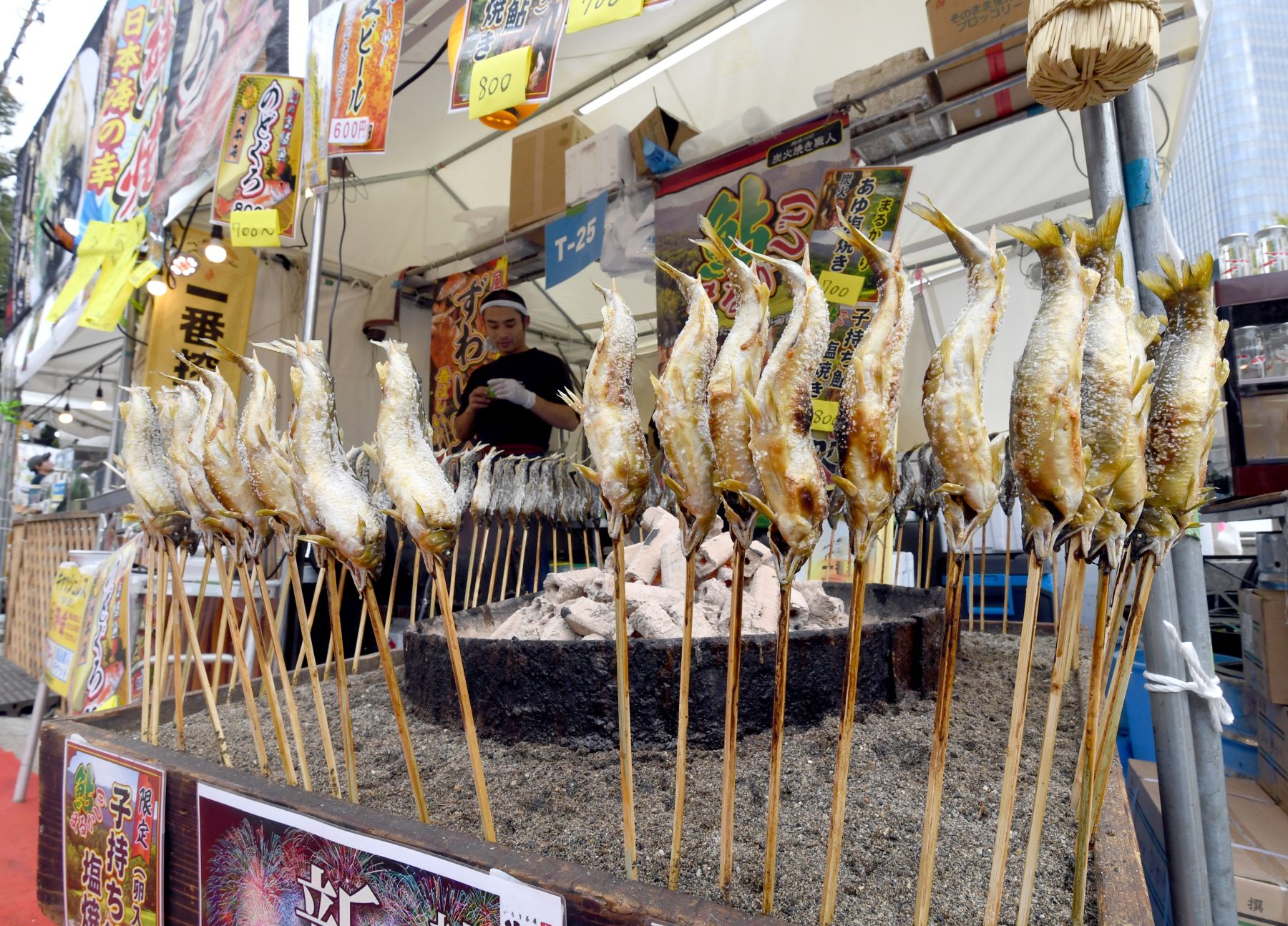 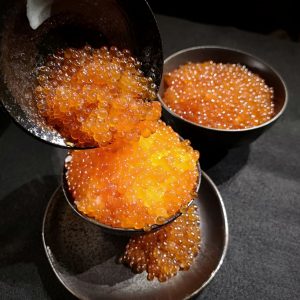 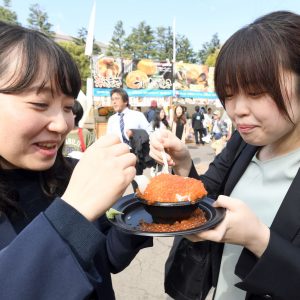 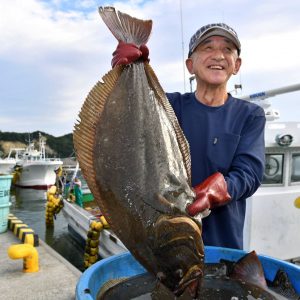 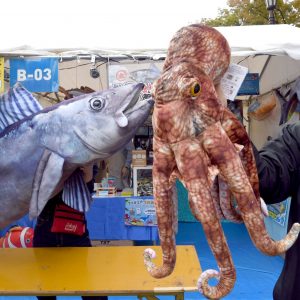 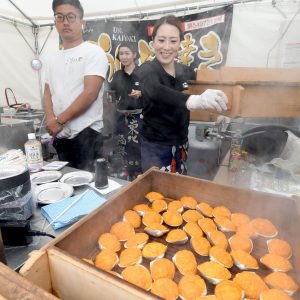 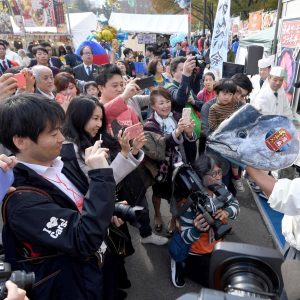 Those who want to eat the best fish from all over country, right in the capital, will find all of that and more at the Japan Fisherman’s Festival at Hibiya Park in Tokyo’s Chiyoda Ward from November 14 to 17.

The festival features fish served in every way imaginable: raw, grilled, fried, in soup, on noodles or rice. In 2018, there were 90 booths, with more than 160,000 people making their way through the gates. This year is expected to be no different.

On its fifth year, the event promises to have popular dishes, such as sea urchin and tuna rice bowl. It will also feature a new area with traditional paper lanterns for those who want to enjoy their food in a more evocative atmosphere, especially in the evenings.

Eating the freshest fish is one part of it. The other is to find the highlights among this year’s offerings. JAPAN Forward checked out a few options that are keeping up with the 2019 themes of culture and recovery,  to help you decide where to start. 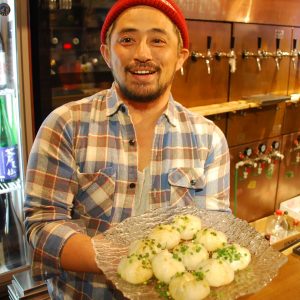 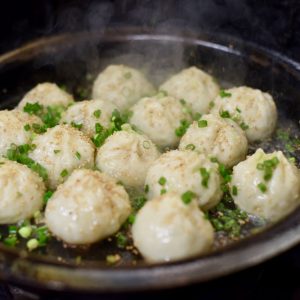 This year, the spotlight is on products from Fukushima Prefecture, known for the grace with which it suffers disasters. The motto is, “Let’s Eat Joban Mono from Fukushima!” — a project supported by The Sankei Shimbun.

Joban mono is fish caught off Iwaki, Fukushima Province. The area, despite being heavily affected by the Great East Japan Earthquake of March 11, 2011, provides what is considered to be a highly reputable and reliable source of fish to Tokyo’s famous Tsukiji fish market.

The Joban Mono project aims to restore people’s faith in the products from Fukushima. It showcases food and recipes from six prefectures in Northeast Japan, including Fukushima. The recipes are from “Tregion,” a specialty restaurant in Asakusa, Tokyo’s Minato ward, which specializes in Tohoku (Northeast Japan) cuisine.

“Fukushima is a treasure trove of delicious ingredients. We are not doing this for the recovery, but simply we want even just one more person to enjoy eating the food we prepare,” said Kei Yoshida, the managing director of Tregion.

It is just one of the many ways the Ministry of Agriculture, Forestry and Fisheries, under the larger umbrella of the SAKANA & JAPAN PROJECT, is trying to revitalize the region affected by the Great East Japan Earthquake.

One of the stands at the festival in Hibiya will be that of Tregion’s branch restaurant, Tohoku Sakeba Tregion Port. Visit its stand at the festival and try “sanma paw paw yaki,” a delicious dumpling soup. Traditionally, “sanma paw paw yaki” is a mackerel burger, which mixes the delicate fish with spices and miso. The taste signals the simple origins of the region’s fishermen making fresh burgers out of the remnants of the day’s catch. The lyrical name, though, comes from the sound of fish fat falling into the flames of the barbeque, making the characteristic “paw paw” sound (and bringing on a good appetite).

It was a cook in the Fukushima branch of the famous Yokohama Chinese restaurant Kaseiro who first thought to make dumplings of the fish patties. They were served to customers in Yokohama’s Chinatown more than 70 years ago. Kohei Yoshino then came up with a recipe and commercialized the product, with the participation of a food processing company. Thus the traditional fish ball was wrapped in mochi, with a soup flavored with the favorite autumn fish, mackerel.

For those who want to venture further into Tohoku cuisine, the Tregion Port’s stand also has clam gratin and sea urchin grilled on a clam shell, both featuring the flavors of the sea in the best way. The catchphrase for all these dishes is the same: “everyday life in Tohoku.”

The restaurant’s journey to Tokyo is connected with the aftermath of the 2011 disaster. Mr Yoshida himself was a volunteer in the Tohoku recovery effort. He believes firmly that the region’s great flavors are the way to get the region back on its feet. “The fact of building a profitable business and then returning to the territory [after a disaster], that is the real meaning of rebirth,” Yoshida told The Sankei Shimbun.

That is why Yoshida first came to participate in the Japan Fisherman’s Festival in November 2013. His aim is to convince people through their palate. As he said, “If people eat what we make, they should be convinced of the fact that Joban Mono is delicious!”

Rounding Out Tradition with a New Image for Whale Meat

For the first time in 15 years, commercial whaling has restarted. Along with it came a debate on the best ways to consume whale meat. Of course, it also features at the Japan Fisherman’s Festival.

The key for those in the industry is the product’s appeal to the young generation, many of whom have never eaten whale before.

A whole section called “Whale Town”  is dedicated to this type of meat at the Japan Fisherman’s Festival. The menu, including whale paella and whale steak, was developed by the whale meat specialist restaurant Rajikku, (らじっく）in the Akiruno town area of Tokyo.

Whale meat consumption has a long history among Japanese people, documented at least as far back as the Edo era. Following the Second World War, it was used as a cheap source of nourishment. Given the lack of food and hardship of defeat, sales of whale meat hit a peak in 1962 when consumption went up to 233,000 tons.

With the fear of overfishing, the International Whale Commission (IWC) imposed a temporary ban on commercial whaling, which continued for 63 years. As a result, research on whales continued, but consumption plummeted to 5,000 tonnes.

Japan exited the IWC earlier in 2019 and resumed commercial whaling hunts in July. But the next issue was how to resume the food culture related to whaling, and one of the suggestions was to give young people in Japan more opportunities to consume this particular meat.

With that in mind, the Japanese Whaling Commission has created the whale burger — high in iron but low in cholesterol and calories.

“People are uneasy about commercial whaling for the industry, but I think it’s a way in which the industry can survive” said the spokesperson of Kyodo Senpuku Co., which sells whale meat.

Admission: Free (each booth has its own price list)

(For more articles on whales, visit our site on the issue at this link.)