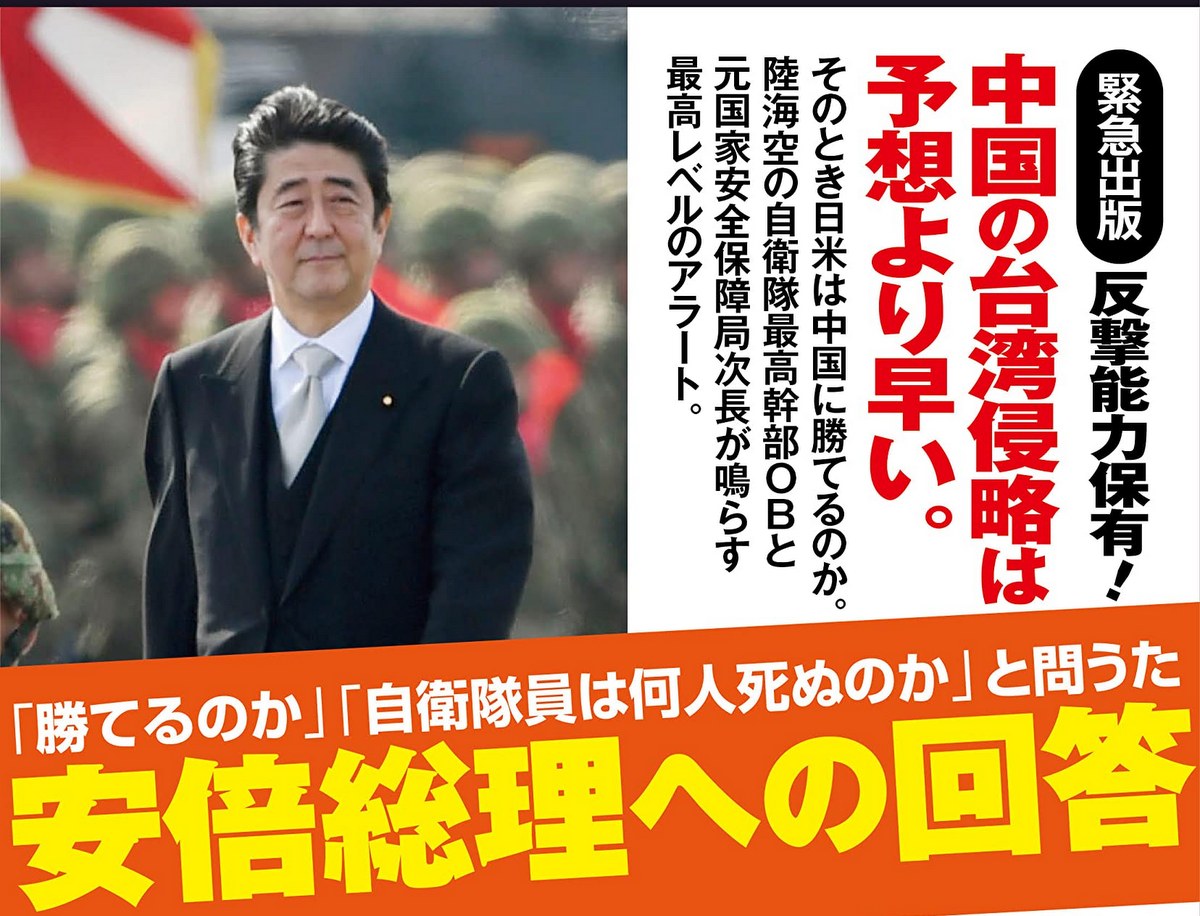 From the book cover, "Kimi Tachi, Chugoku Ni Katerunoka" (Can You Win Against China?) by Nobukatsu Kanehara, Kiyofumi Iwata, and others.

The book Kimi Tachi, Chugoku Ni Katerunoka ("Can You Win Against China?") sounds an alarm about the China threat, the risks of a Taiwan contingency, and the current preparedness of the Japan Self-Defense Forces (JSDF).

It was written by Nobukatsu Kanehara, the inaugural deputy secretary-general of Japan's National Security Secretariat and assistant chief cabinet secretary under the late Prime Minister Shinzo Abe, and three former senior officers of the JSDF, including Kiyofumi Iwata, the former Chief of Staff of the Japan Ground Self-Defense Force.

The book's title was inspired by a phrase once uttered by Abe at the beginning of preparations for the 2018 National Defense Program Guidelines.

Abe asked the JSDF officers present, "Can you win against China? If war breaks out (over the Senkaku Islands in Ishigaki, Okinawa) how many Self-Defense Force personnel will die?"

Former chief of staff of the Joint Staff of the JSDF, Katsutoshi Kawano, says Abe had asked him a similar question. While reporting on an unrelated matter, Abe asked him: "If war breaks out, how much damage will we incur?" Kawano says he answered frankly.

In the book, Kanehara explains Abe's thoughts behind his question.

"In the event of a war, Self-Defense Force casualties will be inevitable. But each person has a family. Prime Minister Abe felt a strong responsibility for them as the commander in chief. In peaceful and prosperous postwar Japan, there had never been a leader like him."

Similarly, Iwata writes: "Prime Minister Abe asked me, 'Can Japan win?' He is the only person to ever ask me this question."

Indeed, former PM Naoto Kan hadn't realized that the prime minister was also the JSDF commander in chief until taking office. Nor did he know that the defense minister was a civilian, not a JSDF official.

In contrast, both times Abe stepped down as prime minister, he was concerned that his worsening chronic illness could compromise his decision-making as the JSDF commander in chief.

Furthermore, it is well-known that every time Abe met with Chinese President Xi Jinping, he stressed that China should not misjudge Japan's intention regarding the Senkaku Islands.

"Prime Minister Abe said to President Xi Jinping, 'Do not touch my island.' After that, he continued, 'Do not misjudge my intentions.'"

Abe's powerful words carried the national will and Abe's determination to defend Japanese territory. Moreover, he was determined to get Japan's message through to a dictator blocked from all criticism and inconvenient truths.

In December 2022, the Fumio Kishida Cabinet approved three key national security documents. They specified the possession of counterstrike capability to attack enemy military targets for self-defense. With them, Japan's national defense strategy to counter the threats from China and North Korea has begun to take shape. But the road has been a long one.

It was in May 2015, the day the Liberal Democratic Party (LDP) General Council approved the Legislation for Peace and Security, which authorized the exercise of the right of collective self-defense in limited circumstances.

Meanwhile, Abe expressed his frustration at the rehashing of the debate among the media and opposition parties. And even frustration with some within the LDP about whether the legislation had enough "restraints" in place.

"It's tiring. I mean, 'Restraints'? Just try telling that to China. There's a country out there expanding its military without restraint, but they choose not to mention that."

Since then, eight years have passed, and the public's views on China and security have become more realistic. Nevertheless, the arguments of the pro-Beijing politicians remain stuck in the same rut.

For example, on a TBS program on January 7, Yohei Kono, a former Speaker of the House of Representatives of the LDP, said: "That policy shift was ridiculous. There was a huge problem with Abe's politics."

However, by now it should be obvious who is being ridiculous.