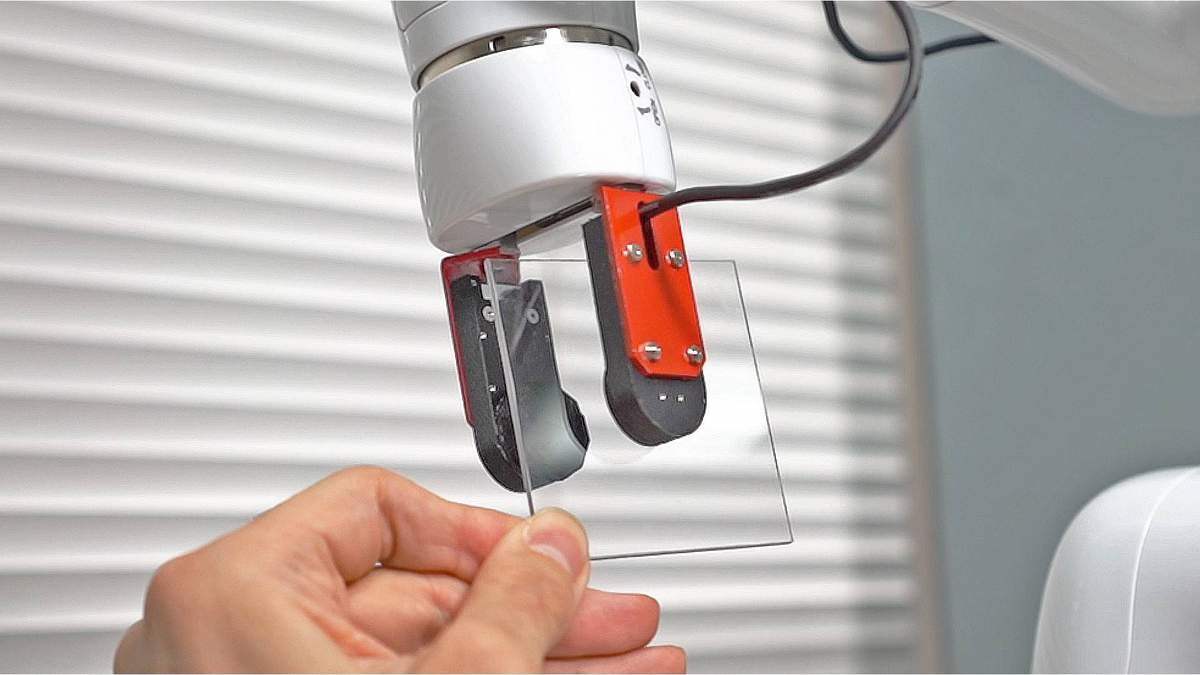 A prototype of Thinker’s proximity sensor. Four infrared sensors located in the circular hole detect the presence of objects. (Provided by Thinker).

Keisuke Koyama, assistant professor at the Graduate School of Engineering Science, Osaka University, has launched a venture company to develop and sell a “proximity sensor” that detects the position and orientation of nearby objects.

When this sensor is built into a robot, the positional relationship between the robot’s body and external objects can be determined more precisely. In turn, this makes it possible for robots and humans to work together on the same task.

The new robotics startup company, Thinker, has four participants, including Professor Koyama and Hiromichi Fujimoto, former president of the robot venture company ATOUN. The company was established on August 12, with a capital of ￥3 million JPY ($20,730 USD), half each invested by Koyama and Fujimoto. Fujimoto is the president of the company, while Koyama is the director, and the headquarters is located in Osaka's Chuo Ward.

Proximity is a sense that differs from both sight and touch. It involves recognizing the presence of objects without seeing or touching them.

The proximity sensor, which was developed based on research by Professor Koyama, uses four infrared sensors and artificial intelligence to measure the shape, distance, and tilt of an object in real time and give a precise description of the object’s characteristics. When this proximity sensor is built into a robot’s arm or hand, it allows the robot to autonomously pick up and release objects.

Even mirrors and transparent objects can be grasped using this unique technology, tasks which have been difficult for previous sensors.

The company will begin providing industrial robot manufacturers and others with sensor samples from the end of September at the earliest.

Most current industrial robots move their arms and hands after processing camera images with an arithmetic circuit to understand an object’s position and orientation. However, with this process, if the target object moves after its position is specified, it cannot be caught by the robot.

When a proximity sensor is built into the robot’s arm or hand, “thin sheet-like objects, like paper, for example, can be easily grasped, and the robot’s capabilities are increased,” says Fujimoto. Glass plates and other reflective objects’ presence can also be accurately sensed.


Humans and Robots Working Closely Together

In most cases, arm robots, which are frequently used in industrial manufacturing, are surrounded by enclosures giving about 30 centimeters of space in order to prevent accidental contact.

If a proximity sensor is incorporated into the robot, it can more easily take into account its surroundings, making it possible for workers to come within a few centimeters of the robot. A world where humans and robots can work together on the same task is likely to emerge.

One of the cofounders, Fujimoto, created the robot venture ATOUN while working at Panasonic in 2003, using the company’s venture system. In that experience he has developed and sold robot suits. However, due to competition from other companies and the COVID-19 pandemic, ATOUN stopped operations in April of this year and was liquidated in July.

Advance (Kawanishi, Nara Prefecture), an industrial equipment assembly and manufacturing company, took over the maintenance of ATOUN products that were previously sold. Fujimoto intends to use the experience and knowledge he gained at ATOUN for product development and business expansion at Thinker.