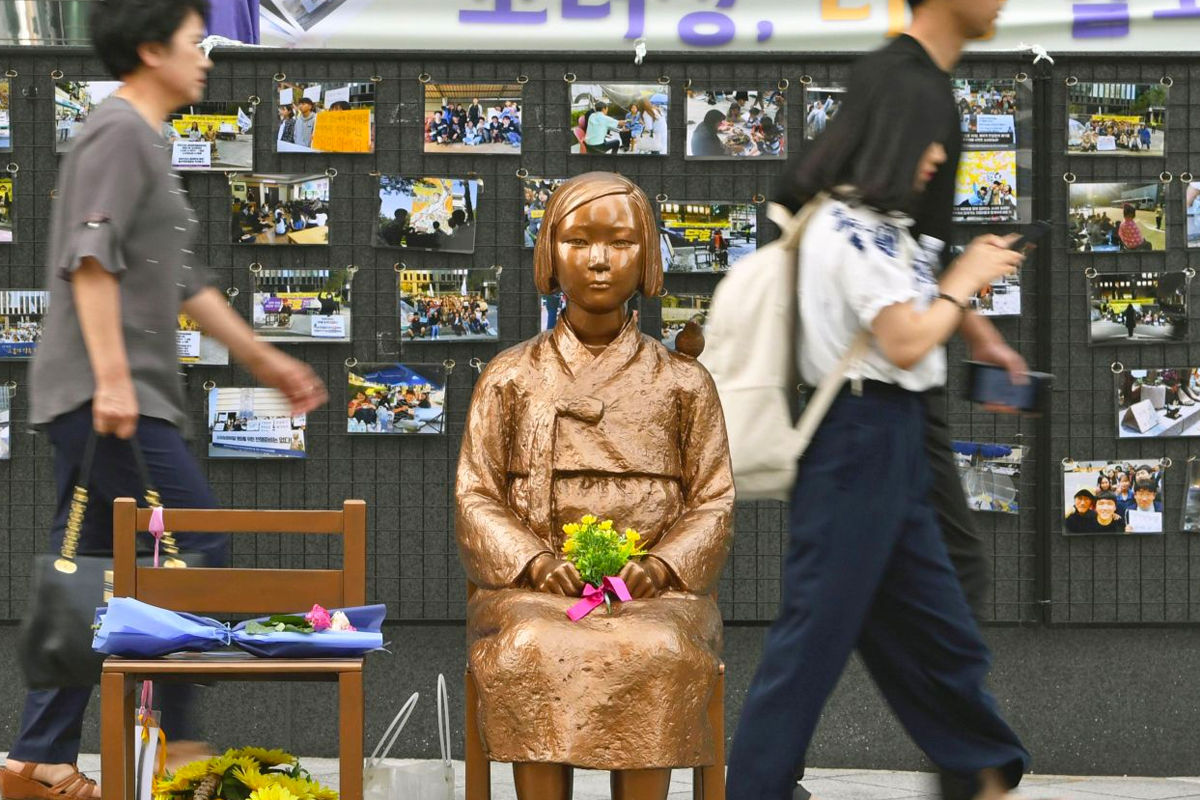 It's been a bizarrely unending story.

Elderly Korean women claim to have been forced at Japanese bayonet-point to work as sex slaves. The Japanese government replies that the Korean government waived claims like this by treaty in 1965. But it expresses sympathy anyway, and offers more money. Koreans still complain. The Japanese government apologizes again, offers more money, and the Korean government promises never to raise the question again. Then a new political party takes power, declares the Japanese apology insincere, and starts the process all over again.

Expressing sympathy to elderly women who have had a rough life is fine. Paying money to an ally in order to rebuild a stable relationship is fine.

But the claims about enslaved Korean comfort women are historically untrue. The Japanese army did not dragoon Korean women to work in its brothels. It did not use Korean women as sex slaves. The claims to the contrary are simply ー factually ー false.

During the 1930s, the Japanese military decided it needed brothels that would agree to keep the risk of venereal disease in check. It was not short of prostitutes. Prostitutes follow armies everywhere, and they followed the Japanese army in Asia.

But many of the prostitutes that followed its army had venereal disease. For an army, disease can be debilitating. To maintain an effective military force, the army needed brothels that required condom usage, that required prostitutes and clients to use disinfectant after every encounter, and that required their prostitutes to undergo weekly health examinations.

Hence, the army proposed a system: if a brothel agreed to these terms, it would designate it a "comfort station," and prohibit its soldiers from patronizing any competing installations.

To hire Korean prostitutes, the brothels used variations on the contracts that the licensed prostitutes used within Japan. Prostitution is obviously dangerous and unpleasant. Even women otherwise interested in the job take it only if the pay is high enough to compensate for those dangers and difficulties and for the reputational hit they will incur. A brothel owner can promise a woman that she will earn high pay, but he has an incentive to lie, and she knows he has an incentive to lie. He can offer her a fixed wage, but then she will have an incentive to shirk. After all, she works in an unmonitored setting. If she is sufficiently unpleasant that no one asks for her at the front desk, so much the better.

The brothels and prostitutes solved these problems by coupling a high up-front payment with a maximum service term that the prostitute could reduce by working hard. More specifically, Tokyo brothels paid new prostitutes an upfront fee that typically ranged from 1000 to 1200 yen. In addition, it paid her room, board, and a fraction of the revenues she generated.

She agreed to work for a maximum of (usually) six years, and the brothel agreed to let her quit early if she generated enough revenue to repay the advance before that. The stereotype that brothels manipulated accounts to keep the women locked in "debt-slavery" is simply not true. Most Tokyo prostitutes paid back their advances early and quit in about three years.

Licensed prostitutes in pre-war Korea used similar contracts. Typically, they served under three-year-maximum contracts rather than the six in Japan. As in Japan, most left the industry by their mid-20s.

Other Korean women worked as unlicensed prostitutes. And even before the Japanese military began its comfort-station network, Korean women fanned out on their own across Asia to work as prostitutes.

Working at a comfort station in war-torn China or Southeast Asia was a more dangerous job than working in Seoul. There was the risk of war. There was a much higher risk of disease. And should the brothel prove abusive, a prostitute would find it harder to leave the brothel and fade into the comfortable anonymity of a Korean city. To take these jobs, the Korean women demanded and received very high pay. They worked shorter terms ー typically two years. Until the last months of the war, they repaid the advances and went home.

The claim that the Japanese army coerced Korean women into working in comfort stations dates to the 1980s. In 1982, a writer named Seiji Yoshida began talking about "comfort women hunts" he had led. He gave lectures, and soon incorporated the stories into what he styled a memoir. "My War Crimes," he called it. He had worked from 1942 in a labor office in Yamaguchi. There, he had supervised the work of mobilizing Korean workers. In May of 1943, he wrote, his office received an order to recruit 2000 Korean workers. More pointedly, it received an order to acquire 200 Koreans to work as "comfort women."

With nine soldiers, Yoshida continued, he went to the island of Jeju. There, he led "comfort women hunts." In a typical account, he recalled finding a compound where 20-30 women worked. He and his team went in with guns. When the women started screaming, nearby Korean men came running. He and his team grabbed the women by their arms, however, and dragged them off. The mob soon grew to over 100, but Yoshida's soldiers drew their bayonets and held them at bay. They loaded the women into the truck, drove 5 or 6 km, and then stopped for a half hour to rape them. The military transported the women to the harbor and loaded them onto its ships ー hands tied, and each woman bound to the next.

In fact, Yoshida had invented the story. The Asahi Shimbun newspaper gave it flamboyant coverage, but several historians questioned it from the start.

Ikuhiko Hata was among the first to doubt the account, and traveled to Jeju to investigate. He found the village where Yoshida claimed to have conducted one of the larger hunts, but no one remembered anything about a raid. This is a small place, one elderly man told him. If the Japanese military had abducted women to serve as prostitutes, no one would forget it.

Other historians and reporters ー both Japanese and Korean ー followed. Yoshida initially insisted that the events had occurred. He started avoiding reporters and scholars, however, and eventually admitted to having fabricated the book. By the mid-1990s, scholars had dismissed Yoshida's account as fiction. Eventually, even the Asahi Shimbun retracted its stories.

One organization lies at the heart of the current dispute, and it is an organization that manipulates the dispute in relentless opposition to reconciliation with Japan. The organization is the Chong Dae Hyup (CDH), the "Korean Council for Women Drafted for Military Sexual Slavery." The CDH organizes weekly protests in front of the Japanese embassy in Seoul. It began the installation of comfort women statues around the world. It pressured the former comfort women to reject the compensation offered by Japan. And it brutally attacks Korean scholars who would question the "sex-slave" narrative.

CDH controls most of the public testimony by the comfort women. It maintains its ability to do this by collaborating in the operation of a nursing home ー the House of Nanum ー for the women who tell the stories it wants reported. Only a small subset of the comfort women recount the autobiographies on which the conventional Western account depends, and these are the women that the CDH promotes.

Several of these women have changed their stories in dramatic ways. When they first identified themselves as comfort women, they told of having taken the jobs on their own, or of having been sold into prostitution by their parents. As the movement began to extract money from the Japanese government, they changed their stories. Now they told of being forced into the job by the military, and that is the story that the CDH has promoted.

By sabotaging any reconciliation between South Korea and Japan, the CDH directly promotes a key North Korean political goal ー and that seems to be the point. Initially organized by Korean communists, the group was at one time designated by the South Korean government as a North Korean affiliate.

As academics, we are used to dealing with exaggerations. If someone recounts a story that sounds bizarre, we assume the truth must be more modest. It usually is. We are not used to finding that the story is pure fiction. But that is the nature of the comfort-women-sex-slave story.

Within Korea, the story fairly obviously struck a nationalistic chord. Within Japan, it fed a long-standing opposition among professors to the Liberal Democratic Party and its plans for the Self-Defense Force. And within the western academy, it fit the triple "narratives" of racism, imperialism, and sexism currently so fashionable in some departments.

Yet pure fiction it is.

Find other articles by the author on JAPAN Forward, at this link.