[Speaking Out] Dissolve SCJ and Normalize Academia in Japan 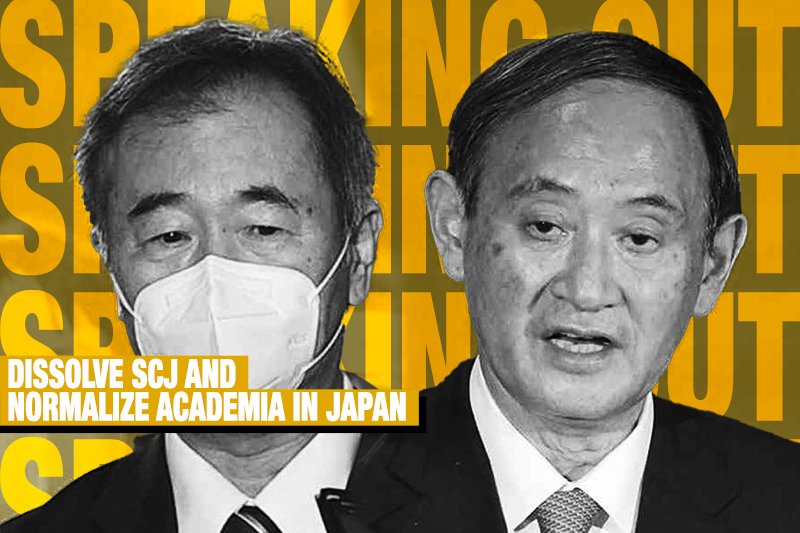 The raison d’etre of the Science Council of Japan has become a red-hot  issue. A law to create the SCJ was enacted in 1948. Then, GHQ, the General Headquarters of the Allied Forces viewed Japan as the enemy of world peace and aimed to transform Japan into a weak country that would never stand against the  world.

“We, the Japanese people, […] resolved that never again shall we be visited with the horrors of war through the action of government, do proclaim that sovereign power resides with the people and do firmly establish this Constitution.” So says the preamble of the Constitution of Japan that  was drafted by the GHQ and put into effect in 1947. The language itself as well as its history makes clear that the constitution was established to prevent the Japanese government from starting any war of aggression again that might bring harm to the people of Japan.

The SCJ was established with the same spirit. In that light, it has strictly  monitored the government under a doctrine that the government is inherently bad, while trusting foreign countries whose actions run counter to Japan’s national interests under another doctrine that they are inherently good. Constitutional scholars dominantly and grotesquely still argue that the Japanese Self-Defense Forces are  unconstitutional, while the SCJ has publicly banned scholars from doing research that would contribute to national defense.

The academic circles of social science and cultural science in Japan are politically biased. They dominantly view the government as a would-be criminal, and try to strictly monitor government activities, although some scholars are free from such bias as is found in the dominant atmosphere.

In the late 1980s when I began to study wartime comfort women and  North Korea’s abduction of Japanese citizens, my studies were almost completely isolated in academia. My theory on comfort women was expected to be recognized by some members of the academic community at last, when the Asahi Shimbun newspaper admitted in 2014 that some of its reports on comfort women were wrong. In fact, instead I was forced to resign from a university with which I was  affiliated a few years ago due to a protest by a member group of the university’s board of directors.

In 2005, as Japanese citizens grew interested in the North Korean abduction issue following five abductees’ return to Japan through then Prime Minister Junichiro Koizumi’s visit to North Korea in 2002, I applied for a “research grant” for a comprehensive study on the abduction issue from the Japan Society for  the Promotion of Science (JSPS). But my application was not accepted.

Under the act which creates the JSPS, which belongs to the education ministry, the  education minister “closely communicates with the SCJ on JSPS operations.” This  means that the JSPS is required to cooperate with the SCJ. Big names in respective fields of the academic community serve as screeners to decide whether to accept such  applications for the research grant. Until 2004, the SCJ recommended screeners, leading the dominant academic atmosphere to be reflected in the screening.

Rejection of Some SCJ Member Candidates was Legitimate

Academia must be normalized to reconstruct Japan as a normal  liberal democratic country. The Suga administration has taken a step to that end by exercising a legal authority to reject some of the recommended SCJ member candidates.

The ruling Liberal Democratic Party has begun to reconsider the structure of the SCJ’ as it exists. Legislative action should be taken to dissolve the SCJ. This would lead to the  normalization of academia.

EDITORIAL | Government Meddling? Or does the Science Council of Japan Need Drastic Reform?

(A version of this article was first published by the Japan Institute for National Fundamentals, Speaking Out #729 on October 22, 2020.)

Tsutomu Nishioka is a senior fellow and a Planning Committee member at the  Japan Institute for National Fundamentals and a visiting professor at Reitaku  University. He covers South and North Koreas.