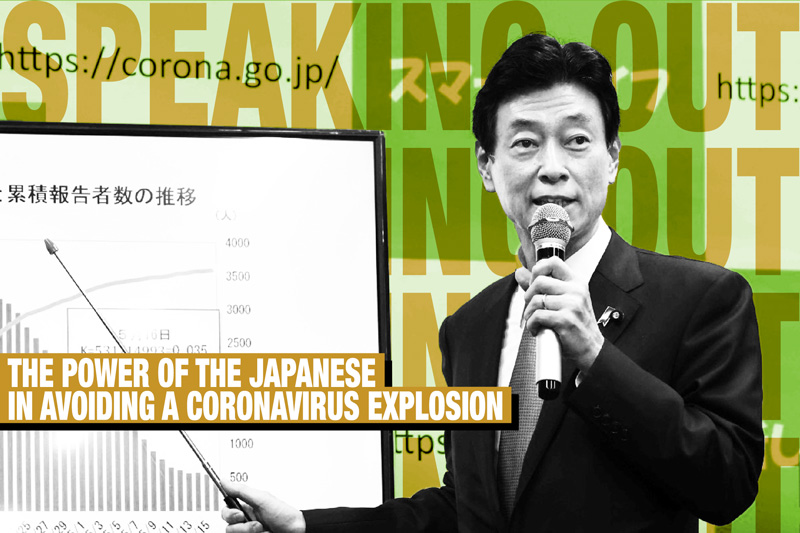 While the novel coronavirus has rampaged around the world, Japan has avoided an explosion of the infection and contained the virus in the initial phase of the battle. Yasutoshi Nishimura, minister in charge of Japan’s response to the pandemic, acknowledged this as he praised the strength of the Japanese people on the GenRon TV Internet program.

Before Prime Minister Shinzo Abe declared a state of emergency on April 7, Nishimura said he had engaged in a heated discussion with the Prime Minister over what message the government should deliver to the people.

Japan would have to cut human-to-human contacts by 80% and contain the virus to avoid an explosion of cases. The cut would require considerable efforts from the people. Could the government request such a steep cut by the public? Nishimura said he asked this question to the Prime Minister.

The Prime Minister then was quoted as answering: “The Japanese will surely be able to do that. Let us make the request.”

Abe decided to rely on the Japanese people’s higher public health consciousness, moral values, and sense of solidarity to overcome adversity. Thus, the Prime Minister declared a state of emergency in which the government only requested the cooperation of the public in the absence of any power to enforce its order, according to Nishimura.

Most of the Japanese people accepted the government’s request and took the necessary steps to voluntarily implement the suggested restrictions on their contacts with others.

The number of new infections has steadily declined. More recently, the government has partially lifted the state of emergency. Japan may be the only country that can achieve such excellent results, even in the absence of the government’s power to issue compulsory orders backed by punishments.

Polls have indicated an interesting response regarding these questions.

respondents gave high ratings to the declaration, although they also viewed it as too late.

The message from the polls may be that the Prime Minister should address any national crisis more quickly and decisively. It may also be interpreted as a criticism of the current constitutional and other legal strictures that impede the government from doing so.

Pandemic Paving the Way for Amending the Constitution

With such points in mind, Nishimura has argued for developing a legal structure that would allow the government to issue compulsory orders if it becomes necessary. That the people’s assessment of the Abe Cabinet’s crisis response is harsh indicates criticism against not only Prime Minister Abe and his government, but also postwar Japan’s deficient regime.

In a country that bets its people’s lives on the international community’s goodwill, and refrains from maintaining military forces under a doctrine that human nature is fundamentally good, there is nothing more the government can do beyond the insufficient response we have seen this time. This is the reason Nishimura’s argument for empowering the government to issue compulsory orders to protect people’s lives and health is persuasive.

Amending the Special Measures Act (for pandemics and natural disasters) involves adding an emergency clause to the Constitution. Regrettably, a discussion on the constitutional amendment is still far from being realized, even within the ruling Liberal Democratic Party. I hope that Nishimura’s positive attitude toward amending the Special Measures Act will lead to a relevant constitutional amendment, which must be achieved even if it takes time.

(A version of this article was first published by the Japan Institute for National Fundamentals, Speaking Out #679, on May 13, 2020.)

Yoshiko Sakurai is a freelance journalist and president, Japan Institute for National Fundamentals.