[Speaking Out] The Science Council of Japan Should Protect Academic Freedom 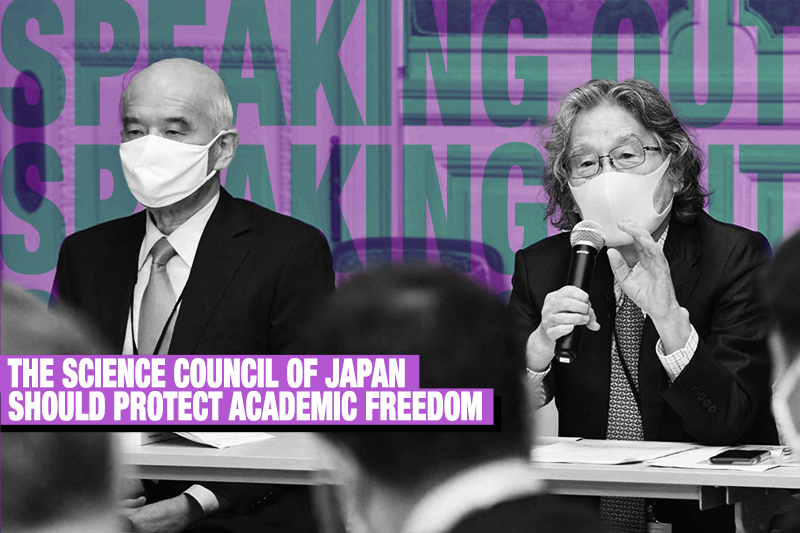 The Asahi Shimbun newspaper and other Japanese media have criticized the Suga administration’s refusal to appoint six of 105 candidates recommended by the Science Council of Japan for SCJ membership, saying the refusal runs counter to academic freedom. However, there is a precedent.

The then-Abe administration in 2016 was reluctant to accept the Science Council of Japan (SCJ) recommended candidates to fill vacancies caused by the age limit of 70. That left three positions unfilled. In November 2018, the Cabinet Legislation Bureau concluded that the government is not obliged to appoint SCJ members simply because they are recommended by the SCJ.

Who are the Rejected Candidates?

The names, affiliations, and activity histories of the six rejected candidates have been reported. The six opposed national security laws that permitted the limited exercise of the rights of collective self-defense and other security-related legislation.

University of Tokyo professor A (academic field: majoring in political thought history) opposed the Act on the Protection of Specially Designated Secrets enacted in 2013 and called for forming an “Association of Scholars Opposed to National Security Laws.”

Waseda University professor B (academic field: administrative law) set up an “Association of Waseda University Volunteers Seeking to Repeal National Security Laws” and issued a statement of protest against the government’s handling of a U.S. military base construction off Camp Schwab in Okinawa.

University of Tokyo professor D (academic field: modern Japanese history) proposed to establish a group named “Save Constitutional Democracy Japan 2014,” and raised opposition to any constitutional amendment and the Act on the Protection of Specially Designated Secrets.

Ritsumeikan University professor E (academic field: criminal law) criticized a bill in 2017 for revising the Act on Punishment of Organized Crimes and Control of Crime Proceeds as the worst postwar public order legislation.

Meanwhile, the SCJ has emphasized its rejection of studies related to the Ministry of Defense under the banner of a military research ban.

There is a case symbolizing the rejection. Hokkaido University applied in fiscal 2016 for the ministry’s security technology research promotion program, and the ministry adopted a study proposed by the university’s professor, Dr. M (academic field: fluid mechanics) for covering a ship’s bottom with fine bubbles to reduce navigation resistance. The epoch-making study would cut fuel consumption by 10%, not only for Japan’s Self-Defense Forces, but also for private sector tankers and ships.

In its statement on March 24, 2017, however, the SCJ criticized the study as a military research. The virtual pressure from the SCJ led the university to withdraw the study from the Ministry of Defense program in 2018.

The SCJ opposes national defense, which protects the lives and assets of the Japanese people. And it’s behavior appears designed to support assertions and activities of some opposition parties.

Though it is organized as an academic group of excellent scholars, the SCJ rather serves as a lobby group to deny academic freedom on its own. Kyosuke Nagata, chairman of the Japan Association of National Universities and president of Tsukuba University [one of Japan’s top universities for the sciences] took issue with the SCJ’s restrictive views of academic freedom on March 26 this year, when he told a press conference that it was his view that it there was nothing wrong with engaging in any research for self-defense sponsored by any government agency. I am among many researchers who agree with him.

Despite its position on research in Japan, the SCJ signed a memorandum of cooperation with the China Association for Science and Technology.

Now, at a time with China’s oppression of ethnic minorities, Hong Kong crackdown, the militarization of the South China Sea and other iron-fisted Chinese actions coming under international fire, the SCJ’s academic cooperation with China may need to be fundamentally reconsidered.

Correction: The original version of the article said “SCJ officials forced their way into the Hokkaido University president’s room.” This description proved wrong.

(A version of this article was first published by the Japan Institute for National Fundamentals, Speaking Out #724, on October 8, 2020.)

Tadashi Narabayashi is a professor emeritus at Hokkaido University and a director at the Japan Institute for National Fundamentals.